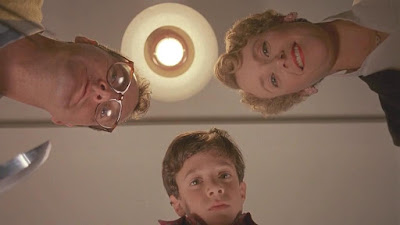 A couple of hundred years ago in subjective time, I did a lot of podcasting. I was a guest multiple times on “The Lair of the Unwanted” with Jason Soto and Nolahn. One of those times—it might have been my first go-‘round with them—Jason made me watch Parents, a horror-comedy film about cannibalism, kinda, that stars Randy Quaid and that was directed by Christopher Guest movie veteran Bob Balaban. Jason was incredibly excited that he was going to make me watch this movie.

I’ll give you the elevator pitch. An all-American family, Nick (Randy Quaid), Lily (Mary Beth Hurt), and son Michael (Bryan Madorsky) move to a new house thanks to Nick’s job for a company with the 1950s-style classic name Toxico. Michael is very much the weird kid and is plagued by strange nightmares. He’s also pretty convinced that his parents are cannibals and the “leftovers” that he has been eating since they moved to the new house are people, perhaps from the chemical Agent Orange-like experiments his father works on.

So let’s talk about the things that really work with Parents. The thing that works the best here is that it’s clearly set in a sort idealized version of Eisenhower’s America. Parents exists in that suburban landscape where all of the lawns are perfectly manicured, people have cookouts and play bridge and sip martinis and everything is exactly as they want it, not a hair out of place. In a lot of ways, it’s the sort of world depicted in the first part of Pleasantville.

Like Pleasantville (or Fido), there’s a dark underbelly to Parents. The film is a twisted version of Peyton Place in a lot of respects, and the connections here are intentional. One of the more intelligent aspects of the film is that we’re suspicious of Michael’s parents as possible cannibals for the entire running time, but for the first large part of the film—most of the first two acts—it’s entirely possible to see this as nothing more than Michael reacting to the idea of sex. At one point, he wanders downstairs in the middle of the night and catches his parents engaged in some not-understood sexual kink. Since we’re seeing this through Michael’s eyes, we’re not given a clear or rational picture of what is happening. Much of what is happening—until we clearly find evidence of his parents’ appetites—can be attributed to a dumb kid trying to figure out sex.

This view is given additional credence by the presence of Sheila Zellner (London Juno), the daughter of Nick’s boss and Michael’s classmate who might actually be stranger than he is. Sheila is an affected strange, though. She deliberately puts herself out as being weird (she claims to come from the moon) in a lot of ways to play with the mind and opinions of the naïve Michael. Sheila is taller than he is and much more sexually mature; at one point, she climbs into the family freezer, starts chugging wine, and tells Michael she won’t get out until he takes his shirt off. Events like this would certainly lead to an interpretation of the entire film being about sex.

In fact, Parents works for me up to the point where it becomes nearly impossible for this to actually be about Michael’s young child interpretation of what he thinks sex is. This happens when Michael’s counsellor (Sandy Dennis) comes to his house and we finally get actual evidence that his parents really are cannibals. Up to this point, it was sort of weird double entendre. And once that’s no longer a real possibility, the film is a lot less fun. This leads to an ending that I don’t quite buy. The film loses the plot once we hit the third act, and the climactic scene spins pretty hard out of control.

I do, however, enjoy the fact that a great deal of time is spent just making love to piles of meat with the camera. When we’re not sure what that meat is from, it’s disturbing—it’s actually more disturbing when we don’t know, because we don’t know if we should be repulsed by it or made hungry.

All of that said, this would be a fun film to put on a bill with other weird cannibal films (Ravenous, Delicatessen) or other films that go for that Peyton Place vibe (Pleasantville).

Why to watch Parents: Because campy cannibalism films are funny.
Why not to watch: It loses its way in the third act.