Film: A Beautiful Day in the Neighborhood
Format: DVD from DeKalb Public Library on the new portable. 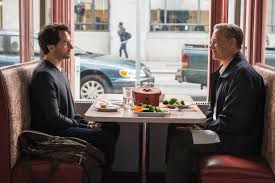 Like a lot of Gen-X, I grew up with Fred Rogers as a constant part of my childhood. When I was in my teens, bagging on Mr. Rogers was an easy go-to punchline. Like most teens, I was jaded and too cool for such things as the simplistic Mr. Rogers. Now, as an adult, I see just how wonderfully pure he really was. Fred Rogers would have been the first to say he wasn’t a saint, but he might be the closest we’ve seen to one in a very long time. Fred Rogers genuinely tried to see the good in everyone, and tried to show that good to everyone as well. The mantras he had of acceptance, of liking people for who they were, are easily mocked, but almost impossible to dismiss. Won’t You Be My Neighbor? only cemented this truth. The semi-fictional A Beautiful Day in the Neighborhood takes a different path, and while it focuses more on a fictionalized version of a real journalist, Fred Rogers (played by Tom Hanks very much channeling the man himself), casts a long shadow over the proceedings.

Our journalist is Lloyd Vogel (Matthew Rhys), a talented investigative journalist working for Esquire magazine. Lloyd, while a good writer, is a miserable son of a bitch by all accounts. He has a child with his wife Andrea (Susan Kelechi Watson), but he’s inattentive at best, spends very little time with the infant, and works too much. He’s cynical about his sister’s upcoming wedding (she appears to be a serial bride), and much more distressed when he discovers his father (Chris Cooper) will be attending. We learn over time that Jerry Vogel abandoned his family while his wife—Lloyd’s mother—was dying. Naturally, there’s a lot of anger just below the surface here. In fact, at the wedding, Lloyd and Jerry get in a fist fight.

Around the same time, Lloyd is assigned to write a short profile on Fred Rogers for an upcoming issue about American heroes. But, because Lloyd is a bastard and because the entire fucking planet misuses the term “skeptic,” we’re told that Lloyd is a skeptic of the true goodness of Fred Rogers. Even when he sees with his own eyes Fred Rogers interacting with a young Make A Wish child, he is cynically convinced that Mr. Rogers is just a character.

So what is the film about? It’s about Lloyd Vogel coming to terms with his father’s past and his own present. Much of this comes by indirect (and direct) intervention from Fred Rogers, who by all accounts, was the genuine article.

And so, I’m left in a very strange position here. There are multiple stages we go through with things we loved as a kid. As kids, we love things purely and unabashedly. As we grow up, we outgrow those things, at least temporarily, and are embarrassed by them. A little later, we start to like those things ironically. And then, once again as adults, we learn to love them purely and without shame once again. That’s where I am with Fred Rogers. He was truly among the best of what human beings could be. I’m predisposed to like this because he was who he was, and Tom Hanks channels him not flawlessly, but very well.

But the truth is that we spend most of the film with Lloyd Vogel, who is a complete asshole for the bulk of the film. This is a guy whose only real redeeming quality for the bulk of the running time is that he is a good writer. He’s not a good or decent person. There’s nothing about him that makes him interesting or worth following. Lloyd Vogel is a shitty human being juxtaposed with Fred Rogers, assisted by Fred Rogers, loved platonically and wholly by Fred Rogers, and completely unwilling and unable to see that for about 90 minutes of the film’s 109-minute running time.

And so, it feels to me like A Beautiful Day in the Neighborhood is mis-focused. I don’t care about the story that is being told. I want to see Fred Rogers. The film is at its best when Hanks is on screen. It’s also well directed. Marielle Heller (who also directed Can You Ever Forgive Me?) gives us moments here that are daring and that succeed because of that daring. For instance, there is a moment in the film when Fred Rogers asks Lloyd to sit in silence and, in true Fred Rogers fashion, think about those who “loved us into being.” Lloyd doesn’t want to, but is essentially insisted into it by a patient Fred Rogers. The camera sits on his face patiently, almost to the point of discomfort, but never quite getting there. It’s a gutsy choice and it pays off.

I love the constant connections as well. There are frequent cuts when Lloyd travels, for instance, to Fred Rogers Land of Make Believe-like sets of New York and Pittsburgh, and clearly puppet-like airplanes taking off and landing. It’s a connection to the worldwide neighborhood Fred Rogers created. In fact, the entire film is more or less framed as an episode of Mr. Rogers’ Neighborhood about his friend, Lloyd Vogel. It works, and it’s a smart way to frame the movie.

I want to like this more than I do. Actually, I just want the Tom Hanks parts of this. I can easily live without the life-altering of Lloyd Vogel.

Email ThisBlogThis!Share to TwitterShare to FacebookShare to Pinterest
Labels: A Beautiful Day in the Neighborhood, drama, Marielle Heller