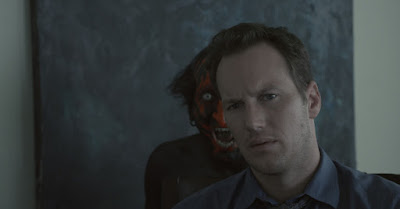 I think James Wan is underrated as a horror director. While I don’t love all of his movies, he does have a particular style that genuinely works. Insidious is a good movie if not a great one, but there are moments that Wan demonstrates that he is really good at what he does. In fact, one of the better jump scares in the film comes entirely from the way Wan directs the scene, getting the audience comfortable before dropping the hammer.

The problem is that at times it seems like he’s wasting his talent directing movies like Insidious. It’s actually a decent enough film for what it is. The problem is that it’s also a movie that very clearly telegraphs the story it wants to tell. This is not an original story despite being an original screenplay. If you’ve seen a haunted house or possession movie, you’ve seen Insidious.

In fact, the movie this most wants to be is Poltergeist. There are a lot of similarities to Paranormal Activity as well, but Poltergeist is the real goal. The high concept version of the plot runs this way: a family moves into a new house and experiences some strange events, including what seems to be unknown people in the house. One morning, one of their sons fails to wake up. While his unexplained coma persists, more strange events occur around the house. Eventually, we are given an explanation—the boy is an astral projector, and has gotten lost far from his body. Now that his body is empty, dangerous and demonic forces are attempting to use it to cross over.

It’s not hard to see the connection to Poltergeist here. Rather than the child being physically gone, he’s just “spiritually” gone while the forces on the “other side” are attempting to use him to get back.

Insidious has a really good cast for a PG-13 horror movie. The parents of the young boy are played by Patrick Wilson and Rose Byrne, with the grandmother played by Barbara Hershey. For me, the real star of the movie is Lin Shaye, who plays the medium/psychic/person who explains everything, the equivalent of Poltergeist’s Zelda Rubenstein. One of her assistants is played by Leigh Whannell, who also wrote the screenplay.

Honestly, the biggest issue with this movie is that you’ve almost certainly seen it in the main. While there are specific moments that can be shocking and surprising, and the end is really well written, the beats of the overall film are known to you as soon as you realize what the story is going to be. It’s known in the general if not the specific.

So let’s talk about exactly what makes James Wan a better director than films like this would have you believe. There are two moments in the film where Wan sets up a rhythm that he exploits for very good jump scares. In one, one of Elise Rainier’s (Shaye) assistants is helping with an initial check of the house to see if the family is experiencing a real haunting. He’s using a modified Viewmaster with colored slides to look at aspects of the house, the idea being that different shades or elimination of different light frequencies will show off spectral creatures. Well, we get a good one after we are lulled into a sense of security of several viewings.

The other example is one of the better jump scares in the last 20 years. Again, Wan sets up a rhythm, moving the camera from one character to another as we watch a fairly mundane conversation. And just when we think we’re safe, we get a shocking vision of the demon attacking the family just for a moment. It’s a genius bit of direction.

Wan needs to find better projects. He’s got talent, evidenced by the fact that he made a pretty good PG-13 horror movie. With better material, he’d be talked about in some rarified horror circles even more than he already is.

Why to watch Insidious: There are some genuine scares here.
Why not to watch: It wants to be Poltergeist and it’s really not Poltergeist.