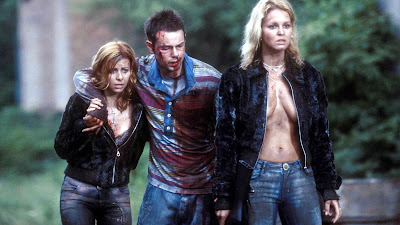 If you’ve listened to any of the reviews done by Mark Kermode, you know about Danny Dyer. How exactly do I explain Dyer? Danny Dyer is what you get if you start with Jason Statham and remove all of the physicality, toughness, and lowbrow charm. He’s like someone pretending to be Jason Statham, but having nothing to back it up. What that means is with a movie like Severance, I’m torn. This is a movie I’ve been interested in seeing since I knew about it, but the presence of Dyer in a prominent role gives me genuine pause.

The basic idea for Severance has tremendous potential. A group of people who work for a weapons manufacturing company called Palisade Defense is sent to a remote location for teambuilding exercises. Through a series of planned accidents, they are instead detoured to what proves to be a former asylum about which there are a series of rumors and legends. Soon enough, they discover that there are people in the woods trying (and generally succeeding) in killing them.

In most respects, Severance is a mildly updated “cabin-in-the-woods” movie. Instead of a group of teenagers or college students or camp counsellors, we’ve got military-grade weapons company executives. Beyond that, the premise is exactly the same. People are placed somewhere where they will be more vulnerable and they get attacked. It’s an old, old story when you come down to it. There are shades of movies from The Hills Have Eyes to Deliverance here. In fact, the pull quote on the DVD case calls this a combination of “The Office” and The Hills Have Eyes.

That is, bluntly, a very favorable comparison. The truth is that this is much closer to Hostel than it will ever by to The Hills Have Eyes. I say that not just because of its generic Eastern European setting, but because this is a film that is incredibly cruel in a lot of ways. Allow me to explain.

I have commented a number of times in the past that horror-comedies very much tend to lean into the comedy a lot more than they do the horror. It’s rare to find a film like Shaun of the Dead or Slither that genuinely gets a solid mix of horror and comedic elements. It’s even rare to find a film like The Frighteners or Behind the Mask where one half is comedy and the other is horror. Given the inherent issues of combining horror and comedy (although there are also some very clear advantages as well), most filmmakers decide to do more with the comedy, go for cheap gore and dumb jokes, and generally fail at both the comedy and horror.

Severance goes in entirely the other direction. This is very much a horror movie first, slasher technically, and a comedy second. There’s not a great deal of comedy here, and what is tends to be of the very blackest variety. But unlike a comedy with some horror thrown on the top, this is very clearly someone writing a slasher film that I think clearly influenced Hostel and then sprinkling a few comedic moments on top.

I say this not simply because Severance is clearly a horror movie first, but because of the level of cruelty that happens to the characters. Plenty of horror/comedies have terrible things happen to people (again, Slither, Shaun of the Dead), but few have such brutally cruel and mean-spirited things happen to otherwise innocent characters. In the course of Severance, people are gutted, decapitated, burned to death with a flamethrower, have limbs removed, and have their company logo carved into their bodies. These aren’t comedic deaths. These are torture, and never funny.

What it comes down to is that most horror/comedies try to be comedies with some horror moments and fail at both. Severance tries to be a horror movie with some comedy moments and generally succeeds at the former. It’s not a movie I’ll watch frequently, but it does have some moments in it that work pretty well.

That said, one of the ways I judge horror movies is whether or not I’d watch them with my sister, the only member of my family who likes horror movies. Some (like, say, Green Room) are simply too much for what I think is her tolerance. Others, like Severance end up feeling too cruel for her to enjoy. There’s no sense of justice in Severance; there’s just violence that is never really explained fully (we get a legend, but no idea if it’s true). It’s grim without having much in the way of redeeming itself.

So, while I didn’t hate Severance and may have even liked it a bit, it’s not one I find easy to recommend.

Why to watch Severance: It’s a hell of a story idea.
Why not to watch: For a comedy, it’s incredibly mean-spirited.