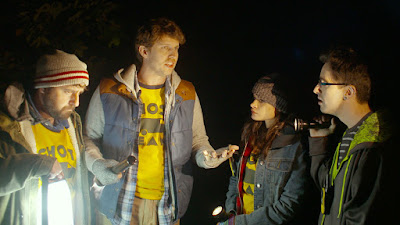 I like horror movies, and this is naturally the time of year when just about everyone is watching horror movies. I do get tired of a steady diet of them, though. Putting together this many reviews all at once has me kind of dazed and wanting a little change of pace. Something horror-adjacent would still be close enough, I figure, but not so close that I feel like I’m spinning my wheels. So, Ghost Team looked like it would fill the bill. This is a comedy, but appears to have some relationship with undead things, so it felt like a good choice.

I’ll spoil the surprise—it wasn’t a good choice. Ghost Team commits the biggest comedy sin: it’s not funny. It also commits the biggest movie sin that there is: it’s boring. I like a lot of the cast members here. There are plenty of people I have seen here in other movies and whose work I have enjoyed, but Ghost Team is boring, nonsensical, and a bit insulting to the intelligence of the average moviegoer.

Short synopsis: a paranormal investigation show is looking for a new cast member. Louis (Jon Heder), the owner of a small copy shop and man obsessed with the supernatural, dreams of ditching his life and doing something more with it, like being a ghost hunter. When a customer comes in asking for no trespassing signs because he believes his barn is haunted, Louis has the sudden inspiration to create his own ghost hunting team and see what they can find. And, if he finds any real evidence of the paranormal, his audition for the Ghost Getters is all but in the bag.

To do this, he recruits his team. These include his friend Stan (David Krumholtz), convinced that his fiancée was abducted by aliens because she left him at the altar; Zak (Paul W. Downs), his cousin who works at a Best Buy-like electronics store; Ross (Justin Long), a security guard who wants to be a cop; Victoria (Amy Sedaris), a psychic who runs ubiquitous ads on television; and Ellie (Melonie Diaz), a beautician who works in a store close to the one Louis owns. They decide to head out to the haunted barn to see what they can find out.

I’m not going to tell you what they find, because that is the big reveal in the movie, with the third act consisting of the characters dealing with what they have discovered.

Ghost Team wants to be a comedy that is less about the situation that the characters find themselves in and more about the personalities that find themselves thrown together. There’s going to be (not much) vague sexual tension between Ellie and Louis. Zak and Ross, we learn, dislike each other very much, particularly because Zak is consistently rude and dismissive of Ross. Stan is constantly depressed, often falling asleep wherever he is. And, of course, Victoria is a charlatan who only Zak really sees through.

The trouble is that these people aren’t funny. Oh, I’m aware that many of them are capable of being funny, but they aren’t given anything to work with in Ghost Team. They don’t do any funny things and they don’t say any funny things, either. The characters are exactly the stereotypes you think they are. Is Zak, the electronics whiz kid someone who talks like he’s Tony Stark? Of course he is. Is Ross, the wannabee cop, a guy who tries to be hyper-masculine but fails because that’s how we do comedy? Of course that’s the case. There’s a neat little slot for each character. I’m actually surprised that there’s not a Black character member whose personality is “being Black.”

As I said above, Ghost Team commits the biggest and most depressing sin that any movie can: it’s dull. I would love to tell you that this turned into a fascinating romp, but that would be a lie. There are no real laughs here to be had, the story isn’t that interesting, and the plot ends up using massive coincidences or freak occurrences to get to the resolution it wants. It fails on pretty much every level.

It’s not scary despite a couple of jump scares, but it doesn’t really want to be for most of the running time. I can live with that. But the fact that it’s not even remotely funny makes it a huge disappointment.

Why to watch Ghost Team: The cast?
Why not to watch: It’s dumb and it’s not funny.