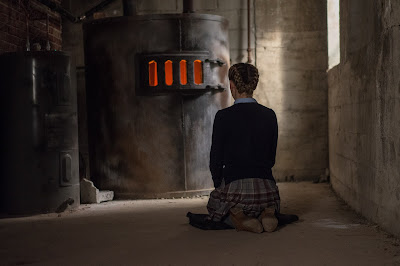 There is a trend in horror movies that perhaps has been around for longer than I’ve been aware of it. I’ve noticed it several times in the past, and someone is welcome to bring up a movie from before the last decade that follows this pattern, but it’s one I’ve really only noticed in movies from the past 10 years or so. That trend or common element is a movie that spends about two acts developing an atmosphere of dread or at least something disturbing and then going completely off the rails bonkers in the third act. Starry Eyes did this, as did Kill List and Honeymoon. I’m not specifically talking about a plot twist—I’m talking about a movie building up to something that turns out to be fully insane. That’s exactly what I experienced with The Blackcoat’s Daughter.

This isn’t to say that there isn’t a twist in this movie; there is, and it’s a big one. Naturally, this means that I won’t be spoiling it when we get there. The movie has three interweaving storylines. Two of these are clearly entwined, while the third connects with the others eventually. More or less, we figure that it’s got to be connected in some way because it’s a part of the same movie.

The main stories concern Rose (Lucy Boynton) and Kat (Kiernan Shipka), two Catholic schoolgirls at a boarding school. As a break approaches, the two are left behind. In Rose’s case, she has told her parents the wrong day to come get her because she believes herself to be pregnant and wants additional time to deal with the problem and/or find out if she actually is pregnant. In Kat’s case, she believes that, because of a premonition, her parents have been killed in a car accident. Rose is told to keep an eye on the younger Kat, but instead goes off to confront her boyfriend about her possible pregnancy. When she returns from confronting that boyfriend, she finds Kat bowing to the furnace in the school’s basement. Kat has a few seizures when no one us looking and seems to be prescient about the fate of her parents.

Meanwhile, Joan (Emma Roberts) escapes a mental institution and hitches a ride to Bramford with an older couple (James Remar and Lauren Holly), who are headed to a Catholic school (yes, that same school) nearby. At dinner, James tells Joan that he picked her up because he reminds her of his deceased daughter. They are headed to the school for their yearly vigil on the day their daughter was killed.

The third act of the film concerns Kat’s story for the most part and also serves as the link between Rose’s story and Joan’s. Because it’s the third act, I’m not going to discuss it here, even though it is by far the most interesting of the three acts.

In fact, it is this third act that more or less puts The Blackcoat’s Daughter in the same category as those films mentioned back in the first paragraph as well as any number of others that I’m sure I’ve seen but aren’t coming to me at the moment. The first two parts of the film are more or less there to give us the characters we will be dealing with and to set up the basics of the situation. They are also there to give us the atmosphere for the characters to exist in. The third act is the payoff for everything that the atmosphere has built. We’re expecting something to happen because of that slow burn, and when it does, it pays off big.

The Blackcoat’s Daughter is Oz Perkins’s directorial debut, and I have to say that I’ve liked what I have seen of him so far. I enjoyed this a great deal, mostly because the atmosphere that is built is extremely effective. Don’t get me wrong—this isn’t a directorial debut for the ages, but it is a very good one. Perkins is willing to give his stories and his characters a lot of space to breathe and grow. That feels rare these days.

Frequently, it seems like movies are going for that sort of “bread and circuses” approach to entertainment. I know that can feel like a fashionable thing to say, but there’s a lot of lowest common denominator art in the world. Treating the audience like it’s not made up of a bunch of idiots can only be a smart move, at least in terms of the art of filmmaking. Perkins is smart enough to see that—he’s going to get perhaps less of an audience, but he’s going to get a better one, and a more loyal one by giving us stories first, cheap thrills second.

At the very least, what this means is that the thrills aren’t cheap. They’re deeper and better and richer because we have to work to get there and we have to care to get there as well. If nothing else, that’s what makes The Blackcoat’s Daughter worth seeing.

Why to watch The Blackcoat’s Daughter: That third act.
Why not to watch: If you don’t like slow burn films, you won’t like this one.