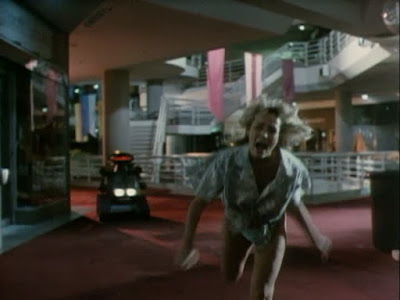 Friend of the blog Nolahn is a huge fan of a movie called Deathstalker II. He’s a big enough fan of that movie that he made me watch it. I bring this up in a review of Chopping Mall because both were directed by Jim Wynorski. In fact, these were consecutively directed by Jim Wynorski, and were his second and third movies, with Chopping Mall coming first. You can tell a great deal about a director by looking at that director’s oeuvre. Among the films Wynorski has directed include such magnum opera as Scream Queen Hot Tub Party, Alabama Jones and the Busty Crusade, and The Witches of Breastwick. Diving into his IMDb page is a strange journey.

At a faceless mall somewhere in America, a new security system is installed. When the mall closes, blast doors seal up the mall and the premises are patrolled by a trio of ED-209-like robots that, according to their press, incapacitate intruders and hold them until the police arrive. We’re also told, Westworld-like, that the system is infallible.

Queue the night the robot overlords go into effect. A quartet of couples have decided that this is the best night for them to have a late-night party in a furniture store in the mall. Couples Rick and Linda (Russell Todd and Karrie Emerson), Greg and Suzie (Nick Segal and the always-great Barbara Crampton), Leslie and Mike (Suzee Slater and Jim Wynorski favorite, Deathstalker himself John Terlesky) will all be giving the furniture a workout, while our two nerdlier partygoers, Alison and Ferdy (Kelli Maroney and Tony O’Dell) are set up on a first date. Basically, the plan appears to be to drink a bunch of beer, have a lot of sex essentially in front of each other, and then leave before the bots are released and the mall is shut down by impenetrable barriers.

So what could go wrong? A lightning strike hits the mall, fries the central operating computer, and causes the robots to go berserk. They start off by killing the maintenance team (which includes B-movie “That Guy” Gerrit Graham) and a janitor (B-movie veteran Dick Miller) before starting to focus on the romp going on in the furniture store. Since the bots are trained to stop thievery, this means they will happily charge their way into a department store to apprehend (or in this case, straight up murder) anyone still on the premises. Mike and then Leslie are quickly capped when they leave the store, and then all hell breaks loose. Our remaining sextet gets whittled down (and always in pairs, maintaining clear couple relationships even in death) as they move around the mall looking for ways to defend themselves. This includes a sporting goods store that clearly has a zombie apocalypse-worthy gun arsenal and a hardware store that inexplicably includes pre-filled gas cans.

I would love to tell you that Chopping Mall is what a screenwriter comes up with when they decide to see what would happen if someone took the brain of RoboCop’s ED-209, placed it in the body of a Dalek, and then had it role play as Paul Blart, but I can’t do that. Chopping Mall actually pre-dates RoboCop by a year, making it more likely that the futuristic stair-incapable robot was influenced by the Protectors created here. I’d also love to tell you that this is clearly someone trying to figure out what would happen if the “lightning makes robot self-aware” idea from Short Circuit went evil, but once again, Chopping Mall came first, albeit only by a couple of months.

Chopping Mall is, as should be evident by this point, a dumb movie. But it’s a fun one. It’s got huge, stupid plot holes in it, and no one is going to care. The robots fire lasers for some reason, but do so very badly, missing almost everything that they aim at. Why? Because why not?

In truth, Chopping Mall requires the audience to turn off its brain and accept everything on screen. It requires the people in the movie to be as dumb as they can be much of the time while actually coming up with decent plans to destroy the robots. This isn’t a movie that expect people to take it seriously. It’s going to give you 30 seconds of nudity and a few exploded heads, electrocutions (featuring terrible special effects) and at least one person lit on fire before we come to the conclusion less than 80 minutes after starting. It’s not going to change anyone’s life, but I can’t tell you it’s not fun.

And as an added bonus, inexplicably, Paul Bartel and Mary Woronov reprise their roles from Eating Raoul at the start of this. Evidently, the Blands opened a restaurant in this mall.

Why to watch Chopping Mall: It’s the most ‘80s thing ever.
Why not to watch: It’s another horror movie that depends on everyone being really dumb.