Ten Days of Terror!: The Burrowers 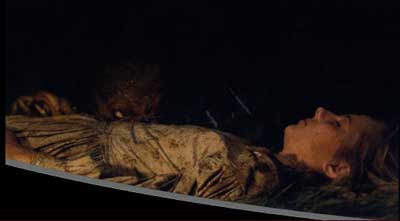 A lot of horror movies are combinations of the horror genre and another genre. Science fiction, for instance, has a lot in common with horror. I think that almost everyone who is a fan of one of those two genres is going to be a fan of the other. That’s less true for other genres, and yet those crossovers exist. There are horror comedies, horror musicals, horror romances, and more. With The Burrowers, we get a horror western, and there really aren’t enough of those. There’s so much potential for the horror western, and many of them (Ravenous, Bone Tomahawk and even movies like Vampire$ and Tremors have some Western flair) are a lot of fun to watch. So I was excited by the prospect of The Burrowers, which is a classic oater and also clearly a horror movie.

We’re going to dive head-first into pioneer territory as the movie begins. It’s the late 1870s, so post American Civil War. Irish immigrant Feargus Coffey (Karl Geary) proposes to his girlfriend, only to discover that she and the family she lives with has been either murdered or captured in the night. Naturally, the local natives, specifically a tribe of Sioux, is blamed for the crime. Coffey, as well as other locals including John Clay (Clancy Brown) and William Parcher (William Mapother) form a posse, and are soon joined by a military contingent led by the racist and condescending Henry Victor (Doug Hutchison). Soon after leaving the local settlement, the group captures a native and tortures him for information. What he provides is not what they expected—he tells of what the posse assumes is a tribe called “Burrowers” that have plagued the area for centuries. They used to feed on the buffalo herds, but since the herds have been mostly wiped out, they’ve switched to human prey.

What follows is essentially what you expect. The men travel across the landscape, typically misreading or misunderstanding what is happening around them. Members of the posse will get slowly picked off person by person, with each disappearance providing a little more information about what is truly happening. The most disturbing moment happens when the group comes upon a woman buried under a few inches of soil. It’s soon evident that she is not only still alive, but still conscious and knows what is happening to her. And eventually, the posse learns that the Burrowers are not so much a tribe as something far nastier and far less human.

I love the premise of The Burrowers. I’m actually surprised that there aren’t more horror westerns because the genres work so well together. Horror and science fiction are natural partners because both of them deal in many ways with the unknown. Westerns have a similarity as well. Westerns are about danger, about exploration, and about dealing with untamed (and perhaps untamable) landscapes. Horror is often about the same things. The only real difference between burrowing monsters that eat people and vast deserts is the manner (and speed) of dying. Being eaten by an unknown monster would be terrible. So would dying of a rattlesnake bite or a botched amputation from a duel gone wrong.

Where The Burrowers fails is that it doesn’t give us nearly enough. It seems like the film very much wants to be as mysterious as possible. It doesn’t want to reveal the creatures or give us too much information about them too quickly. It’s a good plan in general, but ultimately, the movie doesn’t fill in those gaps quickly enough. By the time we get to the end, there’s not enough there to really understand everything needed to get what is going on. It needs to be longer. In fact, I expected it to be quite a bit longer than it turned out to be. The film runs about 96 minutes including credits. My copy of it lists it as running 124 minutes, which I think includes the massive number of previews that come on the disk. In truth, it should have run closer to two hours—a lot would have made a great deal more sense if it did.

Still, I like the effort. There are some very genuine scare moments here, and The Burrowers is smart enough to not depend too much on jump scares and gross outs. It just needs to get to the good stuff faster.

Why to watch The Burrowers: The world needs more Old West horror films.
Why not to watch: It’s tamer than it should be.