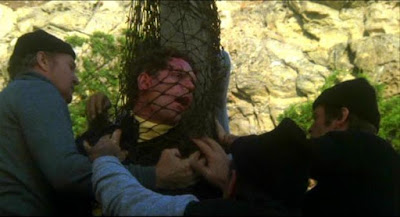 It can take a great deal to surprise me when it comes to a movie, so I’m always pleased when it happens. I put on Dead & Buried today on a kind of whim, since it’s a difficult movie to find. What I expected was a weird little horror movie that perhaps had a decent moment or two, but was likely to be forgettable. What a surprise to discover a genuinely good horror film that has a shock ending that works as well now as it did almost 40 years ago.

We start with a photographer (Christopher Allport) taking pictures somewhere on the Atlantic coast. He meets a young woman (Lisa Blount) and begins taking pictures of her. Thus distracted, he doesn’t realize as other people show up, start taking pictures of him, and then beat him senseless. Eventually, he is tied up and lit on fire while a crowd of people watch.

Shortly thereafter, a badly burned body is found in an overturned car. Local sheriff Dan Gillis (James Farentino) and local coroner/mortician Dobbs (Jack Albertson) arrive at the scene only to find that the body is still alive and is taken to the hospital. Another murder, this time of a transient fisherman takes place, and the circumstances seem exactly the same—he is suddenly surrounded by a number of people and brutally killed.

This is going to be a recurring theme, and while the sheriff is flummoxed by much of what is happening, the audience has a great deal more information. Specifically, we learn that the people who are cropping up around these killings are also the people we keep seeing around the small town of Potter’s Bluff. Sheriff Gillis starts discovering odd things about his wife Janet (Melody Anderson) that might be related to extramarital affairs, but also might be something a great deal more sinister. As the bodies start piling up Gillis starts discovering more and more disturbing occurrences, like the fact that the body of the photographer is missing from the coffin…with the exception of a heart. We also learn that Dobbs is frequently upset that he’s not allowed to work cosmetic magic on the bodies that are piling up, as he takes tremendous pride in his ability to restore badly damaged bodies.

The biggest issue with Dead & Buried as a movie is that it feels very difficult for it to find its audience. This is a surprisingly highbrow horror film that has a real plot and a clear sense of mystery that all builds to a very surprising third act. It’s a film that works better the less you know going in (which is why I’m stopping with the plot), so it would appear that it’s a film that is very much geared toward people who like their horror with a touch of the cerebral. At the same time, it’s not a film that shies away from the violent and bloody. There are plenty of gore moments here, but not nearly enough for die-hard gore hounds. So, the effete horror fan will be put off by the gore while the gore fans will wonder why there’s not more of it and why there is so much emphasis on the plot.

In that sense, Dead & Buried feels like a film that is right up my alley. I don’t mind gore when it makes sense for the film in question, and I do tend to like my horror movies on the smarter end of the scale. In that respect, I found this to be the best of both worlds. I was legitimately surprised by the revelations in the third act, and that doesn’t happen as regularly as I would like it to. It’s always nice to be genuinely surprised by a film, and it’s even nicer when that happens with a movie that came out when I was just starting my sophomore year of high school.

I enjoyed the hell out of Dead & Buried. This felt like a movie-length version of a Twilight Zone episode all the way from the opening moments to the closing credits. The mystery of what is really happening works the whole time, and while it’s probably possible to figure out what is happening before the big reveal, it’s also a film that is likely to offer others the same joy of being genuinely surprised by the ending.

The damn shame is how unknown this movie is. It should be a lot better known and appreciated and a lot more people should be praising it. It’s as good or better than just about every other horror movie of the same vintage.

Why to watch Dead & Buried: The shock ending really works.
Why not to watch: It’s way too hard to locate.