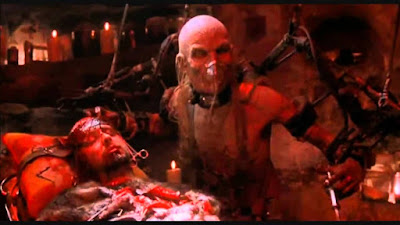 If I remember correctly, House of 1000 Corpses was one of those movies that had a weird development history. I think there was a trailer for it several years before the film actually dropped. I knew about it at the time and had no real interest in seeing it, and now that I have seen it, I’m not entirely sure what to make of it. There’s a definite sense of style here, or at least there wants to be a sense of style, but I’m not sure how good the damned thing actually is.

House of 1000 Corpses is a film that is almost entirely plotless. The traditional group of young people are on a long road trip to discover weird roadside attractions. The quartet is made up of Jerry (Chris Hardwick), Bill (Rainn Wilson), Mary (Jennifer Jostyn), and Denise (Erin Daniels). They discover Captain Spaulding’s Museum of Monsters and Madmen. Spaulding (Sid Haig) tells them of a local legend called Dr. Satan who was eventually captured and hanged from a nearby tree. He draws them a map, and off the four go. The pick up a hitchhiker named Baby (Sheri Moon Zombie, wife of director Rob Zombie) along the way, who leads them to her house when the group has car trouble.

What follows is, more or less, The Texas Chainsaw Massacre with a lot more interaction between the eventual victims and the family of crazy people. Among our violent, criminal, murderous Firefly family are Otis (Bill Moseley), Grandpa Hugo (Dennis Fimple), Tiny (Matthew McGrory), Rufus (Robert Allen Mukes), and the mother (Karen Black). And a weird dinner progresses, followed by a bizarre Halloween show that almost ends violently. More or less, the four leave because their car has been repaired, but when they try to open the gate to get the car through, they are all attacked and dragged back to the house. Terrible things ensue.

And while I get the point of this, I don’t really understand the point of this. There is no plot here, and there’s nothing that happens beyond a bunch of people getting killed either very quickly or very terribly and slowly. There’s nothing here to really recommend the film in any real sense. You’re not going to learn a hell of a lot, and there’s not a point that the film is trying to make. It really just wants to be gory and nasty and freak people out. Sometimes that’s enough, but it really isn’t enough here.

There are some very funny things here, though. I love the fact that many of the characters are named for Groucho Marx characters. Rufus T. Firefly, Otis B. Driftwood, and Captain Spaulding in particular are Marx characters, and I enjoy that reference. I also really enjoy Sid Haig in this film a great deal. Haig was never going to be a mainstream actor. He was always going to be in weird films like this one or Spider Baby, but he was absolutely the kind of actor who would play any role like he was actually living it. That’s his Captain Spaulding—he comes across like a real person who would actually exist in the real world. Haig isn’t playing the role; he’s inhabiting it.

But the rest of the movie is really just nasty and without any real point or merit. It’s gross for the sake of being gross, and I don’t really have a ton of interest in that. On top of this, we have the character of Baby Firefly. I realize that there is a particular type of guy who finds that “dangerous baby doll” persona interesting, intriguing, and sexy, and that guy is absolutely not me. Her little girl laugh is, I think, supposed to be part of her charm and it’s just an instant turn-off. It’s a movie I didn’t like to begin with, and her presence made it worse.

Why to watch House of 1000 Corpses: Sid Haig.
Why not to watch: Sheri Moon Zombie’s laugh.