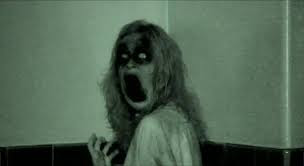 I don’t love found footage movies as a general rule. While there are a few exceptions, they all tend to flow together for me at some point. We get some set up of our protagonists going somewhere and doing something in a place that is supposed to be dangerous, bad things happen, there’s a lot of shaky cam and night vision footage, and everybody dies. The ones that work best for me are the ones that either did something relatively new (The Blair Witch Project), go outside of the genre (Chronicle), or don’t follow that basic path ([REC]. Grave Encounters does none of those things. It follows the basic formula to the letter, and while it does provide a few decent scares (and one very iconic moment), there’s not a great deal here that you haven’t seen before.

The set up is that we’re dealing with a reality television show called “Grave Encounters” that is more or less the precursor of the ghost hunter shows on The History Channel and the like. A team of paranormal investigators goes into supposedly haunted places and sees if they can find any evidence of the supernatural. We’re told by the show’s executive producer (Ben Wilkinson) that what we’re going to be shown has been edited down from the recovered footage of the proposed sixth episode of the show. In this episode, the team investigates the abandoned Collingwood Psychiatric Hospital, where a number of paranormal and unexplained phenomena have been reported. We get a little background—like one of the doctors at the facility had a penchant for lobotomies and was eventually killed by the patients. We also get a little bit of the history of the place in general.

The raw footage from the show proceeds, and we’re introduced to the team. Leading the Grave Encounters team is Lance Preston (Sean Rogerson), specialist in the occult Sasha Parker (Ashleigh Gryzko), fake spiritualist/medium Houston Grey (Mackenzie Gray), cameraman T.C. Gibson (Merwin Mondesir), and the guy who runs all of the surveillance equipment Matt White (Juan Riedinger). The crew is locked into the facility at night by the caretaker (Bob Rathie) with the promise that he will come back in the morning and unlock the doors for them.

This proves to be a very bad choice. Naturally, things start slowly and we get a few glimpses of supernatural activity. A window opens by itself. A door slams shut. A character talking on his phone sets the camera down and doesn’t notice as a wheelchair behind him moves of its own accord. And, naturally the scares start to ramp up. Eventually, they realize that the hospital absolutely is haunted by something, and it’s going to get a lot worse.

It is soon evident that Collingwood is its own dimension. When the caretaker fails to return on time the next day, there is initial concern, but it soon proves to be much more than them simply being abandoned. By midday, it is still pitch black outside. Corridors go on endlessly or loop back on themselves. Exit doors lead to more corridors. Staircases to the roof are closed off by solid walls. The food they have packed spoils immediately, and as their batteries run down in their lights and cameras, the unquiet ghosts of the facility become more and more active.

For someone who likes found footage films, there’s a great deal to like here. Some of the scares are genuine, and even before we get to the really scary moments, there are some nice creepy moments here and there. The characters aren’t immediately unlikable (although Lance comes across as a bit of a prick), and that help as well. Giving us a situation where they are effectively trapped in some pocket dimension of evil is a nice touch as well.

The problems with Grave Encounters are going to be exactly what you think they are, because they are the problems with most found footage films. There’s a great deal of shaky cam footage here, and I have a genuine problem with too much shaky cam. It’s not that I have a problem with the idea; it’s that I genuinely get something like motion sick if there’s too much of it right in a row. A lot of the film takes place in night vision as well, and I find that tiresome and tiring. Used in places, it can be really effective (see the end of [REC] for an example, or the end of The Silence of the Lambs). Used to this extent, it becomes just a gimmick that is used too often.

I liked Grave Encounters well enough, but not enough to hunt down the sequel. From what I understand, the sequel purports that the original film was fictional, but was also cursed and the actors from the first film were genuinely killed, a smashing of the fourth wall that feels entirely unnecessary.

It feels like a cop out to say that if you like found footage, you’ll like Grave Encounters. It is a pretty good exemplar of the style, though, so I think that idea holds. If you’re not a fan of the style, this isn’t going to make you one.