They'd End Up Calling Me "Chicago" 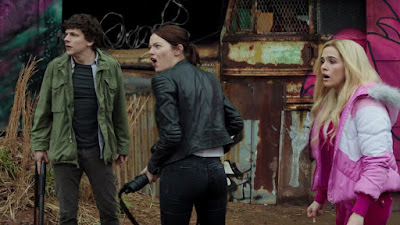 A sequel to Zombieland was inevitable. I’m most surprised, in fact, that it took a decade to get there. The original film quickly became a favorite of a lot of people. While generally standard zombie fare in terms of the action, it gave us characters that were a lot of fun, a specific character who was like a Max Brooks character come to life, and, of course, one of the great cameo appearances in film history. And thus, Zombieland: Double Tap, which even plays into the appeal of the first movie in its name.

So, we’re back with the same quartet of characters. Tallahassee (Woody Harrelson), Columbus (Jesse Eisenberg), Wichita (Emma Stone), and Little Rock (Abigail Breslin) have decided to move into the White House, and spend their time using American treasures for their own entertainment and letting Tallahassee spend time in the Oval Office, possibly with greater skill than we have at current. Little Rock is restless, though, and wants people her own age. When Columbus proposes to Wichita using the Hope Diamond, it becomes enough impetus for the sisters to hit the road. They leave, taking Tallahassee’s modified presidential limo, now equipped with a roof-mounted mini-gun.

Roughly a month later, Tallahassee and Columbus meet up with Madison (Zoey Deutch), a clueless deb who has survived specifically by living in the freezer of a Pinkberry at a nearby mall. Columbus takes her home, and just post-sex, Wichita shows back up. As it happens, she and her sister picked up a hitchhiker they called Berkeley (Avan Jogia), who eventually convinces Little Rock to head off with him to a commune called Babylon. So, naturally, they are going to head out to find her, this time with Madison in tow. Along the way, sticking with city names, we’re going to meet Nevada (Rosario Dawson), who shares Tallahassee’s love of all things Elvis. We’re also going to meet Albuquerque (Luke Wilson) and Flagstaff (Thomas Middleditch), who are alternate universe versions of Tallahassee and Columbus.

Anyway, there are going to be a couple of zombie battles and a big climax, of course. One of the things that moves the plot is the reveal of multiple zombie types. There are Homers (dumb, not worth the ammunition), Hawkings (smart and capable of tool use), and ninjas (silent and stealthy). New to the world are T-800s, who take multiple shots to kill, and even then won’t really stay down.

Tonally, Zombieland: Double Tap is very different from the first film. Zombieland was very much a comedy, of course, but it was comedy rooted in the zombie subgenre. There were some genuine scares in Zombieland, if only of the jump variety. That’s not the case here, where the film is very much played for comedy. Until the last few minutes of the third act, it never really feels like the characters are in a great deal of danger. We know, after all, that this is a comedy, and that our characters are almost certainly going to pull through. Neither of the films really delved into dark comedy, so it would be a very odd thing to happen here.

In that respect, Double Tap is smart. It doesn’t really use the zombies for comedy more than once or twice, but instead sticks with our human characters and their relationships for the funny. This is the right thing to do, especially because, for a zombie movie, there really aren’t a lot of zombies in it aside from one scene in the opening, another in the middle, and the big climactic battle at the end.

There are good moments in this. I enjoyed watching it, and there are some genuinely funny moments. It stays true to the characters in general, even if we don’t get a lot of time spent with Little Rock. Truthfully Woody Harrelson is the best part of these films, and so the film tends to be better in general when he is on the screen.

All of this said, Zombieland: Double Tap feels like a step down from the first movie. Perhaps expectations were too high. Perhaps it just feels a little more cynical in some ways, or like it’s trying too hard to be funnier than the first movie. Whatever the reason, some of the magic is gone here, and while Double Tap is fun, it can’t hold things together. The third act, which should be the climax of the film, requires so many of the characters to be unbelievably stupid that, for as entertaining as it is, it just doesn’t hold together as it should.

So, while it’s good, it’ll be a long time before I think about watching it again, and I can hope that we’re done with these characters. There’s not really much left to say about them.