Ten Days of Terror!: Revenge of the Creature

Films: Revenge of the Creature
Format: DVD from Cortland Public Library on The New Portable. 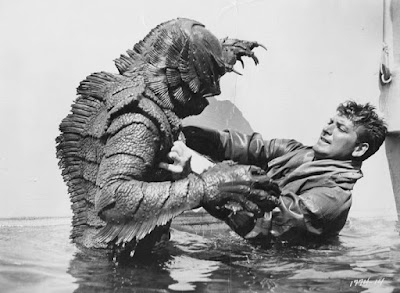 There’s plenty of old-school horror in the original Universal monsters, but not a great deal that’s genuinely scary. What’s interesting is just how many of the monsters are, once you dig past the horror trappings, really tragic. The Gill Man, better known as the Creature from the Black Lagoon, is one such tragic monster. While much of his tragedy is the story, perhaps the bigger tragedy is that he never got a really good sequel. Revenge of the Creature is about as good as we’re going to get for him, the poor fishy bastard.

So what’s wrong with the sequel? Well, for starters, it stars John Agar, the square-jawed, mostly talentless version of an A-list actor in B-list movies. A lot of Agar films, including this one, wound up on Mystery Science Theater 3000. I have, in fact, seen the MST3K version of this film so many times that I remember particular quips from it. Still, it’s only fair to give this its honest due for this website.

We’re initially going to follow the basics of the original story as a couple of scientists show up to capture the creature on the same boat with the same captain as the previous film. This time, however, they’re going to be successful in bagging the creature and taking him back to Florida to exhibit at a Sea World-style aquatic zoo. Here he will be attended to by Joe (John Bromfield) and studied by Professor Clete Fergusson (John Agar) and Masters student Helen Dobson (Lori Nelson). Naturally, the Gill Man is going to escape and cause havoc, and, true to form, he’s going to attempt to kidnap Helen because, well, fish gotta spawn, baby!

To give you an idea of exactly the level of what we’re talking about here, a substantial amount of the film is going to consist of Clete making romantic overtures toward Helen and more or less attempting to rebuff an equally horndoggish Joe. Helen, of course, is not really going to be given much of a choice in this. She’ll be referred to as “cake” by Clete, and more or less told that once the Professor leaves the oceanarium, she’ll be more or less the target of Joe’s sexual advances for as long as she remains studying the creature.

Honestly, the whole thing doesn’t really kick into high until the second half of the movie when the creature, enraged by being shocked and prodded in the name of training and enflamed with lust for the swimsuit-clad Helen, breaks free of his chains and goes on a rampage that includes tipping a car and, in one hilarious moment of terrible special effects, hurling a guy very clearly attached to a cable into a palm tree. Based on that moment, the Gill Man would make a nice prospect for many a baseball team; he has a rising fastball.

For me, the best part of the film happens early on, as we see Clete in his “natural” laboratory environment doing “animal science” stuff, none of which seems to have any connection to anything else. Like, he’s teaching a chimp to paint, or something, and doing another experiment with a cat trapped in a cage with four rats under the assumption that the cat won’t kill the rats if it’s well-fed. The lab assistant who comes to talk to Professor Clete about it is an uncredited Clint Eastwood in his first-ever film role. That right there is worth the price of admission.

Truthfully, this isn’t a terrible movie by any stretch, but it’s also not a very good one. I find it nearly impossible to take John Agar seriously since he featured in so many MST3K movies, and because his head is almost exactly the same shape as an old-school ice cube. This would honestly be better without the forced romance and with someone completely generic in the “hero” role.

That said, the Gill Man never really got the respect he deserved as a monster. He’s easily forgotten as a classic Universal monster because he’s from a different era and because he’s not attached to a classic book or legend. But in many ways he’s the most disturbing of the monsters and the one that is perhaps the most upsetting because of just how unpredictable he was. He’s also the most interesting in terms of the technology used to create the monster—for all that the story is goofy at times, he looks damn great on screen.

Honestly, you can probably live without this sequel, but if you need more Gill Man, it’s right here for you.

Why to watch Revenge of the Creature: The Gill Man was pretty great.
Why not to watch: He deserved a better sequel.