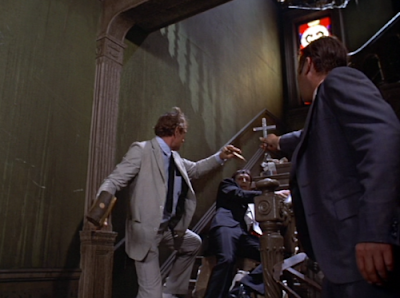 If you are or were a fan of The X-Files, you should find the time to learn about The Night Stalker. There was a one-season television show from the mid-‘70s that I remember in part. The show followed a reporter who, every week Scooby Doo-like, encountered something strange or paranormal. The difference was that, unlike Scooby Doo, the villain was never Old Man Jenkins who ran the old carnival, but actually were supernatural or otherworldly. I particularly remember an episode that was a play on the Headless Horseman story, featuring instead a headless motorcyclist. What I didn’t know was that the show came from a pair of made-for-television movie, The Night Stalker and The Night Strangler.

There is a certain continuity here. The Night Stalker, the original movie, takes place in early ‘70s Las Vegas, where reporter Carl Kolchak (Darren McGavin) is working a beat. Kolchak, we learn over time, has been released from large market papers all over the country, with Vegas simply being the latest place he’s decided to ply his gadfly/fly in the ointment brand of journalism. Actually, this only becomes evident after a few minutes. The actual opening of the film is Kolchak sitting in a cheap motel room listening to a tape recording of his own voice narrating the story we are about to hear.

Kolchak is called back from a vacation to investigate a series of murders. All are of young women and all involve the women more or less being drained of blood—this is the word from the local coroner (Larry Linville! Frank Burns getting another medical role!). Kolchak begins his investigation, and it’s his belief that the murders are being caused by someone who thinks he is a vampire, a theory laughed by everyone, including the sheriff (Claude Aikens) and the local FBI guy (Ralph Meeker), but is at least mildly endorsed by the coroner.

Since this is classified as a horror movie, you should guess where this is going. It is an actual vampire, a man named Janos Skorzeny (Barry Atwater), who has killed off multiple women and been suspected of similar crimes for decades. Kolchak, urged by his casino dealer/possibly prostitute girlfriend (Carol Lynley), is the first to believe in the actual idea of a vampire. As he investigates using all of his local resources (which include Elisha Cook Jr.), he becomes more and more convinced that Skorzeny is the real thing. He makes a deal with the local police—they will treat Skorzeny as a vampire based on his urgings if he gets an exclusive on the real story.

The biggest problem with The Night Stalker is that it was made with the idea of needing to be riddled with commercials. Because this is the case, it’s only about 75 minutes long, which is not nearly long enough to include everything that should be here and have enough going on. It honestly feels like there’s not much of a second act. The vampire is dealt with at what seems like should be the beginning of the third act rather than the end of the movie. This could desperately do with another half an hour. There’s no cat and mouse here—Kolchak figures out where Skorzeny lives and hunts him down with a stake.

On the other hand, The Night Stalker does a number of things really well. For starters, it’s far darker than we’re going to expect going in. I don’t mean that in the sense that there are horror elements that are surprising. I mean that in the sense of how it actually ends. The reactions and actions of everyone who isn’t Carl Kolchak are actually quite chilling. The response to a real vampire stalking the streets of Las Vegas is sadly believable, but also terrifyingly fascistic, which takes us to what is a rather nihilistic ending. It does, however, set up the sequel film and the eventual television series perfectly—this is not a case where a retcon is needed.

I love the idea here, and I love the character of Carl Kolchak. There’s something almost Lovecraftian about Kolchak as a character. Over and over (in the television series especially), Kolchak would encounter terrifying monsters and the supernatural armed frequently with a notepad and a tape recorder. That’s pretty damn great, because it gives us a hero that is always in danger and always on the ragged edge of being overwhelmed by the forces of darkness.

I don’t know why this wasn’t better known and why the show didn’t take off. But I do now want to track down all of those shows and watch them again.

Why to watch The Night Stalker: It’s a horror movie police procedural.
Why not to watch: It’s not nearly long enough.