Cancer of the Pseudonym

Film: The Dark Half
Format: Streaming video from Tubi TV on the new internet machine. 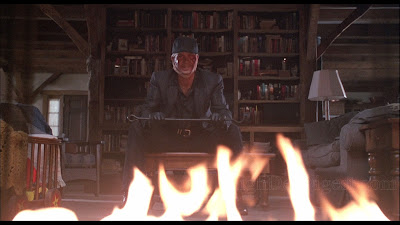 Stephen King sometimes recycles locations and, because of this, characters. Sheriff Alan Pangborn, the thin blue line in the city of Castle Rock, Maine. If you’re watching “Castle Rock,” you know the character, played by Scott Glenn. Alan Pangborn shows up in a few of King’s novels, and thus a few of King’s movies. In The Dark Half, Pangborn is a more minor character, but he’s also played by Michael Rooker, which is a strong point in the movie’s favor.

The Dark Half is very much a film tied to King’s own career. Just as Misery was a sort of evil love letter to his fans, The Dark Half is King coming to terms with his alter-ego, Richard Bachman. There are a lot of parallels here between the film’s main character, writer and professor Thad Beaumont (Timothy Hutton), and his pseudonym-come-to-life George Stark (also Timothy Hutton).

We start with a young Thad (Patrick Brannan), who is starting to write stories. Simultaneously, Thad is having strange attacks that are eventually diagnosed as a brain tumor. But, as we see in graphic detail, it’s not so much a tumor as it is an incompletely absorbed twin that has begun growing in Thad’s brain. The body parts removed, Thad grows up without incident and becomes a writer who is critically successful but not monetarily so. And this is where his pseudonym comes in. As Thad Beaumont, he writes artistic and “important” novels. As George Stark, he writes violent potboilers that may be artistically trash, but sell millions of copies.

Everything starts when Thad is approached by Fred Clawson (Robert Joy), who has discovered the secret identity of George Stark. He threatens to blackmail Thad if he’s not paid off. Thad and his wife Liz (Amy Madigan) decide to deal with the blackmail by coming clean themselves. They clear the story with Thad’s agents (Rutanya Alda and Tom Mardirosian), and People Magazine(!) sends out a writer (Kent Broadhurst) and photographer (Glenn Colerider) for the story. They have a little ceremony burying George Stark in the Beaumont family plot. And then, of course, all hell breaks loose.

George Stark, essentially, becomes incarnate, and he’s not happy at the thought of being killed off in this way. And so he begins taking revenge on everyone who helped with his “death,” starting with the photographer, Thad’s agents, the magazine writer, and more. George is not a subtle revenant, usually doing his dirty work with a straight razor, although he beats the photographer to death with the man’s wooden leg. Worse for Thad, the crimes all point to him, especially since George Stark, as a sort of alter ego of Thad Beaumont, looks like him and even has his fingerprints. However, several of the crimes happen when Thad is under surveillance, which kind of clears him, even though Sheriff Pangborn isn’t so sure.

There are some aspects of The Dark Half that I rather like. I like the presence of Julie Harris, for instance, who shows up as one of Thad’s colleagues who helps him figure out what might be happening. And, honestly, I love seeing Michael Rooker as a cop. Rooker is always fun in any movie, and I would have loved to see more of him in this.

There are some real problems here, though, not the least of which is the premise itself. I don’t mean the whole “alter ego becomes real” thing, but the fact that Thad Beaumont is so worried about people finding out that he is actually George Stark. I read a couple of King’s Bachman novels just about the time it was suspected that he was Bachman. Shortly thereafter, when it became common knowledge that King and Bachman were the same person, Bachman’s novels starts selling like crazy. Admittedly this is the opposite, but if the pseudonym is the popular author, might this not increase the sales of Thad Beaumont’s work? And even if it doesn’t…why would anyone really care? Hell, I’ve written a few things under a pseudonym, and if someone found out, I wouldn’t really care that much. Why would I?

Once again, it’s a case where the story falls apart in terms of the verisimilitude. I’m happy to willingly suspend my disbelief for a character who falls apart physically because he’s not writing and starts to heal when he starts writing. I’m willing to buy the idea of gigantic flocks of birds showing up because of the evil of the pseudonym-made-flesh. But the idea of someone being that worried about being outed as a successful writer? It’s not like the college Thad Beaumont works at would fire him.

There are things to like here. Amy Madigan is the classic ‘80s/’90s wholesome film mom, for instance. And a lot of what makes King a good writer comes through in the characterization of his minor characters. But I couldn’t get over that initial hurdle. And beyond that, the idea that George Stark would so willingly put the man who holds his existence in such clear jeopardy has those same problems with verisimilitude. I wanted to like this, but there are too many problems.

Why to watch The Dark Half: A fun idea.
Why not to watch: A large buy-in for that premise.

Email ThisBlogThis!Share to TwitterShare to FacebookShare to Pinterest
Labels: George Romero, horror, The Dark Half