My Dog Wasn't This Dangerous

Film: The Hound of the Baskervilles (1939)
Format: Streaming video from Tubi TV on the new internet machine. 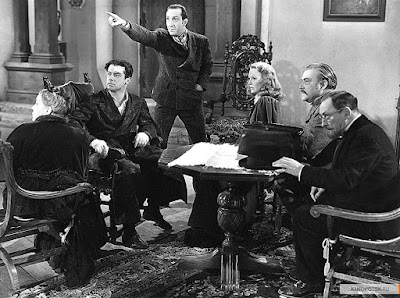 About 20 years ago, we decided to get a dog. It was a rare case where I named the pet before we got the pet; I decided that no matter what, that dog was going to be named Baskerville. Bass lived to 16, and my mother never once failed to complain that I had given this name to a corgi mix and not a hound. Anyway, The Hound of the Baskervilles (the 1939 version) has long had a place close to my heart. I’ve seen other versions of this and I’m familiar with the source material in this case. It’s a good story and this is the first pairing of the classic Basil Rathbone/Nigel Bruce version of Holmes and Watson.

Our story features Holmes and Watson solving the case of a young man named Sir Henry Baskerville (Richard Greene). Sir Henry has just inherited Baskerville Castle on the Scottish moors because of the sudden and surprising death of his uncle. As it happens, there is an ancient curse affecting the Baskerville family. Because of the depravity of an ancient ancestor, the Baskervilles are cursed to be attacked by a giant spectral hound. While the previous lord of the manor is said to have died of a heart attack, many of the people of the area are blaming the hound.

Naturally there are going to be a number of twists and turns. We’re going to have to have a romance, in this case between Sir Henry and Beryl Stapleton (Wendy Barrie), who lives with her brother John (Morton Lowry) on the moors. Also hanging around are Sir Henry’s servants, Barryman (John Carradine) and his wife (Eily Malyon). Neighbors include the occult-adjacent Mortimers (Lionel Atwill and Beryl Mercer) and the film’s comic relief, Frankland (Barlowe Borland). There’s also a man roaming the moors (Nigel de Brulier). At least one of these people will be behind the plot to kill Sir Henry, and there might even actually be a hound as well.

Sherlock Holmes stories follow a particular pattern, and The Hound of the Baskervilles follows that same basic pattern—it is an early Holmes story in the Conan Doyle chronology, so it makes a particular amount of sense that it would be an exemplar of that pattern. For instance, we’re going to get a moment at the beginning where Holmes is going to give us a sample of his “deductive” prowess. A visitor (who turns out to have been Dr. Mortimer) has stopped by and left his walking stick. Holmes asks Watson to figure out what he can from the stick. He gets a few things right, but it’s Holmes who gets the most interesting things just from the stick itself. In this scene and others, Watson’s job is simply to be astounded by the mental capacity of Holmes.

That, in fact, is going the be the entire purpose of Nigel Bruce’s Watson for the entirety of the drama. His entire raison d’etre is to get everything wrong so that Holmes can then correct him and get everything right. While the aforementioned Frankland is going to exist almost entirely as comic relief for the film, Watson is the same thing. He gets everything wrong, stumbles into things and is more or less a doofus who exists to make Holmes’s life more difficult. More modern versions have given Watson so much more purpose than just being alternately astonished and wrong.

But for all of the minor faults that The Hound of the Baskervilles has, it’s genuinely a lot of fun. This is a really good story, has some nice twists and turns (although some of them are ones you couldn’t get from this version of the story), and gives us fun characters to watch. It’s also a film that really works in the last 15 minutes. Based on when this was made, you know that ultimately the good guys are going to win and the bad guys are going to lose, but there are some real moments of tension here.

The main thing that doesn’t work is the ending. We don’t actually get a clear wrap-up with the fate of the criminal. I won’t spoil the identity (we find out long before the non-Holmes characters do), but I will say that the film ends with that person running off onto the moor. We’re told that the only options are into the arms of the police or across the Grimpen Mire. In the book, the guilty party choose the mire and drowns in it. Here…Holmes declares arrest or death and goes to bed.

Regardless, I enjoyed this a great deal. I expected to like it (good cast, great story), and it delivered. Had this been released one year previous, it would be better remembered; it had the bad luck to be released in one of the best film years in history.

Why to watch The Hound of the Baskervilles (1939): A classic Sherlock Holmes story.
Why not to watch: It just…ends.

Email ThisBlogThis!Share to TwitterShare to FacebookShare to Pinterest
Labels: drama, horror, Sidney Lanfield, The Hound of the Baskervilles