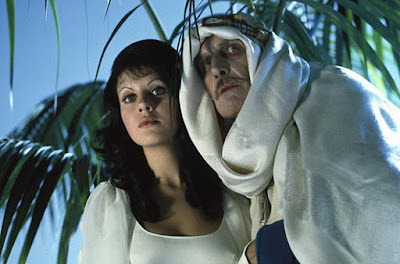 I enjoyed The Abominable Dr. Phibes when I watched it. It was strange, but it was right in the wheelhouse of Vincent Price. Our anti-hero, Phibes (Price) was horribly disfigured in a car accident on his way to the hospital where his wife has died on the operating table. Blaming the doctors for his accident and his wife’s death, Phibes takes his revenge on them with bizarre death traps. I didn’t expect or even want a sequel, and yet here we are with Dr. Phibes Rises Again. Phibes is the same, but pretty much nothing else is. This movie is tonally different from the first and goes in directions that the first never really hints at.

At the end of the first movie, Phibes has enacted his revenge, and he joins his wife in a sarcophagus and replaces his blood with embalming fluid. So, naturally, we’re going to reverse that process for this movie. Phibes (still played by Vincent Price), well, rises again. And suddenly Phibes is an expert on an ancient Egyptian burial site and a magical river that gives and restores life to people. His plan is to take the body of his wife Victoria (Caroline Munro) to this place at the right moment in time for her to be resurrected and the two of them to be granted something akin to immortality.

But we have to have a foil in this, right? And the foil is going to be a man named Darius Biederbeck (Robert Quarry), who is centuries old thanks to an elixir that he drinks and is running out of. Biederbeck wants to get to Egypt as well at the right time to maintain his own life. So naturally, when Phibes arises from his tomb, he discovers that his house has been destroyed and the mystical papyrus that holds all of the information he needs once in Egypt is gone. Biederbeck, of course, has taken it. Mind you, none of this is hinted at in the first film.

What we get, then, is a race between Biderbeck and his crew and Phibes, accompanied by the body of his dead wife and by his assistant, Vulnavia (Valli Kemp). How do we know her name is Vulnavia? Because Phibes will say it constantly. He tells her everything they are doing as a way to give the audience exposition. He talks about his plans. He compliments the way that she has cooked the local fish.

Dr. Phibes Rises Again is a completely ridiculous movie in every aspect. While the Phibes character, his dead wife, and Vulnavia are connections to the first movie (even though Vulnavia is played by a different actor in this one), nothing else is. Suddenly we’re supposed to believe that this guy who was an organist is somehow also got the anthropological chops to know about a secret Egyptian immortality ritual that is 2000 years old? And that he’s got a papyrus to make himself immortal and bring his wife back to life? Where the hell did that come from?

It’s as if the filmmakers, or at least the studio, was so desperate for another Dr. Phibes movie that they resurrected him for the first thing they could think of. Imagine watching a movie like, say, The Silence of the Lambs and then, when they make a sequel, they decide to make Hannibal Lecter not just a cannibal psychiatrist, but also an expert in HVAC or plumbing because that’s the path the plot is going to take. For a film that already requires a tremendous amount of willing suspension of disbelief, this is asking far too much of all of us.

It’s also absolutely desperate to be as gothic as it possibly can. Phibes as a character is ridiculously florid. He walks around in outfits that I’m not sure I have the words to describe, but are sort of like what a 19th century drag queen might wear. Since we learn in the first movie that Phibes lost his ability to speak in the accident, Price essentially plays the role in pantomime, using a invention he created to “speak.” Essentially, he’s just doing a voiceover that is about 90% exposition.

But so much of this simply beggars the imagination. At one point, Biederbeck, trying to gain access to the mystical underground river of life, steals Victoria’s body to force Phibes’s hand. Phibes, expositing as always, tells us (and the missing body) how time is short and he needs to recover her…but he’s playing the organ instead of actually doing things to recover his wife.

I enjoyed The Abominable Dr. Phibes because it was campy and weird and goofy and fun. Dr. Phibes Rises Again, in trying to up the ante in every way it could, instead veers off in ridiculous directions. What could have been more campy joy with bizarre murders is instead a cobbled together mishmash of ideas that just don’t work.

Why to watch Dr. Phibes Rises Again: Because you should experience the campiest thing you’ve ever seen.
Why not to watch: There’s camp and then there’s this.