Glows in the Dark 'Cause He's Iridescent 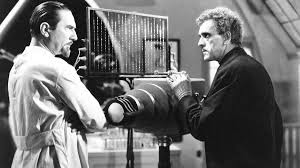 There’s something wonderful about old school horror movies. They aren’t really that scary any more in any real way, but there’s a particular feel to them and style about them that is like nothing else. The Invisible Ray from 1936 is one of those from that era that mixes special effects that look cheap by today’s standards, science that makes absolutely no sense, and overacting typical of the age and genre. It also features Boris Karloff being a bad guy and a rare turn for Bela Lugosi as a selfless hero.

Unorthodox scientist Janos Rukh (Karloff) calls a group of scientists together to witness a new experiment in his house. Rukh has invented a telescope that can collect unique rays from what he calls the Andromeda Nebula that can reveal past events on the Earth. Essentially, this ray allows Rukh to “travel” back in time in the sense that he can move to a distant place and view the earth—and because he is light years away, he is seeing past events. He can also project these events. He does so, and the event he shows everyone is a meteor laden with an unknown element crashing into southern Africa.

The scientists are impressed, and ask Rukh and his wife Diana (Frances Drake) to join them on an expedition to (colonialism alert) Africa. Not a specific country in Africa because we’re in a time where all of Africa is a jungle and completely uncivilized. Anyway, those going along on the trip are Sir Francis and Lady Arabella Stevens (Walter Kingsford and Beulah Bondi), Lady Arabella’s nephew Ronald Drake (Frank Lawton), and esteemed scientist Dr. Felix Benet (Bela Lugosi).

So off they go, and several things happen. One is that Rukh finds his meteorite, and it is filled with the powerful element dubbed “radium X.” Rukh is poisoned by it, though, and now glows in the dark (a fun effect for the time) and kills anyone he touches. Dr. Benet comes up with a temporary cure that can make him safe for a time. Also, Diana Rukh and Ronald Drake make eyes at each other, frustrated by her marriage.

Eventually, everyone goes back to Europe. Rukh cures his mother (Violet Kemble Cooper) of blindness only to discover that Benet is doing the same thing in Paris. Benet has gotten most of the acclaim from the miracle cures created by radium X, and Rukh, still suffering, goes to confront him. The problem is that the radium X poisoning has started to affect his brain. Rukh fakes his own death (clearing the way for the marriage of Diana and Ronald), and then vows to eliminate the other people on that ill-fated safari.

There’s a lot to like here, and most of it is the performances of Lugosi and Karloff. Karloff, of course, was always good. He chews the scenery playing as a madman with the best of them, and here, he’s as good as he ever was. It’s Lugosi who is more interesting in a lot of ways, though. Lugosi’s career so frequently involved mad scientists and monsters. Seeing him play a genuinely noble character, someone selfless and principled and pulling it off really well is a great deal of fun. I’d have loved for him to have had more opportunities like this one in his career.

The special effects, of course, are terrible. The projected video of the meteor crashing into Earth is laughable even by 1936’s standards and looks like shadow puppets by today’s standards. I realize that’s an unfair comparison, but there are a lot of things that come across as cheap and a bit shoddy. We learn that Rukh can kill with a touch, for instance, and when we find the body of one of his victims, there is literally a perfect gigantic handprint on the victim’s neck, like the outline was painted on with phosphorescent paint and then filled in.

The single most ridiculous moment comes when Rukh starts his killing spree. Dr. Benet uses an “ultraviolet camera” to take a picture of the victim’s eyes. When he develops the film, he gets a perfect image of Rukh, almost as if he was framed on the dead person’s cornea.

The science is ridiculous as well. I’ve never really understood the idea that happens in many a movie like this one that a many can be so imbued with a deadly toxin that he can kill with a touch (he murders with a handshake at one point), but doesn’t himself subsequently die. It’s all so clearly made up and not based in anything like real science. Actually, it’s kind of endearing, because it reads very much like pulp science fiction of the time.

It’s hard not to like this film. Lugosi and Karloff are game to ham things up, and while there are important roles in the other people involved, they don’t really matter that much. I don’t even care that there’s no chemistry between Diana Rukh and Ronald Drake. The chemistry between Karloff and Lugosi is all we really need.

Why to watch The Invisible Ray: Bad guy Karloff, good guy Lugosi.
Why not to watch: It’s goofy as all hell.