Failed as a Species 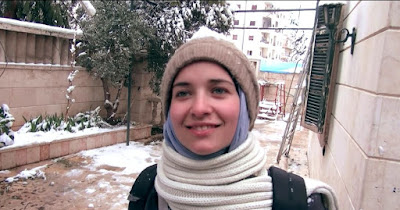 I honestly don’t know where to start with a film like For Sama. This was evidently a Frontline documentary shown on PBS stations. The film is essentially a compilation of five years of raw footage from the siege of Aleppo in Syria. I don’t really know the politics except to say that this is more or less the attempted genocide of the Kurdish people. The Syrian government, Hezbollah, and Russian military attacked civilians repeatedly, and the civilians held out for half a decade.

During this time, journalist Waad Al-Kateab went to school at Aleppo before the revolution began, became involved, met her husband Hamza, got pregnant, and gave birth to her daughter, Sama, who is named in the title of the film. The film is very much made for Sama, whose early life was spent in a hospital in the middle of a city being subjected to missile attacks and gunfire, while her mother filmed and her father operated what was eventually the only hospital in that part of the city.

For Sama pulls no punches. What we are seeing is not recreations of events, but the actual events unfolding. We see mothers entering the hospital to claim the bodies of their slain children. We see boys carrying in their dead brother killed in a missile attack, none of them older than 10. We see a child mourn the loss of his cousin, and when asked, telling the people around him that his dead cousin’s parents are themselves almost certainly dead. There is blood and it is real blood. This is real death we are seeing, and all of it is completely senseless.

I would say it is impossible not to be moved by this, but there is too much evidence in this world of people who are only concerned with what confronts them, and for whom their own minor inconvenience is far more tragic than the senseless deaths of thousands of others. But I found it impossible to be unmoved. There is, of course, the senseless tragedy of the war, of seeing buildings vanish in a cloud of dust and then be revealed as rubble. It is difficult to watch children die, to see doctors futilely searching for a pulse that no longer exists. And at the same time, it is impossible not to be moved and inspired by the actions of Hamza Al-Kateab and others doing their best to keep people alive, and to stand up for what they don’t simply believe but know is right. There is a courage on display here that we would all like to claim we possess and, bluntly, generally don’t.

For Sama is the kind of film we should force our Congress and our president (at least any president who isn’t a malignant narcissist) to watch, perhaps more than once, to see exactly what the consequences of military actions really are. We should force them to look at the bodies of children killed needlessly, and to hear the words of a woman who is desperate for the life of her own child, but who also feels that the need for her to remain in place and to help whenever and wherever she can is greater.

And that’s the real question here. At one point, Waad, Hamza, and Sama visit family in Turkey. They have managed to get out of Aleppo and even out of Syria. And they go back. I understand them going back. Hamza is a doctor and feels it necessary to help where he can. Waad is a journalist and is documenting the struggle. But they take Sama back with them, and it’s the one thing I’m not sure I understand. A part of me does—being separated from a child of a year or two would be terrible, especially when you don’t know your own fate. But, at the same time, they seem to be taking their child into danger and privation needlessly. I don’t know exactly how I feel or should feel about this.

My reaction to For Sama is difficult to put into words. On the one hand, people like Hamza Al-Kateab, Waad Al-Kateab, and their many friends (a significant number of whom do not leave Aleppo alive) are representative of the best of humanity. We are often truly at our best when things are at their worst. And on the other hand, since it seems to always be the worst of us who make the decisions and rule over us, For Sama is clear and unequivocal proof that we are a failed species that should probably go extinct.

Why to watch For Sama: Because you need to see both the best and worst of humanity.
Why not to watch: We are a failed species.