Five for the Price of One

Film: Tales from the Crypt
Format: Streaming video from Tubi TV on the new internet machine. 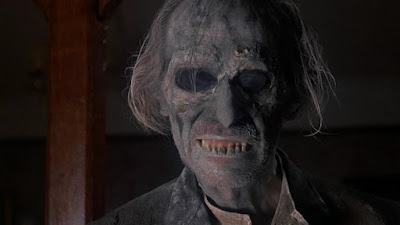 I ride a number of hobby horses on this blog—Tarantino is overrated, “coming of age” stories for girls are always about inappropriate sex—but one that seems to come back over and over all the time is the value (or lack thereof) of horror anthologies. Anthologies are always iffy because the quality is rarely consistent. That said, older anthologies tend to be better in general. That being the case, I had some hope going in to Tales from the Crypt from 1972. That it includes Peter Cushing and Ralph Richardson among others made me hopeful as well.

And, well, it’s not bad. Tales from the Crypt naturally has a framing story and then has five short tales all taken from the pages of EC Comics titles like “The Haunt of Fear” and, well, “Tales from the Crypt.” A group of five people show up for a tour of some catacombs where they are confronted by a robed man (Ralph Richardson), who is our Crypt Keeper. He then shows each of them a tale of dire warning about some terrible misdeed they are planning to commit. Well, kind of. We’ll get to that in a second.

Our first story features Joan Collins(!) killing her husband on Christmas Eve. Trying to hide the body, she learns that a killer has escaped from a nearby asylum and might be prowling the area dressed as Santa Claus. If only her daughter wasn’t so desperate to see good ol’ St. Nick and let him in the house…

Next, a man (Ian Hendry) abandons his family for his mistress. As they make their getaway, they get into a terrible accident. Soon afterwards, he finds that everyone who sees him is terribly repulsed by his appearance, even terrified of him. The click-bait reason will shock you!

The third story concerns the sort of cruel morality tale that these comics were best known for. A young man (Robin Phillips) and his father (David Markham) live near an elderly gentleman (Peter Cushing) who is a garbage collector and who is a friend to the local children. Deciding that they don’t like him, the father and son team slowly destroy his life until he (naturally) comes up with a way to get his revenge from beyond the grave.

The fourth story is one I’m going to go into detail on in just a moment. For now, suffice it to say that it’s a version of The Monkey’s Paw, and at least it has the sense to overtly reference that story. It’s also the one tale that makes this movie problematic.

The fifth and final story concerns a man (Nigel Patrick) who has become the new director of a home for the blind. Figuring that this is a good way to make himself rich, he starts skimping on their food and the heat, enriching himself. Eventually, the blind occupants of the home figure out a way to get their revenge. This one has a few problems as well.

So let’s talk about these last two stories. The problem with the last story is that our bad guy is eventually set upon by his own dog, who has been starved by the blind men. The idea, of course, is that the dog will be hungry enough to attack his former owner (if you watched Game of Thrones, think Ramsay Bolton). The problem is that they starve the dog for two days. Two days. I’ve got two dogs right now, and I have to tell you it would take longer than two days for my dogs to think that eating me is a good idea. So, while the story is an interesting one in a lot of respects and has some great ideas, it really fails in that capacity.

But it’s the fourth story that genuinely spoils the movie for me. All four of the other stories show people who are needlessly cruel, vicious, murderous, mean-spirited, or in some other way deserving of the fate that befalls them. That’s absolutely not the case, or at least not made explicit in the fourth tale. The man that we are supposed to think is deserving of this terrible fate in the story is just a guy who lost a lot of money. In fact, it’s his wife who screws things up with her greed, not him, but he’s the one who ends up punished.

Honestly, it’s a problem. EC Comics tended to be little morality tales where people had terrible fates happen to them because they in some way deserved those fates. That poor guy gets screwed over, and it’s not even his fault.

Still, Tales from the Crypt isn’t bad. It’s not great, either. It’s entertaining and not very gory, although there are a couple of scenes with some blood. A couple of different story picks, or perhaps a little more length for a few of the earlier stories, and it probably ends up being a little better than just an okay time-waster.

Why to watch Tales from the Crypt: A great cast, and some good stories.
Why not to watch: Like most anthologies, it’s up and down.

Email ThisBlogThis!Share to TwitterShare to FacebookShare to Pinterest
Labels: Freddie Francis, horror, Tales from the Crypt