Not Another Insane Asylum Movie 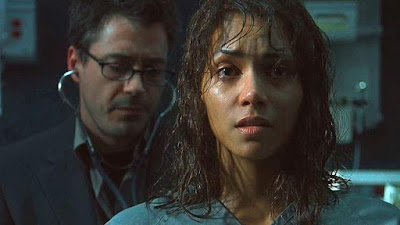 Movies like Gothika make me so angry. I like the bulk of this cast and the plot has a lot of elements that should be right in my wheelhouse, but very little about this movie actually works. This is a surprisingly dumb movie in almost every aspect. There are some good scares and some decent moments here and there, but overall, this is a movie that decides to skate far past the line on implausibility. And, much to the film’s detriment, I’m not talking about the supernatural stuff. I’m willing to buy into ghosts and possession for the length of the running time. No, the problems with Gothika are everything else.

Psychiatrist Miranda Grey (Halle Berry) works in a mental hospital run by her husband, Doug (Charles Dutton). One rainy night, Miranda is driving home and drives off the road when she is startled by a young woman (Kathleen Mackey) in the middle of the road. Miranda has an unexplainable event happen when she approaches the woman. Three days later, she wakes up in a cell in her own asylum under the care of former colleague Pete Graham (Robert Downey Jr.). She discovers that her husband has been brutally murdered and that she is absolutely the prime and only suspect. Got that? Good—if you don’t want Gothika spoiled, stop here. The rest of this review should be considered under a spoiler tag. To really address just how much this movie is a problem, I need to dive into the full range of garbage.

I’m not going to go through the ins and outs of this in terms of a blow-by-blow breakdown of the entire plot. What we are privy to as the audience is that Miranda is clearly being haunted/possessed by the woman from the bridge at the start of the movie. What we also find out is that the woman in question was the daughter of hospital director Phil Parsons (Bernard Hill), who allegedly committed suicide four years earlier. And eventually, we’re going to find out that Miranda’s murdered husband was actually a serial killer, who captured and tortured young women sexually before killing them. Like I said, consider all of this under a spoiler tag.

Going along with all of this is one of Miranda’s former patients, Chloe (Penelope Cruz), who claims that the devil comes to rape her regularly in her cell. Of course, Miranda is going to find out that this is the case, and she’s going to catch a glimpse of a particular tattoo. Yes, I’m going to spoil this—it turns out that her husband was a tag-team serial killer. His partner is his best friend, the local sheriff (John Carroll Lynch), who has that elaborate tattoo across his chest.

Of course it’s all going to work out at the end. The ghost will get her revenge and everyone who doesn’t belong in the institution will get out. This includes Chloe, who murdered her step-father and thinks she is being raped by Satan.

So let’s see the things that have to be true in the world of Gothika for all of this to work:

1) Miranda Grey, who has worked at this asylum for at least long enough to know everyone there well enough, is unaware that the hospital director had a daughter who committed suicide. This is entirely news to her despite their being close and personal friends.
2) She has to be completely unaware of her husband’s best friend’s gigantic tattoo despite the fact that she has been married for some time and that the two have been friends their entire life.
3) Despite overwhelming evidence of her guilt, Miranda is going to be let out of the asylum and not charged with anything. Evidently, “I was possessed by an angry ghost who made me kill my husband with an axe” is a legitimate defense in Connecticut.
4) Serial killers will leave victims alive in the place where they torture them because, despite the fact that it’s not on the radar of anyone, they don’t want to panic. However, they will attempt to kill people in their custody.

Gothika is dumb. Everyone in the film is dumb. The plot functions not because it works logically but because a specific path through the story is desired. And because of that, short cuts are taken and characters act for plot reasons and don’t know things for plot reasons rather than sending this thing back to rewrites.

There are some good moments, a few decent scares, but no one should wade through something this dumb to find them.

Why to watch Gothika: Good cast in general.
Why not to watch: It’s aggressively dumb.