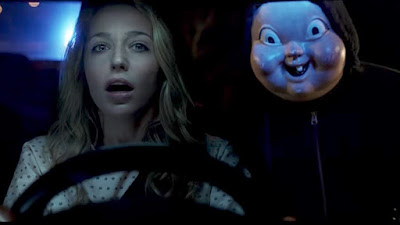 If someone tells you that you should watch Happy Death Day, there is almost a guarantee they will tell you it is a combination of Groundhog Day and Scream. It’s close to an apt comparison. There’s a great deal of Groundhog Day in this movie, and it is also a slasher, but it doesn’t have anything close to the wit that makes Scream as good as it is. This should not be seen as a knock against this movie. To be honest, most horror movies and movies in general don’t have the wit of Scream.

The elevator pitch of Happy Death Day is that Teresa “Tree” Gelbman (Jessica Rothe) is murdered on her birthday by a mask-wearing killer. Every morning, she wakes up in the dorm room of Carter Davis (Israel Broussard) to live the day out again until she is killed. While the morning and afternoon seems to be the same every day, Tree tries out something different every night, but still ends up dead. When she confesses this to Carter (who forgets every morning, of course), he recommends, since she remembers the previous days, that she attempt to figure out who the killer is. And so, she does.

Happy Death Day does a great deal correct. One thing that seems to start out the wrong way is that just about everyone in the film with the exception of Carter is pretty unpleasant. A part of the middle of the film is Tree realizing that she isn’t really a very good person, and then realizing that even though she is living through the same terrible day over and over, she has the ability to improve herself. It’s a clear lesson learned from Groundhog Day, and for a movie with this basic plot idea, it’s a smart way to give Happy Death Day a little bit of purpose beyond the murder mystery.

But is there too much of that? There might be. There is a moment in the film that feels like it is very much trying to ape the last repeated day of Groundhog Day. In that movie, Bill Murray’s Phil tries to solve all of the problems of the day that he has lived through. Tree has a similar day, albeit with a great deal less detail, but it does feel like a significant nod to Murray’s film. It’s done well, although the outing of another student (to himself!) does seem to defy good taste. There’s another of these when she convinces Carter that she really is living through the same day that parallels the scene in the diner in Groundhog Day.

Tree really is an unpleasant person for much of the film. She ignores her father’s attempt to talk to her on her birthday. We discover eventually that she shared a birthday with her late mother, and while she is undoubtedly going through some issues dealing with her mother’s death, she clearly ignores that her father is going through something similar. She is mean to other people on campus, dismissive, and is (cliché alert) having an affair with a married teacher, because of course she is. I said earlier that Carter is the only really decent person in the film, and the only reason we are given to think that is that he gave Tree his bed and didn’t take advantage of her drunkenness—literally the lowest bar to clear for human decency.

I love the mask of the killer. For whatever reason, the college that Tree and everyone else goes to has a kewpie doll-like baby as its mascot. It’s a really stupid college mascot, of course, but it’s a great mask. It’s scary and unnerving specifically because it is so strange and goofy.

Happy Death Day’s biggest issue is its rating. I get the goal here was to make this an accessible movie for as many people as possible, but a PG-13 slasher is a hell of a hard sell. It’s almost entirely bloodless, and while that doesn’t mean it doesn’t have a couple of decent scares in it, it does mean that it’s very toned down. Maybe that’s a good thing in the sense that it can bring in new fans to the genre who might otherwise be turned off by buckets of blood and knife slashes. But it does mean that this is a tougher sell for a more jaded horror audience.

Truthfully, though, I enjoyed this more than I thought I would based on the premise. The cast is good throughout, even if a lot of them are doing the same thing over and over, living through the same day without knowing it as they interact with Tree. It got a lot of the right lessons from Groundhog Day, but it does seem to have spent far too much time copying off the same notes.