Closer than a Close-Up 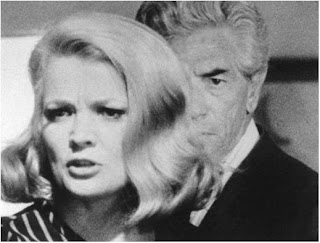 There are few directors in cinematic history who could get the sort of honest portrayal of real life the way John Cassavetes could. There are few films that demonstrate this particular skill as well as Faces. Faces is a film about infidelity, about loneliness, about looking for a way to fill the emptiness of life. Specifically, that emptiness here is being filled up with new relationships, sex, and worthless pleasure.

Cassavetes’s other talent is depicting dialogue that comes across tonally as being truly reflective of real dialogue, a skill only matched in recent years by Tarantino. The people in Cassavetes’s films talk like real people. They swing from happy to angry, aggressive to passive, laughing uproariously to devastated because of a wrong statement or a word that doesn’t strike the correct tone. A lot of this happens, at least in this film, because the characters are constantly fueled by lakes of booze. There’s a lot of laughter in this film, and it really comes across as genuine. Interestingly, and tellingly for this film, a great deal of this laughter is not only honest in appearance, and seems to be hiding something deeper and uglier.

Our main character is Richard Forst (John Morley), who has a loveless marriage with Maria (Lynn Carlin). He looks for happiness with Jeannie (Gena Rowlands), a young and attractive woman who may or may not be a prostitute, or at least something quite a bit like one. Maria has her own affairs with Chet (Seymour Cassel). Forst eventually leaves Maria and shows up at Jeannie’s place, where his relationship with her seems to mimic his marriage in many ways.

The central conceit here is that no one is really happy, no one really loves or cares about anyone else, no one has what he or she wants. There is a tremendous undercurrent of dissatisfaction in every conversation and on every face at all times. No matter the person, the person’s importance to the plot, or the length of time on screen, there is a terrible (in the original sense of the word) sense of wanting more and not quite knowing what is desired. Instead, there is a sense of desperation, of desire so strong that something must be done, but with no sense of what to do.

Faces was shot in high-contrast black and white, which has several effects on the film. The first is that there is a graininess that gives the film a particular grittiness. In essence, the film looks amateur, and because of this, it gives the impression of far less artifice and a deeper sense of reality. Second, the high contrast puts the faces in stark relief. Every flaw is exposed and real, which further adds to the overall sense reality.

So, while this film is fiction, a story, there is a sense here of documentary filmmaking, that this is a slice of someone’s reality. Certainly, there are any number of people who could have connected with this film on that level when it was made, and could connect with it now—laughing continuously so that there is no crying, finding no real enjoyment in anything but trying to fill up the gap in their lives with anything they can find, really enjoying nothing but telling themselves that they enjoy everything, except for those moments when they can no longer hide their inner pain, and every attempt to look for happiness ends up tawdry, failed, and laden with guilt feelings.

With a film like this, one that truly attempts to depict life rather than reflect a part of it, two questions become important: is it any good, and (in this case) do I like it. Faces is unquestionably great, something truly staggering in the way it is created, the way it looks, and its real attempt to show the tawdriness and crushing despair of daily life. Cassavetes has created a true work of art with this film, revealing and excising something painful beneath the skin of society.

Do I like it? On this score, I’m not as sure. This is not a terribly easy film to watch. There’s a lot of pain here, even when everyone is smiling and looks like he or she is having a great time. Everything is painful here—love, sex, friendship, conversation. Emotional and spiritual pain becomes an environment in this film, and while people try to escape from it for a few moments if they can, no one is ever really able to.

Ultimately, the question of whether or not I like this film becomes one of how much time I really want to spend being shown that life is a series of disappointments and unfulfilling experiences that essentially mean nothing in the grand scheme. I respect it, I appreciate it, I’m glad I watched it. I think that maybe that’s going to have to be enough for this one.

The last question regarding this film is the name. Of all the things that Cassavetes could have called this film, why Faces? If I had to make a guess (and I suppose, in a way, I do), I’d say that he called it this because a great deal of the film focuses on the faces of the characters. Much of the film is told in close up of one character or a pair.

Why to watch Faces: Cassavetes gets so close to reality that it’s uncomfortable.
Why not to watch: How much more reality do you really need?
Posted by SJHoneywell at 1:44 AM