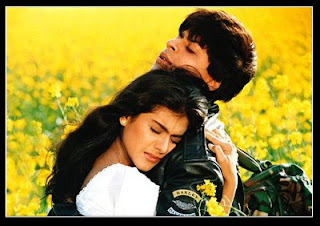 When I was a kid, Star Wars played at the second-run theater in my town the entire next summer. It lasted in the first-run theaters for months; it seemed like it would never go away. Star Wars was nothing compared with Diwale Dulhaniya le Jayenge (The Brave-Hearted Will Take the Bride). Originally released in 1995, this film played at a theater in Mumbai well into 2007—more than 600 weeks. This would be like finding The Matrix still playing at your local multiplex. To put it another way, it opened during Bill Clinton's first term in office and closed during George W. Bush's second term.

This does seem pretty amazing, especially for a movie that, really has a plot that’s been around since before there were movies. You’ve seen this film before, at least in terms of the plot. Boy meets girl, girl hates boy, girl is promised to another, girl falls for boy, boy goes to steal girl away. Multiply this by three hours, have everyone speak Hindi, and throw in some huge musical numbers, and you’ve got this film.

So let’s look at this version of this time-worn tale. Starting in London, we have a young, working class girl named Simran (Kajol), who is longing to meet the man of her dreams, a man who she has not seen yet. She sings about this at length and with great passion to her mother (Farida Jalal). You should expect the singing. You should also get really used to this tune, because you’re going to hear it. A lot.

We’re also introduced to Raj (Shahrukh Khan), a wealthy young wastrel who has followed the family tradition of failing out of school. He convinces his father that he’d like to take a vacation in Europe. Coincidentally, Simran convinces her father, Baldev, of the same thing. She has just been promised in marriage to the son of his childhood friend back in Punjab. Incidentally, Simran’s father is played by Amrish Puri, best known to American audiences as that dastardly heart-ripping-out bald guy in the second Indiana Jones movie. Simran wants a month of life before she is married off to a man she’s never met in a country she’s never seen.

It’s important also that Raj and Simran’s father have met. Raj happened to scam some beer off Baldev at his store. This will become of critical importance later.

We get a meet cute on the Eurorail train as Raj and his friends and Simran and her friends leave for Paris. Both of them are running late, and he jumps on the train, then pulls her aboard. He pretends that the two of them are locked in their train car, and he flirts shamelessly with her. Eventually, the two reunite with their respective friends, and the two groups meet up with each other in Paris. When the groups leave for Zurich, Raj causes Simran to miss the train, and they wind up traveling together for a bit.

What happens should surprise no one. He annoys her, teases her, but also comes to care deeply about her. She is annoyed by him, aggravated, and eventually comes to find him desperately attractive. The truth is that for the first hour of the film, Raj is a complete dick. He does soften up a bit a few times, and eventually, the two start to gently fall for each other. There’s a nice scene in a church in which Simran prays for something, but won’t tell what it was. Raj returns to the church and prays for her to get what she wants, showing that under the bluster and flirting, he’s actually a decent guy.

Eventually, the Europe trip has to end, though, and the two return home. Simran admits to her mother that she has found the man she really wants to marry. Sadly, her father overhears this and packs the family off to Punjab so the promised marriage can take place. Raj, naturally follows her, promising her that he will not elope with her, but will win her—and her father—honestly. This is made more difficult by the fact that Baldev remembers the beer prank, and has also made a promise. It’s further complicated by Raj’s father (Anupam Kher) promising him to Simran’s fiancé’s sister. And, naturally, her proposed husband, Kuljit (Parmeet Sethi) is a swine (think Gaston from Beauty and the Beast).

I won’t spoil the ending. It’s probably different than you might expect, but not very different.

I am, I admit, somewhat flummoxed by this film. While it was released in 1995, for all the world it looks like it was made in 1985. Raj is straight out of a Bollywood version of an early John Cusack movie. He also has a near constant giggle that I find grating. It comes out virtually every time he speaks, not too much different from an American kid who says “like” every third word. At some point, I wanted to plug up my own ears.

Simran is ridiculously romantic as well. Everything must be the way she wants it—she’s high maintenance in a way that I wouldn’t stand for. She cannot wear Kuljit’s ring, she must have Raj be the one who breaks her fast…or everything is ruined! Ruined! This is a character archetype I don’t really understand. Well, I do understand it; I just don’t understand why someone would want to make the sympathetic character like this.

Despite this, there is a particular charm to this film. I love the fact that the characters speak in rapid-fire Hindi mixed with English throughout. Conversations go “bunchawordsIcan’tunderstand…Okay? Thank you very much! BunchaotherwordsIcan’tunderstand.” It’s actually quite charming. Raj’s father is a treat, too. Upon meeting Simran for the first time, he kisses her forehead, blesses her, then looks at Raj and shouts, “Excellent! Fantastic! Done!” Even his red beret and goofy ‘80s-style jacket make me like the guy.

I’m perhaps not the best judge of Bollywood films in general. I haven’t seen many of them. The numbers are a lot of fun. Simran’s voice (I don’t know if it’s really the actress or not) is high-pitched and chipmunk-y, though, and there are times when it really made me cringe. If I’m going to watch an epic-length Bollywood bonanza, my choice (limited though my experience is) is Lagaan.

As a final note, there’s a reason why I tend to use the foreign title for these reviews. This film is listed under half a dozen or so English names. It’s like a choose-your-own-adventure title. The Brave-Hearted/Bold/Lover Will Take/Carry the Bride/Woman. Yoikes!

Why to watch Diwale Dulhaniya le Jeyenge: Pageantry.
Why not to watch: You’ve seen this movie a dozen dozen times.
Posted by SJHoneywell at 9:45 PM