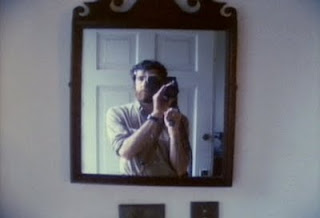 What happens when you’re prepared to make something great and your world crumbles around you? This is what happened to Ross McElwee, and the result was Sherman’s March. It’s impossible to call this a strange little film, since it clocks in at just over 150 minutes, but strange it is. It’s the Seinfeld of documentaries—essentially about nothing more than McElwee’s life during the mid-1980s. He discusses relationships, nuclear war, dreams, women, and sometimes William Tecumseh Sherman’s march to the ocean and the burning of Atlanta.

And that’s really it. In reality, the film is a rambling collection of McElwee’s musings, his dreams about nuclear war, his witnessing a nuclear test on the eve of his 13th birthday, and a series of women who wander into his life, and just as frequently wander out of his life again, leaving him alone. McElwee seems to want simple human connection, but also seems to want to be alone and actually make the film he intended. He’s a man of contradictions.

He continues through the film to touch back on Sherman, mentioning how misunderstood the man was—he was reviled in the South for his march to the sea, hated in the North for being too soft with his surrender terms, and generally unloved wherever he went for years after the war. It’s impossible not to draw the metaphor here that McElwee is making between himself and Sherman. The women he involves himself with, or is forced into involvement with by others, are involved with other men, have dreams of their own, or simply aren’t suited to him.

It’s impossible not to sympathize with him at some point. His plight is a pretty common one, after all. At the time of the filming, McElwee was in his late 30s and still unmarried, a situation that certainly raises eyebrows in the conservative South of the time (and presumably still today).

And the women…there’s a definite reason that some of them were available. One is attempting to be an actress, and is obsessed with Burt Reynolds (who does make a sort of appearance in the film at one point), wanting nothing more than to be a part of that world. Another, a friend of his sister, is a borderline survivalist convinced of Christ’s imminent return. Another, a linguist, leaves McElwee for someone else simply because he was available and didn’t need to leave her hippie lifestyle to earn a living. Another is a confirmed Mormon, and will not marry outside of her religion. Another is pursuing a recording contract in New York. Another is obsessed with an old boyfriend, and hooks up with him again while McElwee is visiting her. In each case, he willingly allows himself to consider that “this might be the one.”

I mentioned above that this is like a Seinfeld episode, and that’s as good of a metaphor as I can develop for it. McElwee’s camera films whatever is in front of him at the moment, his current female target of potential affection, and sometimes, if he happens to be in the area, a piece of ground that is at least somewhat relevant to Sherman’s March. Mostly, it ends up being about his own desperation, evidenced by his frank narration of both his situations and his feelings.

There are some truly remarkable people in this documentary about nothing. The survivalist strike me as some of the strangest, particularly when they spend an afternoon sitting on their front porches firing at sticks of dynamite. There’s some boosterism for the South as well, with one woman evidently convinced that many of the slaves were such because they chose to be.

While not a difficult film to watch, I’m not sure of my reaction to it. It’s certainly gutsy, if for no other reason than McElwee’s willingness to expose himself at this level and to this extent for a film audience. I learned very little that is of any use to me, although I imagine that there are some life lessons tucked within that will strike me in the coming days. Ultimately, Sherman’s March is a difficult film to judge, and that’s going to have to be good enough here. If you press me, though, I’ll say that it’s worth seeing.

Why to watch Sherman’s March: Because honesty like this is rare and precious.
Why not to watch: It’s got cinematic ADHD.
Posted by SJHoneywell at 1:04 AM