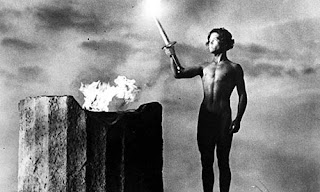 First, a note: Both “The Book” and IMDB list the English title of the first part of Leni Riefenstahl’s documentary on the 1936 Olympics as “Festival of the Nations.” However, anyone with even a smattering of German will tell you that “Volker” translates as “folk,” or “people.” Thus, I’m going with the translation here that makes sense to me, which also happens to be the title given on the copy sitting next to me at the moment.

Admiring Leni Riefenstahl’s documentary duo Olympia 1: Teil—Fest der Volker, and Olympia 2: Teil—Fest der Schonheit (The Olympiad Part 1: Festival of the People and The Olympiad Part 2: Festival of Beauty, hereafter referred to as Olympia 1 and Olympia 2, and jointly as Olympia) is sort of like admiring the poetry of Ezra Pound. Ezra Pound—great poet, Nazi sympathizer. Leni Riefenstahl—groundbreaking filmmaker, essential component of Nazi propaganda machine. It can certainly be argued (and successfully, I think) that Riefenstahl did not support the Nazi racial ideology, but it can just as easily be argued that films like Olympia did a great deal to enhance the National Socialist agenda in the late 1930s. In a way, it feels like saying, “Y’know, Joe Stalin didn’t have much of a record as a humanitarian, but boy! What a dancer!”

This advancement of Nazi belief occurs only at the beginning and end of each part of the documentary. The opening of both films is decidedly Aryan, with blonde youth cavorting in various sports, often nude. In the first film, we see the torch coming from Greece to Berlin, with scenes of the torch being passed overlaid on a map of Europe as the torch makes it to the stadium. We also get a glimpse of the opening ceremonies, and how strange and fascinating it is to see (for instance) French and Canadian athletes marching into the stadium giving the Nazi salute.

With both films, though, we move into the sports, and the coverage is surprisingly even-handed. We see, for instance, many events in which athletes from countries other than Germany win. Additionally, we often see the medal ceremonies and hear long stretches of national anthems other than “Deutschland Uber Alles.” Jesse Owens gets star treatment here, as he richly deserved. It’s noteworthy, though, because as a non-Caucasian, Owens is unquestionably “untermensch,” and not a part of Aryan ideology. Still, Riefenstahl depicts him as an athletic deity, which goes a long way in suggesting that her own racial politics were different from that of her bosses.

The first film deals almost entirely with track and field events, and we get them in ridiculous detail. We see people long jumping for huge stretches, throw after throw in the javelin and discus, and leap after leap in the pole vault. There’s some track and field in the second film, but it branches out into boating, rowing, cycling, field hockey, and other events that don’t center on the main stadium in Berlin. Again, the treatment is decidedly even-handed. We’re given a detailed account of the field hockey finals in which India destroyed Germany by a score of 8-1, hardly a victory for Aryan pride. Boxing, strangely enough, is missing entirely.

This is all worth noting, because Riefenstahl could have easily made this an Aryan-only film. Germany actually won the medal count in the 1936 Olympic Games with 89 total medals, several dozen more than the U.S., which finished second with a total of 56 medals.

Riefenstahl chooses to show the results of some events and not others. For instance, we see a great deal of men’s gymnastics, but get no commentary on the events, and hear the names of no winners. Other events that today have a much lower profile, like the Pentathlon, are given a full treatment here.

One of the most interesting things to see here is the differences in the various sports from then and now. Gymnastics evidently took place in the center of the main stadium outdoors. The high jump is particularly interesting since this Olympics took place years before the advent of Dick Fosbury and the “Fosbury Flop.” Some of the numbers feel low as well—the pole vault, for instance, was won with a jump of about 14.5 feet, which wouldn’t even qualify today.

The main reason that Olympia is worth watching at all is because of the revolutionary camera work. Riefenstahl manages to get camera angles that almost had to be intrusive in the events. There are shots directly under the high bars in jumping events, shots that feel so close to the athletes that I have trouble believing they didn’t affect performances. She manages to show the human body in action from virtually every possible angle, and in spite of any apparent ideological desires from her Nazi overlords, gives this treatment to people of all nationalities and colors.

The goal, essentially, appears to be the depiction of the human body as a work of art or a thing of beauty. She succeeds. Much of what we are shown is in crisply-filmed slow motion, allowing for a real study of the bodies in motion. And, since the bodies are in general those of highly trained and exquisitely fit athletes, there is a particular beauty to them, as well as a grace and sense of physical power.

If anything fails in the version of the film I watched (there are evidently three—German, English, and French), it’s the editing. In the second part, we see horse after horse in the steeplechase jump the same fence and into the same pond. We see dive after dive after dive off springboards, endless javelin tosses, and what feels like hours of guys jumping over bars. Women’s events are almost entirely ignored as well in favor of the men. Whether this is specific to her vision or demanded as a part of the commission she was given is unknown to me. It does leave a taste of “the job of women is to produce children for the 1,000-year Reich,” though.

Regardless of these issues, Olympia is the beginning of the sports documentary, and has influenced generations of filmmakers since it was first unveiled. It may feel like weak sauce in this day and age of continual and continuous sports coverage, but virtually every sports movie, most documentaries, and certainly everything ever produced by NFL Films owes Leni Riefenstahl a debt that cannot be fully repaid.

In other words, “Leni Riefenstahl’s politics might have been a little suspect, but boy! What a filmmaker!”

Why to watch Olympia: Revolutionary coverage of sports.
Why not to watch: How many horses do you want to see jump into the same puddle?
Posted by SJHoneywell at 7:23 PM