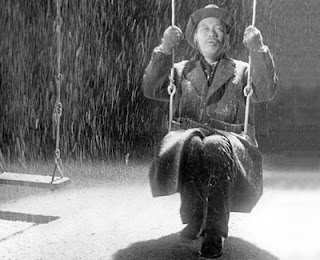 Say the name “Akira Kurosawa” to a film geek, and the one word response will be “samurai.” This is only natural, considering that Kurosawa’s most lauded and best-known and loved films all center around the fearsome Japanese warriors of old. His name brings up particular films instantly: Rashomon (story of a murdered samurai), Throne of Blood (samurai MacBeth), Ran (samurai King Lear), Yojimbo (samurai acting alone), and The Seven Samurai (self-explanatory).

Ikiru (To Live) is out of character, at least on the surface. It’s the opposite of a samurai film. Our protagonist, Kanji Watanabe (Takashi Shimura) is a low-level bureaucrat, a paper pusher whose greatest accomplishment in life is not missing a day of work in more than 30 years. He’s dead on the inside, enjoying no part of his life. He merely exists.

This is okay, even if it takes a little getting used to. It’s natural to expect samurai and battle sequences when Kurosawa is at the helm. Great directors, though, can work in multiple genres. Billy Wilder sure as hell did. So does Spielberg. Even Hitchcock and Kubrick tried comedy.

We also find out immediately that Watanabe is dying on the inside as well. He has a cancerous growth in his stomach that will kill him.

Watanabe misses his first day of work in nearly 30 years to go to the doctor and discover the root of his stomach troubles. While in the waiting room, another prospective patient tells him the doctor’s method. If he’s told he has a mild ulcer and should watch what he eats, it’s a death sentence. This other patient then goes through a laundry list of stomach cancer symptoms, and it is evident by the changing expression on Watanabe’s face that he has experienced these symptoms, and now realizes that his stomach problems are serious.

This causes an awakening in this man who has been emotionally dead for years. He removes a tidy sum of cash from his bank account, wishing to spend it, but realizing that he has no idea of how to enjoy himself. His cancer prevents him from being able to keep alcohol (or much food) down. He relates these problems to a drunken novelist in a bar, who decides to take the dying Watanabe out for a night on the town. They go, and the old man finally lives a little. He discovers women who will dance with him, pachinko parlors, and other joys of life.

It also becomes evident that his awareness of his illness has caused him to realize that his job is worthless and terrible. He says to a co-worker at one point that he has no memory of any specific thing he has ever done at work, only that he was always busy and always bored. This co-worker, a vibrant young woman, becomes an obsession for the old man, but not in a romantic way. What he desires of her is her life. He realizes, even as she leaves the civil service for a job making toys, that she is desperately alive, and he clings to her as a way to shore himself up, a bulwark against his own mortality. After some time, he finally confesses his illness to her—something he is unable to confess to his own son, who thinks instead that his father is spending his inheritance on a cheap floozy.

As a concurrent plot, a group of women in the area are trying to get a cesspool in one of the poorer sections of town removed and built into a park. However, the bureaucracy (which started here with Watanabe) runs them around over and over, essentially throwing them back to square one at every turn. Once Watanabe returns to his office in Public Affairs, he realizes that getting this park created could be the one thing he does in his life that has meaning—the one act of creativity and generosity that will define his life and give his existence meaning.

This is a fascinating film, albeit slow paced, almost dreamy. It takes nearly 90 minutes for Watanabe to realize that creating the park will be his legacy, and just as he does, the film jumps ahead five months to his wake. The last hour is mostly here, as his superiors take credit for the work Watanabe put in for the park and his co-workers and peers try to understand what happened in his last five months to drive him so desperately to make the little park a reality.

Many of the scenes, particularly those with his son and in the doctor’s office, are fascinating because of how they are filmed. In many a movie, these would be played for comedic effect—Watanabe is in fact told that he has a mild ulcer that will cure itself, and his reaction is as if he was told the truth. In a comedy, he’d really have a mild ulcer, and his reaction (based on what he was told by the other patient) would be darkly humorous. Here, it is deadly serious, because we as the audience have already been told that the cancer is real. Similarly, the misunderstanding with his son is tragic, but could just as easily be comic if spun ten degrees in one direction or another. That Kurosawa manages to hold these scenes as tragic speaks to his mastery of the camera and the language of cinema.

It comes as a shock when Watanabe dies with nearly an hour left in the movie, but the final scenes include frequent flashbacks as his co-workers and peers remember his last few months and the lengths he went to getting the park created. So, while the man is dead, in these last moments of the film, he lives on, which may well be the lesson of the film. However, it may not be, and thus we have a spoiler.

The three last scenes are arguably the most important. We see Watanabe’s last moments, sitting on a swing in his park in a snowstorm, singing to himself and calmly gliding back and forth on the swing. It’s a beautiful moment. He is completely content with himself. He’s gotten no praise for the park, no official recognition, and no official thanks. In fact, the deputy mayor has claimed the park as his own, almost didn’t invite Watanabe to the park opening, and did not mention the man in his speech. But Watanabe is happy. The park—his park—has been built.

His co-workers vow to act like Watanabe-san, but the next day in the office, they cave in, and go back to their typical grind. One man tries to rebel, but is quickly cowed by the others, and the men simply push papers along their desks, continuing to do nothing while remaining busy.

Finally, the last shot of the film is children playing, months hence, in the park that Watanabe created. There’s no feel-good of the park being named after him, no specific remembrance of the man, but there is something tangible that he left behind. And maybe that’s all that really matters, even if the name of Kanji Watanabe is no longer remembered.

Ultimately, it seems, no one knew the man the film was about, but we as the film audience do. Is Kanji Watanabe pitiful? Tragic? Sad? Perhaps yes to all three, but ultimately, he is also grand, heroic, and a man to emulate.

This is a remarkable film, and it makes me wish I’d looked at more of Kurosawa’s collection before I was this old. Every film of his I see makes me like him more and respect him more. Marvelous, sad, poignant, and powerful. Ikiru deserves to be on this list, and should be on a list one-tenth this long as well.

Why to watch Ikiru: Life-affirming, poignant, and beautifully sad.
Why not to watch: Your protagonist starts with stomach cancer. Depressed yet?
Posted by SJHoneywell at 8:34 PM