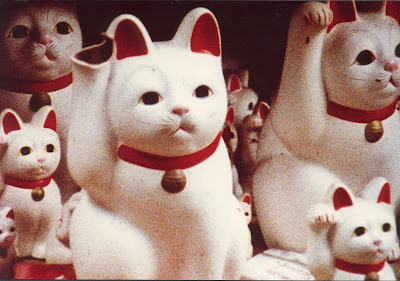 If you look up Sans Soleil (Sunless) on the Internet and start reading through the criticism or the reviews on IMDB.com, you’ll see the phrase “Sans Soleil is a unique meditation on [insert subject(s)]” over and over. Evidently, this is an art film geek’s way of telling people that this is an art geek film, one that can be appreciated only by those who wear berets, sip Chateau d’Something, and smoke clove cigarettes.

So let’s get this out of the way right away: Chris Marker’s film is absolutely a meditation on life, culture, art, time, and more. As for unique, I’m not entirely sure. There were large chunks of this film that reminded me pretty strongly of films like Mondo Cane, even down to the actual filmed deaths of wild creatures and some of the more disturbing parts of the circle of life—vultures pecking at the eyes of a dead giraffe, for instance.

The film is essentially a 100+ minute montage of images, primarily from Guinea-Bissau and Japan. There is no chronology or story; instead, the film is a series of short monologues delivered by a narrator, who is herself describing letters she has received from the filmmaker, Marker’s alter ego. Parts of the film act as history lesson on Guinea-Bissau and its rise to nation status from Portuguese colony and its bloody birth and early years. Other parts are commentary on Japanese television and culture, as well as the emerging culture of video games—still brand new in the film’s year of 1982.

Marker draws metaphors everywhere, linking Pac-Man to life, for instance, although not in the way that I would have. He comments through his narrator that the game symbolizes the relationship of individual and environment. To my mind the metaphor works better seeing the eponymous hero of the game as an endless consumer, pursued through an unending maze by little personalized demons that eventually trap and kill him…but then I’m not the filmmaker here, am I?

Regardless, Marker does not shy away from terrible images, seeking a sort of beauty in horror that he attributes is also a part of Japanese culture. Even pain must be exquisite, he says, and he gives us a taste of the horrific. It is a terrible moment to see a giraffe shot through the neck, blood fountaining in twin geysers from each side of the neck, terrible to see a man walk up and put a rifle bullet through the creatures head, terrible to see the giraffe’s fate as vultures plunge neck-deep into the eye socket. Terrible also are the images of death of the people of Guinea-Bissau plagued by war and revolution after revolution.

It is entirely possible that I am not the right person to truly comment on Marker’s work here. What I can say is that this film is special. It comes across not so much as a film with a cohesive or connected story, but as a meandering expression of ideals and philosophy. It comes almost as stream of consciousness as the narrator skips from topic to topic and back again, going where the images take her, or perhaps the images instead follow her train of thought through the letters received from Marker’s persona. It feels almost like reading someone’s private journal entries, provided the author majored in philosophy.

Is it unique? In some ways certainly, although Mondo Cane is its natural parent and Koyaanisqatsi is a direct sibling. I can say that while I probably didn’t understand all of it, I found it visually fascinating, even when it was also visually disturbing and terrible. I was never bored by it.

I feel like I need to watch it again, or perhaps again and again, to truly understand what Marker was trying to accomplish here. It’s a film that doesn’t seem to do well on a single viewing, only acquiring meaning and relevance through repeated exposure. It demands and deserves to be taken seriously and studied, and that may be its most defining character trait. It is important, almost certainly in ways that I only partially fathom.

This is not truly a documentary, because it documents nothing beyond our unseen and unheard author’s musings, but it does play and feel like a documentary. Also, I watched this film on several different media, so it’s difficult for me to pinpoint exactly where I watched it. I think, ultimately, Marker would approve of that.

A few last notes. I was tempted to watch Vertigo, since a lot of parallels are drawn to that film, but I simply didn't have time. Second, I can see where many would find the soundtrack here annoying or disturbing, but I really liked it, particularly at the end. Third, films like this don't bore me, but they do have a tendency to make me sleepy.

Why to watch Sans Soleil: Interesting and meditative.
Why not to watch: Disjointed and sometimes gruesome.
Posted by SJHoneywell at 11:54 PM