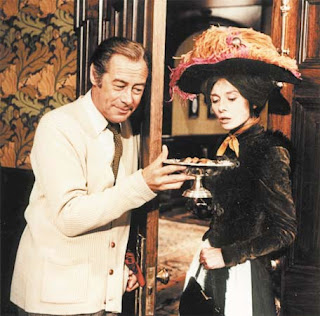 I just had my laptop rebuilt, which cost a little more than I’d like, but the gent who rebuilt it provided me with DVDs that will allow me to rebuild it myself should the worst happen. I appreciate that, because while it’s a pain in the backside to have this happen, being able to handle it myself means not having to shell out the cash when it’s needed. So, after reinstalling Office and recovering my backup of this blog’s archive, it was time to christen the machine with a movie.

For those not otherwise aware of it, My Fair Lady is one of the more lavish musicals coming at the tail-end of the Hollywood blockbuster musical period that bloomed in earlier decades. Our heroine is Eliza Doolittle (the always-wonderful Audrey Hepburn), a poor Cockney flower girl by trade. We discover early on that Eliza is not the brightest crayon in the box of 64, but whether this is by accident of her low-class birth or lack of native smarts, we aren’t sure yet. She is warned about a man taking down her speech, and immediately wigs out.

The man proves to be professor Henry Higgins (Rex Harrison) a phoneticist with a penchant for pegging people within a few miles of their home. He claims that Eliza is a guttersnipe not because of her clothing, but because of the way she speaks, and with proper training, she could be passed off as a society maiden inside of six months. As it turns out, he makes this boast to a man named Pickering (Wilfrid Hyde-White), who is himself a student of Indian dialects, and the two wander off, leaving Eliza on her own. We’re also introduced to Eliza’s father, who is a wastrel. After slipping him a little cash, she remembers the conversation from the night before, particularly the part about getting her a job considerably better than hawking flowers. She arrives at his house and demands lessons.

Higgins tries to get rid of her, but Pickering, who happens to be there, wants Higgins to make good on his boast of the night before. He agrees, she tries to back out, he bribes her with chocolate, and we have a plot.

As painful as it is for me to say this, Audrey Hepburn is really annoying for the first hour of this film. Oh, Audrey…you’re a good girl, you are, but you need to shut up.

Regardless of this, what we get is lessons for poor little Eliza, who struggles to overcome her poor background. It doesn’t seem to be working until, in that movie way that things happen, it suddenly does, and Eliza can say “mainly” and “plain” instead of “minely” and “pline” and “a cup of tea” instead of “cuppatea.” And it becomes time for Professor Higgins to test the girl out at a day at the races. Everything goes amusingly until she becomes very excited at one of the races and yells for her horse to “move [its] bloomin’ arse.” Despite this, she’s charming enough that she catches the eye of Freddy Eynsford-Hill (Jeremy Brett). It’s somehow important that Freddy and his mother are the people who bump into Eliza at the start of the movie, because they certainly don’t recognize her now.

Then we jump forward to the night of the bet, and Eliza is the hit of the night. Importantly for Higgins and Pickering, one of the guests at the ball is a Hungarian language expert named Zoltan Karpathy (Theodore Bikel). He determines to find out the truth of Eliza’s origin, and after a dance and some study, he determines that she is actually Hungarian royalty, which fills our phoneticist friends with glee. They congratulate each other for their cunning scheme, completely ignoring Eliza.

So, of course she runs away, back to where she started, but quickly discovers that she doesn’t fit there either. And, of course, Henry Higgins realizes just how empty his life is without her now that she’s gone.

This is a movie that pulls me in a variety of directions. On the one hand, it’s a musical, and it’s the type of musical in which people suddenly break into fully orchestrated song at the drop of a hat, making me wonder when they all had time to rehearse. That bothers me on a deep level. Whether because it’s a musical, or simply because of the time in which it was made, there’s also that lack of verisimilitude of Eliza suddenly changing her accent at the drop of a hat that galls a bit. Her accent at the end of the movie cannot be placed. She actually does sound like English is her second language, with perhaps Hungarian being her first.

So that’s the bad. Here’s the good. We can start with Audrey Hepburn, and as far as I would normally be concerned, we could stop there. Audrey Hepburn covers a lot of faults. But more than that, this is a film about language. Henry Higgins’s opening song/speech (more on this in a sec) is dead on—people are often kept in their positions because of how they speak. Many a person on the fringe of society could move toward the middle if he or she could quit speaking in an un- or undereducated patois.

As a guy with a degree in linguistics, I appreciate the fact that linguistics takes a central role in one of the great musicals in Hollywood history. Admittedly, Higgins is far more proscriptive than descriptive, which is sort of a linguistic no-no, but no matter. It’s cool to see the stuff that I geek out about take center stage in something that other people geek out about for different reasons.

Finally, a word on Rex Harrison. He doesn’t so much sing as talk his parts in rhythm with some attention to the notes. It works for me. I couldn’t take a steady diet of it, but I really like his take on a lot of the songs.

Why to watch My Fair Lady: Because despite all the singing and musical film unbelievability, it’s about linguistics! Yay, linguistics!
Why not to watch: Because most linguists are not so proscriptive.
Posted by SJHoneywell at 9:29 PM