Sin: More Fun to Experience than Listen to 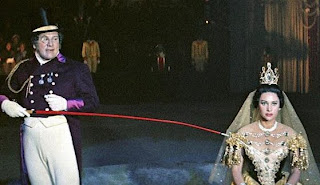 Max Ophuls is regarded as one of the greatest directors in film history. Shows what I know—as far as I know, I’d never seen anything he’s directed until today. Ophuls is best known for camera movement, particularly circular movements. If Lola Montes is any indication, he’s got a thing for picky little details and opulence as well.

Lola Montes, alternatively known as The Sin of Lola Montes, is the story of the eponymous woman, an Irish-born entertainer of questionable moral character. The film is loosely based on a real woman named Elizabeth (possibly Eliza) Oliver who used the stage name Lola Montes, posing as a Spanish dancer. Whatever her talents may have been, she is best known for her series of high profile love affairs.

The film, in what I can only assume is a huge chunk of artistic license, begins in a circus where the ringmaster (Peter Ustinov) is telling the audience that his troupe has a special member—the infamous Lola Montes (Martine Carol). The show starts with the audience being allowed to ask her anything (each question costs a quarter) about her scandalous life. From here, we start a series of flashbacks of Lola’s life, not really going further back than her first major affair, with composer Franz Liszt.

This is the path that the film will take over and over. The circus troupe essentially performs Lola’s life with Lola center stage, and we then regress into the major events of Lola’s life. The most significant is her affair with Ludwig I of Bavaria. The film follows her rise to something like power (as Ludwig’s concubine), her fall from grace, and ends with her eventual position as little more than a sideshow attraction at a circus, charging a dollar for men to approach her and kiss her hand while she sits in a cage near the menagerie.

So, obviously, it’s a rise and fall movie, with no corresponding rise at the end. There is no reward here, no redemption for anyone, least of all Senora Montes. At this point in her life, Lola is alive, but not really living. She’s going through the motions of life, (as evidenced by the decision of the circus to leave the net up when Lola performs on the high wire), but there is no longer anything in life for her to enjoy. The good part of her life is over—all she has left are her memories of faded lovers and times when her beauty did more than remind people what she once was.

It’s difficult, of course, to tell if the film version of Lola Montes is anything like the actual woman. The affairs with Liszt and Ludwig are at least based in fact. Beyond that, though, there’s really no way to know if the character portrayed by Martine Carol is anything like the woman who raised eyebrows around the continent for years. If I had to guess, though, I’d suggest that there are a few specific similarities combined with a host of inaccuracies, many of which are caused by the actor’s (or director’s) choice and/or limitations. That probably needs a better explanation.

The real life Lola Montes had numerous affairs in a very short amount of time. She married over and over, had to flee England because of bigamy charges, and appeared to change husbands like other people change their pants. She also seems not to have much in the way of real talent other than the talent of making men go bibbledy over her. The real woman must have been something very special. Martine Carol is nothing but flat. She seems not to have much personality on the screen. She’s sort of lifeless and passive, allowing things to happen to her rather than causing things to happen. Frankly, that’s kind of disappointing.

The circus, and the life told through flashback, are nice metaphors for this film. Lola’s life does appear to be something like a stage show—much more attractive from the audience than the reality of it could ever be. I like this metaphor quite a bit, actually. Lola is put into the spotlight as almost a cautionary tale—and more as a way to bring in the women customers as well, since the hope is that the women will want to live through the story as a sort of vicarious thrill.

Ophuls’s work is beautiful. There’s no denying that. But really, that’s all I have to say about it. Beyond the metaphor of the circus, I can’t say that Lola Montes made much of an impression on me in any way.

Why to watch Lola Montes: It’s your only chance to see Max Ophuls in color.
Why not to watch: It’s the same basic plot over and over.
Posted by SJHoneywell at 11:56 PM