The Hooker with the Heart of Tin 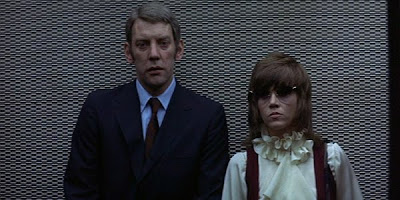 After the last few movies, I needed something a bit easier on the grey matter and on the retinas. A mystery/thriller with Donald Sutherland and Jane Fonda? Sure, why not? It might be entertaining, and certainly wouldn’t be filled with the attempted gross outs (Mondo Cane), extreme excesses (Satyricon), or realistic wartime horror (Idi i Smotri) I’ve spent the last few days enmeshed in. Challenges are good and all, but sometimes, I need a break.

Klute is a pretty straightforward thriller, actually. A businessman named Tom Gruneman (Robert Milli, who appears only in a photograph) has gone missing. The sole lead in the case is a pornographic letter written to a New York prostitute named Bree Daniel (sometimes Bree Daniels, depending on who’s talking, and played by Jane Fonda). Daniel has told police that she received additional letters as well.

With the case stalled, an executive at Gruneman’s company, Peter Cable (Charles Cioffi), hires a detective named John Klute (Donald Sutherland) to investigate the crime. Klute is a friend of the Gruneman family, and is thus above suspicion in the current case. Klute heads to New York, takes a room in the basement of Bree Daniel’s building, and taps her phones. He also confronts her with questions about the missing man.

Eventually, he admits to her that he’s been bugging her apartment and asks again for help. She tells him that a few years previous, she was viciously beaten by a john, but she doesn’t recognize Gruneman from the photo. She does remember that she got the name of the john from her former “boyfriend” (read: pimp), Frank Ligourin (Roy Scheider). When asked, Ligourin reveals that one of his other girls passed the john on to both Bree and a hooker named Arlyn Page (Dorothy Tristan). The original girl committed suicide, and Page is now a junkie.

Klute and Daniel, now beginning a sort of romance, track down Arlyn, who is completely strung out. She remembers being attacked by a john as well, but says that Gruneman wasn’t the man—the culprit was an older man. A few days later, her body turns up as well, another apparent suicide. Naturally, this piques Klute’s interest, and he starts narrowing down his list of suspects. He also believes (and probably correctly) that Bree Daniel is next on the list of targets.

There are some nice touches in this film. One of my favorites comes quite early. As we learn about the life the Bree Daniel leads, we see her interacting with one of her johns, a businessman from Chicago. During the culmination of their business together, she seems to be enjoying herself, and is whispering sweet nothings into the guy’s ear, and just for a second, she looks at her watch. She doesn’t break stride and he never notices it, but that two seconds of film tells more about the character than any conversation in the film. It’s a great moment, and a revealing one.

We are also privy to the therapy sessions Bree has with her analyst. At first, she seems to suggest that while she wants to move away from her life of prostitution, it has particular benefits for her. Because of the situation, she always knows what to expect, and she’s always in charge of everything that’s going on. While there’s no real connection between her and her clients, she does come away with a sense of being in control, at least for the hour she’s with them. We also see her attempting to launch an acting and modeling career, and that going pretty poorly, which is why she continues to turn tricks. As the film continues, she reveals more and more about herself in these sessions, and the portrait of the character becomes much more complete.

Fonda’s performance is a good one, and carries the film. Sadly, I didn’t find a lot else here that did much for me. It may be that I’m a jaded moviegoer or that films have made me attuned to subtle shifts and glances into character. It may be that when the camera lingers on someone or something for no apparent reason it’s because there really is a reason and we just haven’t been told yet. Maybe I’m just really good at guessing the ending. Whatever it is, I was not surprised by the reveal. I pegged it about halfway through the film or so, and was not surprised by the last 20 minutes of the film.

Additionally, the romance between Bree and Klute feels forced. It doesn’t really work for me except in the sense that we have a male and a female character on screen together for a lot of the time, and so the film naturally squishes them together in the only way men and women fit together in a film. It’s a cobble, and not one that I buy into.

Finally, and tragically, despite the fact that I knew what was coming, the ending builds up a great deal of tension. And then…the mystery culprit does something that to me feels completely out of character and sent the whole house of cards crashing down. The last five minutes or so of the film don’t ring true to me, which is really disappointing.

So, is the film worth watching? Sure. It’s by no stretch of the imagination a great film, or even one of the best noir films out there. It is, however, a film that shows off the real talents of Jane Fonda at the peak of her career. It may very well be her best role (and it did win her an Oscar). That said, it’s not my favorite of her movies—I found They Shoot Horses, Don’t They? to be far more moving and far more watchable.

Jane Fonda’s certainly had her ups and downs, and plenty of people (fairly or unfairly) dislike her because of her political past. Regardless of that, this film is worth watching for her because she inhabits this role beautifully.

Why to watch Klute: Jane Fonda, pure and simple.
Why not to watch: The unfolding of the plot is more ho-hum than it should be in a thriller.
Posted by SJHoneywell at 12:47 AM