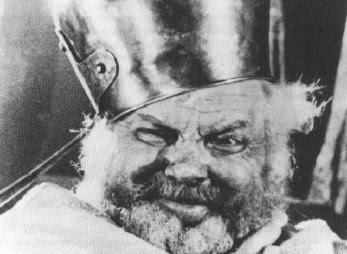 Campanadas a Medianoche (Chimes at Midnight, or more commonly Falstaff) takes many of the important scenes from Shakespeare’s two “Henry IV” plays, “Henry V” and “The Merry Wives of Windsor” and puts them in one place, a sort of Falstaff’s greatest hits reel, although there is quite a bit here that concerns Prince Hal far more than it does Falstaff and his ilk. Still, it is Falstaff’s film. There is nothing really new here for those who know their Shakespeare; it merely offers the advantage of being the condensed and concentrated Sir John in one package rather than spread out over four.

Falstaff is a rogue, of course, in every sense of the word. He has not many positive qualities save that he truly does seem to love his friends. This doesn’t stop him from harassing them, beating them, and taking the credit for everything they do. He is vastly overweight, a drunkard and a whoremonger as well as a coward. Into this role steps Orson Welles, a good 20 years past his trim physique in Citizen Kane, and larger than his bloated character in Touch of Evil. This is the Welles I remember as a kid—hugely fat, but possessed still of that remarkable voice.

Fortunately for us, this is still Welles in possession of his skill in filmmaking, because Campanadas a Medianoche is the sort of brilliance that few filmmakers could legitimately attempt, let alone pull off. Welles, having become something of an arthouse director at this point in his career, apparently felt free enough to direct what he wanted and do what he wanted, damn the critics and the public both. He plays Falstaff as close to perfectly as can be imagined, a combination of cowardice and bravado, telling massive lies with a straight face, claiming credit for everything that happens around him.

While the film focuses on Falstaff, the story is really about Prince Hal (Keith Baxter), who eventually becomes King Henry V. He is a dissolute youth, preferring the company of Falstaff and other thieves and hooligans. He responds to the call of his father, Henry IV (John Gielgud) to attend the Battle of Shrewsbury and help put down the rebellion of Henry Percy (Norman Rodway). The battle done and Percy slain, Hal returns to his waywardness and sloth. The death of his father, though, causes Hal to awaken to his responsibility, which is where we get Henry V.

It is the relationship between Hal and Falstaff that is most interesting. It’s obvious that the two love each other, but it’s evident earlier in the film that Hal is aware that he will have to divorce himself from Falstaff when he becomes king. There is a bit of play acting, first with Falstaff as king, then with Hal as king and Falstaff as Hal. It is in this scene that we learn of the eventual fate of the pair. Falstaff, playing as Hal, begs his father not to banish Falstaff, heaping praise upon himself. While he is pretending to be Hal, it is evident that he is begging Hal to keep him close when he does become king, and Hal acknowledges that he will eventually have to force the man away.

Shakespeare, when done well, is sublime, and this is Shakespeare done very well indeed. It’s a shame Welles didn’t get through the entire catalog. In many ways, a good adaptation of Shakespeare is like watching a well-loved film multiple times. We know what is there, but there is true joy in seeing it acted well and with conviction. Welles, for all his missed potential and physical dissolution, remains one of the three or four best cinematic directors of Shakespeare to ever yell, “Action!”

It’s also worth noting that the Battle of Shrewsbury is magnificent here. While the film is in black-and-white and certainly limited by technology, the battle sequence is still highly effective. Films like Braveheart stole unabashedly from Shrewsbury here, and despite the lack of color, these scenes still look modern.

Campanadas a Medianoche has never gotten a DVD release in the U.S., making it extremely difficult to find. You could do worse than to follow this link.

Why to watch Campanadas a Medianoche: Shakespeare the way it should be done.
Why not to watch: By this time in his career Welles was planetary in scope.