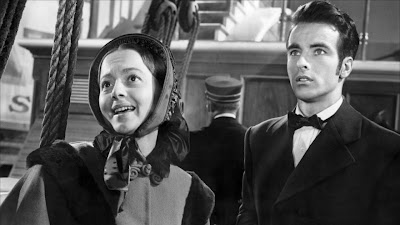 I work with a guy named Ron who has a thing for Olivia de Havilland. We’ve discussed this back and forth with him pushing de Havilland and me stumping for Barbara Stanwyck. While I won’t ever give over to Ron on this, he’s got me in the fact that Olivia de Havilland won a pair of Oscars and Stanwyck, for all her nominations, got skunked. One of those Oscars came from her role in The Heiress.

This is a strangely dark and angry little romance of both manners and ill manners. Young Catherine Sloper (de Havilland) lives a quiet and solitary life with her father, Dr. Austin Sloper (Ralph Richardson) and her aunt, Lavinia Penniman (Miriam Hopkins). She is a plain girl, shy and retiring, and spends her time doting on her father and tending to her embroidery. Her father compares her unfavorably to her late mother, who was vibrant and lovely. Her aunt, though, sees the good in her and wants nothing more than for her to be happy.

Enter Morris Townsend (Montgomery Clift), who immediately takes a liking to the girl and begins to pursue her romantically. At least that’s what he claims. Her father seems to disagree, though, thinking that Morris is after her for her inheritance. She’s inherited a tidy sum from her late mother, and stands to inherit twice that amount more when her father dies. Morris, we soon discover, is fairly dissolute. He spent his own fortune roaming around Europe, buying himself the finest clothing, and essentially ignoring his widowed sister and her five children. With that as his history, Dr. Sloper smells a bit of a rat.

The awkward Catherine refuses to see this and is convinced that he loves her for her and not for her money. Morris comes to plead his case, and does so unsuccessfully. He creates a plot to elope with Catherine in two nights, but she convinces him that they should elope that very evening. Running off to a small church and marrying, and damn the inheritance, since her father has threatened to rewrite his will should she marry Morris.

In a stunning turn of unexpected assholery, though, Morris doesn’t show up. Instead, he borrows money for passage and goes to California, completely avoiding the situation and abandoning Catherine to spinsterhood. Eventually, Dr. Sloper dies, and while he threatens to cut off Catherine’s inheritance, he does not, leaving her a very wealthy woman.

Of course, Morris returns. The remaining 15 minutes or so of the film, though are too good to spoil, so I won’t. Suffice to say that the ending is extremely satisfying.

There’s a lot of this film that really works, and a lot of what works is de Havilland. She was, as most of the classic Hollywood legends were, a stunningly attractive woman. Here, she is made plain and average. She’s not unattractive; she’s just very, very ordinary. She also tones down her vibrant personality in exchange for one that is painfully shy and drab. It’s a transformation similar to that of Charlize Theron in a film like Monster, or her own transformation in The Snake Pit.

I also like the performance of Ralph Richardson here. He’s generally an actor I enjoy watching, and in this film, he has a tendency to steal most of the scenes he is in. He plays the doctor with a combination of supreme knowledge and decided malice. One of the most effective scenes here is when he confronts Catherine about the real motives of Morris, telling her that she has no real good qualities save that her embroidery is consistently good. It’s a magnificent moment for both actors—he, acting as a doctor performing what he sees as lifesaving surgery without emotion, and she, realizing in that moment (as she tells Lavinia) that her own father dislikes her. His lack of emotion and her flood of realization at this cruelty are both palpable.

I should mention Montgomery Clift here. He’s certainly a capable actor, as his career attests, but I don’t love him here. Most of what draws me away from him is his accent. There is a touch of England in most of the characters in the film, while Clift comes across as a bit of a hick, like the lone American in a British drawing room drama. There’s something off-putting about the way he speaks throughout the film. Couple this with the fact that not a single person uses a single contraction, and there are times when the proceedings feel a bit too stiff and formal, or as formal as they can be when one person can’t seem to get the hang sounding like everyone else.

Regardless of that, The Heiress is a masterful film, precise and measured, and served with exactly the right combination of emotional reactions at exactly the right time. I have a feeling that this is a film that I will revisit again in the future, and I look forward to doing so. As much as I hate to say it, Ron might be onto something here.

Why to watch The Heiress: Olivia de Havilland at her very best, and an ending that is surprising.
Why not to watch: Montgomery Clift’s accent.