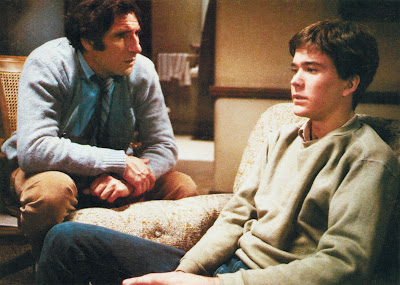 I’ve owned a copy of Ordinary People for about a year but have never watched it until today. I have a history with this story, though, despite never having seen it. When I was a junior in college, I was in the theatrical version. I played the jackass from the swim team, the same role that Adam Baldwin has in the film. So I know this story. I have pretty vivid memories of this story, having seen it acted out in front of me every night for a couple of months. When I saw a copy for sale, I bought it because I knew I’d have to watch it eventually. I’d have bought it anyway, just for that small connection to my past.

Having been in the play, and having read the play multiple times based on Judith Guest’s novel, I made the assumption that the film would be about Conrad Jarrett (Timothy Hutton), since he very much seemed to be the focus of the play. And yes, in many ways, the film is about him, which is why it seemed so strange to me going in that Timothy Hutton won the Oscar for Supporting Actor. After all, he’s on screen a lot of the film—isn’t he the lead?

I get it now. Ordinary People is the story of the Jarrett family, and while Conrad is certainly a part of it, there is far more going on here. The Jarretts, when we meet them, are a family torn apart. The older of the two boys, Buck, was killed in a boating accident, and months later, crippled by guilt, younger son Conrad tries to kill himself, but survives. We pick up the story about a month after Conrad has come home from a psychiatric hospital in which he spent a few months to recuperate both mentally and physically. Naturally, there is still a great deal of tension between him and his parents, Calvin (Donald Sutherland) and Beth (Mary Tyler Moore).

So really, while we do spend a lot of time with Conrad, the film is more about the family as a whole, and as soon becomes evident, the central character is Beth, despite the fact that she spends the least time on camera. Conrad’s relationship with his mother and Calvin’s relationship with his wife take center stage, because much of the film revolves around how Beth deals with the death of one son and the attempted suicide of the second.

Much of this we don’t know at the beginning. Conrad seems like a pretty typical high school kid. He sings in the choir and swims on the swim team. His coach (M. Emmett Walsh) notices that Conrad isn’t his old self, and we get hints from his father that there is a doctor he should call. Eventually, Conrad does call the doctor, a psychiatrist named Berger (Judd Hirsch), and it is in these scenes that the exposition takes off, and where, in my mind, the movie really takes shape. Hirsch’s performance here is the best of his career.

What Conrad wants is for everyone to stop treating him with kid gloves. He’d also like some sort of connection with his mother, which seems impossible. It is Calvin who coddles him the most, but this is because he feels a sense of guilt as well. Beth here is the most interesting character in the film, though, because of how the events from the backstory have shattered her world. The death of her older son wounds her, of course, but it is Conrad’s attempted suicide that destroys her. Beth is someone who needs that illusion of perfection at all times. She must appear to be in control and have every t crossed. The death of her son can be handled because no one had any control over it. But Conrad’s suicide was intentional, and it is something she takes personally.

Much of this comes out in some of the best dialogue written in the last few decades. In a session with Berger, for instance, he indicates his mother’s problem with his suicide attempt by telling the doctor that towels had to be thrown out and the tile regrouted. She fired the maid for dusting wrong, she could never forgive him for the mess he created. And he’s right. When Beth finds out that, midway through the film he has quit the swim team, he accuses her not of being angry that he quit, but of being angry because she found out from his friend’s mother. It’s a great moment because it is so real and so human. Beth needs that vision, that illusion of perfection, and anything that takes it away from her is viewed as an attack, as something intentional.

That, more than anything, is the strength of this film. These are real people going through real problems and trying to deal with them in a real way. I never got the sense that I was watching movie caricatures or allegorical characters. These people are real and human and tragic.

As important as this film may have been for Timothy Hutton (he did win an Oscar, after all), and as much as it established Robert Redford as a potential director (he won one, too), the real revelation here is Mary Tyler Moore. This is a woman who had, for years, made people laugh on television. She was (and presumably still is) a fabulous comedienne with great timing. And here, she plays so much against type and does it so flawlessly, that I wonder why she didn’t do more serious dramatic work.

I didn’t love my time in the theater. In fact, after I performed in the stage version of this story, I gave up acting and changed my minor from theater to psychology. Now, in retrospect, I’m damn proud to have been a small part in bringing this story to life, because the story is that good, and this film is better than just good. See this if you haven’t.

Why to watch Ordinary People: Because it's incredibly good.
Why not to watch: Because it hurts.
Posted by SJHoneywell at 10:08 PM