The End of Chaplin

I enjoy silent comedies quite a bit. Of the great silent comedians, I enjoy Harold Lloyd, I have great respect for Chaplin, and I have a deep and abiding love for Buster Keaton. Naturally, this means I watched all of Keaton’s films pretty quickly. Chaplin I’ve been savoring a bit, at least until now. The three comedians were all quite different. Lloyd was in many ways the most American in his characters’ outlook. Keaton offered a more zen outlook on his comedy. Chaplin is all about the pathos. 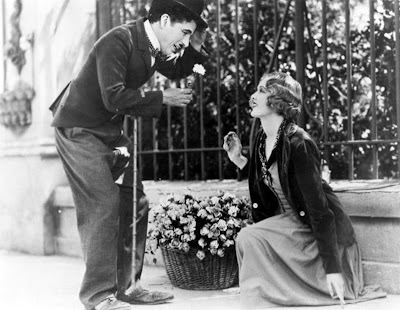 City Lights doesn’t stray too far from the formula that worked for him his entire career. Like most silent comedies, the plot is very simple. The action tends to drive that simple plot forward very slowly, because the action is more about the slapstick than the actual story. In this case, the plot is pretty easily resolved, with the additional material there only for laughs.

That’s not a bad thing—these are good laughs. Chaplin plays his trademark Tramp character. Early on, he encounters a blind flower seller (Virginia Cherrill) and becomes smitten by her beauty and her tragedy. He also rescues a man (Harry Myers) about to commit suicide. These two things seem unrelated, but will merge as the film closes. It turns out that the man the Tramp rescues is a drunken millionaire. He thanks our hero by taking him out for a night on the town. The problem is that when he wakes up and sobers up, he has no memory of the previous night—not his suicide attempt, his rescue, or the evening that followed.

In the mean time, the Tramp spends time with the blind flower girl, and discovers that there is an expensive operation that can cure her blindness. He also discovers that the girl owes her landlord rent and is about to be evicted. Unable to get the millionaire to remember him, the Tramp takes (and subsequently loses) a job as a street sweeper. Eventually, his only recourse to cash for the girl is to sign up for a boxing match. He makes a deal with the other boxer to throw the fight and split the $50 purse, but is forced to fight another man instead, who won’t take the deal.

Of course, this is a comedy, which means it has to work out in the end. The ending is sweet and heartfelt, if perhaps a bit twee. But it’s cute and impossible not to smile at.

But the plot, sweet as it may be, is not the reason to pay attention here. The whole purpose of the film is to see what Chaplin does throughout. The gags are as good as we’ve come to expect from Chaplin, with the boxing match near the end a true highpoint in not just the film, but in his catalog. It’s silly stuff, the kind of thing that young children would find riotously funny today (at least the non-jaded children, and even some of them). One of Chaplin’s great talents was finding a gag and playing it as many different ways as he could—the back and forth shuffle of Chaplin, his opponent, and the referee here being a prime example.

For many people, City Lights is Chaplin at his finest. That’s a hard thing to argue against, even if my preference might be more for the opening half hour of Modern Times. There’s no doubting that while his last silent film is stronger in places, City Lights is more consistently funny and on plot all the way through.

If anything, I’d have liked this to be a little longer. Chaplin was and is a joy, and a running time of under 90 minutes feels like short change. 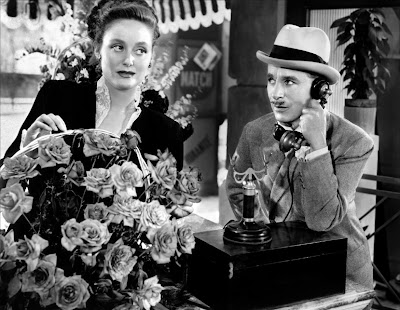 That shorter running time may have better served Chaplin’s Monsieur Verdoux, because at the 90 minute mark here, I was ready for the film to be over, and knew that there was still a good half hour left to go. This is the story of a Bluebeard, a man who marries women and murders them for their money and property. He tells us at the start of the film that life was fine until he lost his job in a bank when the markets crashed. Now, with a wife and child to support, he turned to a different line of work (killing widows) to make ends meet.

We see him at work several times during the course of the film, and as the film starts, we learn from the family of his latest conquest that Verdoux’s latest (and late) wife has just emptied her bank accounts of 60,000 francs. We cut to the man himself cleaning up after the deed and engaging to sell the home. The prospective buyer is another widow who he sets upon wooing, a plot that will take us to near the end of the film.

In the meantime, he is already married not only to his first wife, but to several others, and he proceeds to go on a sort of murder tour around France, bumping off women and collecting on them, spinning crazy stories about impending bank collapses to get them to draw their money out, and then doing the deed and making off with the benefits. One of these wives, Annabella Bonheur (Martha Raye) has a nasty habit of not dying, leaving him in something of a predicament.

Thanks to the Hays Code, Monsieur Verdoux is destined to be caught by the end of the film. Criminals, after all, couldn’t win under the Hays Code, and no one could be seen to truly benefit from the commission of a crime. So naturally, everything will come to a head, and does when the foghorn-voiced Annabella arrives as a guest for his latest wedding.

My problem with Monsieur Verdoux is not that it isn’t well made or that it isn’t entertaining. It’s beautifully filmed and it’s acted well, and there are even a few laughs in it here and there. My problem is that it seems so opposite the typical Chaplin comedy. While terrible things happened to the Tramp all the time, they were always caused by circumstances beyond the poor guy’s control. The Tramp was always lovable and sweet, someone whose tragedies were all the more poignant because we as the audience want him to be okay. Verdoux in this film is cruel and heartless, everything the Tramp seemed to stand against.

I don’t really mind heartlessness, but I don’t like it for its own sake, and that, more or less, is how I took Monsieur Verdoux. Chaplin aims for pitch black comedy, and while it seems impossible that he would ever miss completely, he misses on quite a bit of this. I’m not used to, or much in favor of a Chaplin character who isn’t worth rooting for, and Verdoux is simply not. This film comes off as mean spirited in a lot of ways, and that seems so wrong.

There are other, similar comedies, of course. Arsenic and Old Lace, Kind Hearts and Coronets, and even a film like The Ladykillers cover similar territory, and do it with better humor and a lot more panache. I’m disappointed here, not because this is a Chaplin talkie, but because a film like The Great Dictator was left off the List when it much more rightfully belongs here. Monsieur Verdoux covers territory better mapped by others, and Chaplin is better than playing this sort of rogue, no matter how charming he might appear.

Why to watch City Lights: It’s sweet and heartfelt.
Why not to watch: It’s over too quickly.

Why to watch Monsieur Verdoux: Of the three great silent comedians, only Chaplin made a solid transition to talkies.
Why not to watch: He made better talkies.