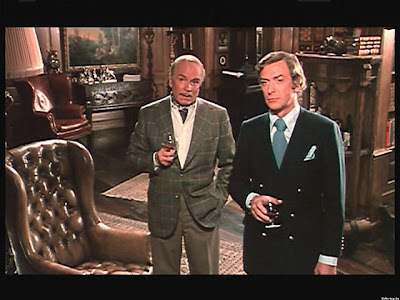 Years ago, when I was a relatively young lad, I was watching television with my father when a movie came on. My dad has always been a fan of the intricate, especially when it comes to puzzles and mysteries. He’s brilliant with crossword puzzles, for instance. I could tell right away that Dad really enjoyed this movie, and I think he’d seen it before. The film in question was Sleuth, which I just watched again for the first time in about 30 years.

I can’t explain why this film has been so difficult for me to find, considering the both stars, Laurence Olivier and Michael Caine, and the director, Joseph L. Mankiewicz, were nominated for Oscars. But NetFlix doesn’t have it (they have the remake with Caine and Jude Law) and my library system doesn’t have it. Sleuth, for all its greatness, is nearly impossible to find, which is a damn shame.

This is a film that I’ve wanted to rewatch for some time, and I’m happy to say that it did not disappoint. Here’s the thing about Sleuth: I remembered this movie almost perfectly. I didn’t remember all of the details, but I did remember many of them, and I also remembered al of the major plot points, the double crosses, and the twists. I hadn’t seen this movie in at least three decades (possibly more), but I still remembered the details.

This is a devious little tale that starts simply and builds through its two plus hours. We start with a pair of gentlemen meeting in a beautiful English garden. The older man is Andrew Wyke (Olivier), a member of the gentry and a writer of detective novels of the sort made popular by Agatha Christie. In Wyke’s books, his detective Merrydew always has all of the answers while the police are bumbling simpletons constantly in awe of the great man’s brilliance. The younger man is Milo Tindle (Caine), who runs a couple of hairdressers’ shops. It would seem they have little in common, but there is one important point between them. That single fact is that Milo is having an affair with Andrew’s wife.

And now we take a turn for the surreal and strange. Andrew has decided that he doesn’t much love his wife anyway. Besides, he’s got a mistress already. The problem as he sees it is Marguerite, his wife. Poor Milo doesn’t have a great deal of money, and Marguerite is used to being kept in something much more than simple style. His worry is that after a few weeks with Milo and living in poverty, she’ll come crawling back, and he can’t have that. Instead, he proposes something of a game. The idea is that Milo will break into the house in disguise, “steal” Marguerite’s jewelry, and fence it through a fence that Andrew has arranged. This will give them enough money to live decently and keep Marguerite away for good.

Of course, that really isn’t what Andrew is after. Instead, this becomes a double cross. Andrew, once he has Milo completely in an unexplainable position, he shoots him.

I’m not going to spoil this, because this is a film that deserves to be watched cold. Knowing the set-up (slightly less than the first half of the film) is enough to get you going without ruining the wildly entertaining second act or the vicious, revenge-served-cold third act in which both Caine and Olivier earn every bit of their Oscar nominations.

Sleuth is fascinating and entertaining, a film that never slows up or gets dull. Our two main characters are well drawn and fully three-dimensional. Olivier is a man too sold on his own talent and breeding and very much on his own intelligence and skill as a gamesman. Caine is ruthless and low, but charming, the sort of man with a hint of danger about him, but in a way that is almost impossible to put a name to. The joy here is in part with the intricate and detailed plot. What’s more of a joy, though, is the fact that the two men woul are battling each other through the entirety of the film are both smart and devious.

I like this film a lot, and I’m happy to have had the chance to watch it again. I cannot fathom why it is so difficult to find (again, the remake is ubiquitous at every place that sells movies of which I am a sometime patron). If I ever found this film on a shelf, I’d buy it because it’s a film that deserves to be watched more than once. Admittedly, the plot twists don’t hold up to multiple viewings—the film is less effective when you know what happens next. The rewatching is more for the joy of seeing Olivier and Caine work with such a great script and in such a magnificent setting.

It’s worth noting that this was Mankiewicz’s final film. It’s a hell of a last film and shows that even toward the end of his career, he lost none of his ability to surprise an audience, shock them, or simply wow them with the tale unfolding on screen.

If you can find Sleuth at a rental store or your library, get it and watch it, and bask in two of the finest performances of the 1970s. If you can’t find it, set aside some time, pour yourself a glass of something posh, and click here.

Why to watch Sleuth: It’s a great damn story.
Why not to watch: The middle part is more obvious to the audience than it should be.