A Pirate's Life for Me 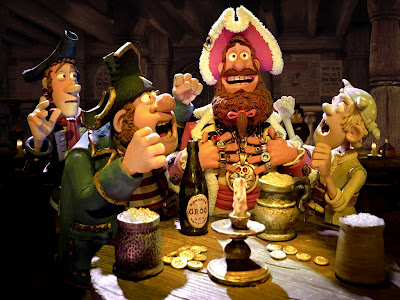 Sue and Gail went to a dance performance yesterday, and I was left at home with my younger daughter, Maxine. Mack was bored and the day was rainy, which left out gokarting, so I took her to see The Pirates! Band of Misfits rather than taking her bowling. I’m a fan of Aardman Animation; I love Wallace and Gromit in their many iterations, and I’ve been of the opinion that Chicken Run should be on this list. So, while she wanted to see it, I have to admit that I wanted to see it, too.

We’re introduced early to our main characters. Leading this particular ship of crusty pirates is (and yes, this is his name) The Pirate Captain (Hugh Grant). He is nobly assisted by The Pirate with a Scarf (Martin Freeman), who also goes by Number Two. Our other pirates are similarly named: The Pirate with Gout (Brendan Gleeson), Albino Pirate (Anton Yelchin), The Surprisingly Curvaceous Pirate (Ashely Jensen—the character wears a false orange beard made of carpet), and The Pirate Who Likes Sunsets and Kittens (Al Roker). They aren’t very good pirates, and tend to be most excited about Ham Nite on the ship. But they all agree that the best thing about being a pirate is Polly, the ship’s mascot.

The Pirate Captain wants nothing more than to win the Pirate of the Year contest. Sadly, he isn’t a successful pirate, and the bounty on his head is a mere 12 doubloons. Standing in his way of the honor are Peg Leg Hastings (Lenny Henry), Cutlass Liz (Salma Hayek), and Black Bellamy (Jeremy Piven). Despite the fact that he’s out of his depth, The Pirate Captain goes back to sea and a-raiding, but never has any success.

On his last attempt, he raids The Beagle, Charles Darwin’s ship. Darwin (David Tennant) is depressed because girls don’t like him, and while he doesn’t like being raided, he makes an incredible discovery. The Pirate Captain’s mascot isn’t a parrot, but a dodo, a bird thought to be extinct for hundreds of years. Darwin convinces The Pirate Captain to take Polly to London for the Scientific Discovery of the Year contest, which comes with untold riches. The problems here are two-fold. First, it’s soon evident that Darwin wants to steal Polly for himself. Second, Queen Victoria (Imelda Staunton) hates pirates. Hates them.

That’s our set-up, and the film follows from that. There are a couple of twists along the way which are better left to the film to reveal instead of me, because they’re pretty entertaining. That said, the actual events of the film are not really that surprising. This is a film that doesn’t quite telegraph itself, but that doesn’t do anything that is completely out of the norm. That’s expected, since this is a family film. I wasn’t honestly expecting this to go somewhere different. I knew everything would end up happily, and I’m okay with that.

The character of Charles Darwin is where I take issue with the film. I don’t have a problem with poking fun at Darwin or portraying him as something of a spineless nerd. He wasn’t, to my knowledge, but it works for the film. I love the fact that when we return to London and enter his home, we discover that he has a monkey butler named Mr. Bobo. Darwin tells us that his original theory was that if he put clothing and a monocle on a monkey, it would turn him into something like a “man-panzee.” It’s cute, and Mr. Bobo is a great character.

No, where I have a problem is how Darwin works in the film. He’s comic relief, and that’s fine, but he’s also a criminal. Darwin is a scientific hero; the man is unarguably one of the most important scientists in the history of the world. Did we need to make him a criminal? Was it necessary to essentially equate Darwin with evil? There’s already a culture of anti-science in the United States and elsewhere, and we already live in a world where kids (and many, many adults) distrust science because it doesn’t agree with their multi-centuries-old holy book. Making this incredibly important figure a weak-minded criminal isn’t going to help.

Beyond that, I enjoyed the film. The animation is beautiful and seamless, and proof that Aardman has continually learned from its past films and gotten better and better. So, the story is intentionally silly and fun, and the visuals are as good as you have seen from this style of animation. You could do a lot worse than to take your kids to this, but do me the favor of explaining the importance of Darwin to them when you leave the theater.

As a final note, I saw the 3D version. I typically hate 3D, but it was well done here.

Why to watch The Pirates! Band of Misfits: Great claymation is a rarity, and wonderful to behold.
Why not to watch: Do we really have to make one of science’s greatest heroes a villain?