A Cheerful Touch of Misogyny 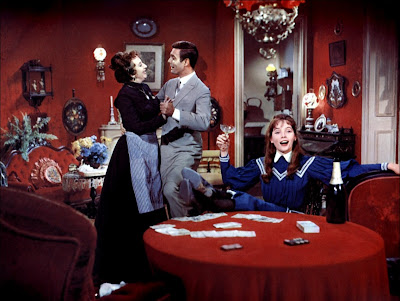 I have a friend named Lori who loves musicals. Loves them to death. She gets mad at me when I complain about musicals. Then again, she’s more cinematically limited than I am, in that there are a good dozen genres she won’t watch. Anyway, every now and again I talk to her about the stuff that I’m watching. When musicals on The List came up, she flat out told me I shouldn’t watch Gigi. It wasn’t because she didn’t think I’d like it. It’s because she absolutely hates it. Lori was right.

Hate isn’t a word that I bandy about loosely, either when writing about film or talking about anything else, and it’s probably too strong a word for my feelings about this film. It’s safe to say, though, that I really didn’t like it, and I had a difficulties paying attention to it at times. It’s a film that features the sort of joyful misogyny that only a musical from the ‘40s or ‘50s can. That, more than anything, is my biggest problem with the film.

We start with Honore Lachaille (Maurice Chevalier) who is an aging playboy (he was pushing 70 at the time). He tells us all about Paris in 1900, and how he is a “collector” of beautiful things. If you get that to mean that Honore collects women, you’d be correct. For the old dude, the younger the better. He’s not interested in women of his own age, but in young women, which is really pretty creepy. It’s not too long before the musical part starts and he sings “Thank Heaven for Little Girls,” which in this context has a real pedophilia vibe to it.

Honore’s nephew is Gaston (Louis Jourdan), who is bored. He’s bored with life, with Paris, with women, and with everything else. In fact, the only thing Gaston really likes is Madame Alvarez (Hermione Gingold) and her granddaughter Gigi (Leslie Caron). He’s comfortable in their apartment, and Gigi likes playing cards with him. Gaston, of course, is filthy rich and is thus a catch, but he’s far more interested in lovin’ ‘em and leavin’ ‘em than he is in marriage. Because this is evidently a thing in 1900 Paris, Gigi is being trained as a courtesan (read as: rich man’s prostitute) by her Aunt Alicia (Isabel Jeans).

This is where we get the rest of our playful misogyny—Alicia is trying desperately to convince Gigi that the only thing that matters is hooking a man for a short period of time and getting him for all he is worth while he’s on the hook. For a musical, it’s a surprisingly cynical attitude, and it’s pervasive throughout the film. Gaston, for instance, finds his current lover with a lower class guy, so he pays the guy to leave Paris and dumps the woman on the spot. She essentially fakes a suicide (too little a dose of poison), which Uncle Honore treats as a triumph for his nephew, and toasts him, hoping for many future suicide attempts from jilted lovers.

Of course, as the film wears on, Gaston realizes that Gigi has grown up into something more than a little girl. Gigi, of course, thinks he just wants her for a little rumpy-pumpy and while she’s not entirely comfortable with it, she agrees, although hesitantly. At first she doesn’t, which causes Aunt Alicia and Madame Alvarez to wet their knickers, and then she goes along with it. After all, it’s all about the fancy jewelry. Of course, though, we have to have the happy ending as the two reconcile, and based on what we’ve seen in the film thus far, we can expect infidelities and scandal within the year.

I’m not guessing at that. We learn at one point that Honore had a fling with Madame Alvarez in the past. He admits to her that he was thinking of proposing to her, and since he couldn’t have that, he ran off and cheated on her essentially until she caught him. This, by the way, is viewed as a wacky escapade, and leads into the singing of “I Remember It Well.” After all, no one in Paris can really be mad at infidelity for so noble a purpose as avoiding marriage.

So, the film is morally gray at best, treats women as objects, and for 95% of its running time puts forth the idea that casual sex for money and presents is the way proper society behaves. And for some reason I can’t fathom, this film won the Best Picture Oscar. I won’t say that 1958 was a particularly weak year—given the field that I’ve seen, I’d have gone with The Defiant Ones, and given an open field, with Touch of Evil. Gigi wouldn’t have made it to the nomination stage, let alone walked away with the trophy.

And this, folks, is why I tend to be leery of musicals.

Why to watch Gigi: There are songs here that you know.
Why not to watch: Hard to believe this was actually the best picture of 1958.
Posted by SJHoneywell at 10:44 PM