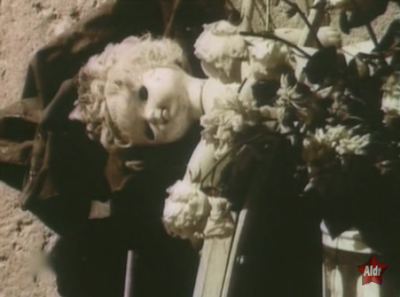 I started looking through my bookmarks today to check out some of the films I’ve found on the internet. As it happens, Sunday tends to be a good day for me to watch something on the laptop because I’m not teaching and have been pretty good about getting my work graded quickly. Unfortunately for me, I discovered today that a number of films that I had found and bookmarked have since been removed—all within the last couple of weeks. So it looks like I’ll be burning through as many that remain as possible in the weeks ahead, just to avoid having to search for them again. Of these, I selected Astenichenskiy Sindrom (The Asthenic Syndrom) for today for one particular reason.

That reason is simple, and perhaps does not speak particularly well of my desire to watch this film. I can’t claim this is a film I’ve been wanting to watch. But when I first started looking for some of the more unusual films on The List, this was the one that seemed in many ways the most difficult to find and the most exotic. That’s not true, obviously; there are several dozen I have yet to locate, but mentally and emotionally, finding and watching this film feels like achieving the impossible, or at least the highly unlikely.

Kira Muratova’s film is…well, it’s unlike anything I’ve seen. It’s also almost impossible to talk about without getting into spoiler territory, so you can expect a spoiler tag very soon. Our film begins in black-and-white. A man is being buried, and his widow, a woman named Natasha (Olga Antonova) reacts to this in an extreme way. She becomes alternately aggressive and completely passive to the point of catatonia. Her life, essentially, ceases to have any meaning or purpose. She attacks anyone who comes near her, resigns from her hospital job and burns that bridge by overtly insulting everyone she worked with including her boss. At one point, she grabs a drunk off the street for sex, then kicks him out of her apartment. In one of the more disturbing scenes, she stands in her kitchen, slowly pushing wine glasses off the table and listening to them shatter, an act aggressive in nature but passive in the way she does it. And then…

We discover suddenly that all of this has been a movie. The first forty minutes of this film are actually a film within this film. The actress walks out on stage to take questions from the audience only to discover that the audience is leaving en masse and that no one cares to ask her anything. We’ve been scammed for forty minutes, sort of—everything that we’ve invested in so far is a fiction within the fiction. It was all to set the stage and the theme for our main story.

The rest of the film concerns Nikolai (Sergei Popov), a teacher who suddenly discovers himself unable to stay awake. He falls asleep in almost any situation. We see him first asleep in a crowded theater, then asleep in the middle of a busy concourse of a Moscow subway. Eventually, someone drags him out of the main path for foot traffic, propping him against a wall, only to leave him sleeping peacefully in a sort of extended narcolepsy. And in what will come to be a theme for the film as it continues, many who encounter Nikolai begin yawning, as if his sudden narcolepsy is contagious.

This contagion of sleepiness becomes the central theme of the film, which takes place in Glasnost-era Russia. Nikolai’s students don’t care about the English lessons he gives them, and it’s evident that he doesn’t care much about them (the lessons or the students), either. There is an overall feeling of listlessness and ennui over virtually everyone in the film. There is a grayness that permeates the proceedings—even the part of the film in color might as well be in the pseudo-sepia of the opening forty minutes. The title evidently refers to a sort of hypochondria, but really, it seems much more like a general malaise, and it’s universal. We see the kids in Nikolai’s class not paying attention, chatting with each other. Later, we see the teachers in a meeting doing the same thing.

So what is Muratova trying to say here? Is this an indictment on Glasnost? Probably, but it seems like it’s more general than that, as if there is an inherent laziness and indifference in the entirety of modern life, as if we are all seeing the world through a dirty filter. I do not know if this is a film that I can honestly say that I enjoyed; it might well be impossible to truly enjoy this film. It is an impressive film, though, one that works on multiple levels. There are sudden bursts of violent action throughout the film that are strange and shocking, made all the more terrible by witnesses simply observing and doing nothing to prevent it. There is a pervasive sickness at work here, a contagious insanity that infects everything it touches in this film world.

It’s worth noting that this film was the only Russian-made film banned in Glasnost-era Russia. It’s a film that should be seen by more people despite its daunting length and subject matter. However, I imagine it’s also a film that many people will find too trying or too slow to fully consume. That’s not a film snob comment, by the way. There have been plenty of films on this list that flew straight over my head. I think in this case, I’m simply more attuned to the message Muratova wanted to get across.

As a final note, there are some scenes near the end that are extremely upsetting, particularly if you are an animal lover.

If this is one you need, go here: The Asthenic Syndrome.

Why to watch Astenichenskiy Sindrom: It expresses something almost impossible to express.
Why not to watch: The start is there just to mess with you.
Posted by SJHoneywell at 4:12 PM