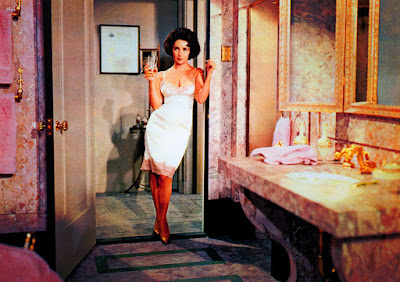 Every now and then, an actor has a string of Oscar nominations. It doesn’t always result in a win, but for Elizabeth Taylor, four was a charm. Strong performances from 1957-1959 put her close to the podium but not atop it. She finally got there in 1960 with BUtterfield 8 for a role that she hated and that she was convinced got her the Oscar in a sympathy vote thanks to a nar-fatal bout of pneumonia. By the way, the way I’ve typed the title is not a typo. The title refers to an old-school telephone exchange, and that’s how they were written.

In this case, the phone number in question is an answering service used by Gloria Wandrous (Elizabeth Taylor). Gloria is the dark version of the following year’s Holly Golightly. She’s a prostitute in all respects except that she refuses to take money for spending time with a man. In the opening sequence, she wakes up alone in a man’s apartment and explores it. She discovers her torn dress from the night before and appropriates a mink coat to wear over her slip. She also finds an envelope of money for her, a fact that offends her and makes her decision to take the mink that much more justified in her mind.

Gloria’s life outside of spending her evenings with men consists of visiting her childhood friend Steve (Eddie Fisher). Steve has his own problems. Specifically, his problem is that Gloria’s frequent presence is the reason his girlfriend Norma (Susan Oliver) thinks he can’t commit to her. Gloria also goes home to her mother (Mildred Dunnock) when she’s not spending the night somewhere else. Mrs. Wandrous knows what Gloria is like but suppresses the knowledge. Her best friend (Betty Field) is always quick with a comment, though.

But Gloria is not the only person at the center of this story. The other person standing there is Weston Liggett (butter-voiced Laurence Harvey), Gloria’s evening companion from the night before. Wes is unhappily married to Emily (Dina Merrill). His unhappiness mainly stems from her family having given him a high-paid, do-nothing job at the family company. With nothing to occupy him, Wes spends his time on drink and women, especially while Emily is out of town tending to her sick mother.

It’s no surprise here that the relationship between Gloria and Wes is a tumultuous one. It’s clear after not too long that Gloria is in love with Wes, but is conflicted in terms of how he treats her and how he thinks he sees her. Weston is clearly having his own issues, since he is obviously attracted to Gloria and feels some guilt for this and a great deal of shame for being so attracted to a woman who is in all but name a prostitute. They spend a great deal of time lashing out at each other and fighting against what they both clearly want. This is what gives the movie its narrative strength, actually. Without this, we’d only have Weston’s failing marriage to keep us interested, and it’s really not that interesting.

I think the biggest problem with BUtterfield 8 is my expectations. Elizabeth Taylor had a long and tremendous career and this doesn’t really feel like an Oscar-worthy performance. It certainly has its moments, and I won’t deny that Taylor is good in the movie, but this isn’t Taylor at her best.

However, I think the movie absolutely nails her appearance. There are moments in BUtterfield 8 where Taylor is absolutely gorgeous in the way that a 28-year-old Liz Taylor could be. And then there are moments when she appears so much older and so much more haggard, as if the hard years that Gloria has lived are starting to show up. I can only think (and hope) that this was intentional, that in moments we see the veneer and in other moments we see the cracks starting to show. It’s brilliant, so I’m going to credit the filmmakers.

Eddie Fisher is an admitted lower point. Taylor evidently insisted that he be given the role and so he was, but a more convincing actor here would have been a much better choice. This is definitely not the case with Laurence Harvey, who I always like on screen. Harvey plays this type of role well, and he’s as good here as he is in anything I’ve seen him in. In fact, he’s easily my favorite part of the film.

As I said above, I expected a lot out of BUtterfield 8 and it only delivered partially. There’s a lot good here and the idea for the story is at least mildly interesting, even if the end comes off as tacked on and a function of plot rather than character. Fortunately, it delivers enough that I think it was well worth my time.

Why to watch BUtterfield 8: It’s Breakfast at Tiffany’s gone terribly wrong and serious, but in all the right ways.
Why not to watch: The ending is unfortunate.