This is the eighth in a series of twelve movies suggested by Nick Jobe. 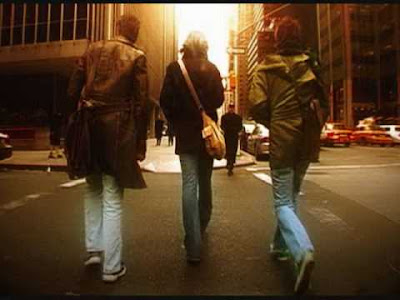 One of the most interesting stories in the music world for me is what happened to the band Wilco in 2001 and the years following. They were dropped by their label for producing an album that the company thought was unmarketable. Ultimately, the band released Yankee Hotel Foxtrot to tremendous (and deserved) critical acclaim, suffering through people leaving the band and other heartaches. Ultimately, it’s a story of a band’s dedication to their craft and the triumph of artistic freedom and vision over crass commercialism. This is documented in the 2002 film I Am Trying to Break Your Heart. How interesting, then, that the same thing happened to another band in the same time frame. Hanson: Strong Enough to Break parallels the Wilco story in a lot of ways. The two movies make interesting companion pieces for each other.

Nick’s relationship with the band Hanson—known almost exclusively for the surprise smash hit “MMMBop”—is one I understand as well. It’s a similar relationship I had with the band Barenaked Ladies. Nick knows about Hanson because his fiancée loves Hanson. I knew all about BNL because my wife was a superfan of the band for a few years, going so far as to help plan and attend a convention in Canada. So sure, I got why Nick wanted me to watch this. You can’t be immersed in that environment without either imploding or at becoming at least a marginal fan.

Strong Enough to Break chronicles the band’s attempt to create Underneath, their third studio album. What they find is that they aren’t so much creating their third album as they are being handled by their record company. The album they want to produce isn’t the album that they’re being asked to produce. So, much like the more publicized case with Wilco, they have to choose between creating the record they want to make and the record that they are being told to make. It’s a question of being commercial or sticking to their own artistic integrity. There wouldn’t be much of a documentary if they went the first route, which means you can guess where we’re going here. The band is going to stick with their own artistic ideals, which will cause rifts between them and their record company, leave them adrift for a time, and even cause some friction between the three brothers who make up the band.

And really, that’s it. There’s nothing to the story here beyond a band that once had phenomenal success struggling with their own artistic need to produce something that feels true to them and the desire of various executives who want them to try to recapture that one-hit wonder momentum and produce something that will make them a great deal of money. It sounds like a Disney plot in a lot of ways, except that it’s not. And it sounds like there’s not enough here, but there is. It works because it’s a real story, one that is compelling because it’s really happening. It also certainly seems like the sort of story that many artists have had to deal with through their respective careers.

So let’s talk about what this movie has going against it. The main thing is that, well, the common perception of Hanson is that this is a group of kids who wrote MMMBop, and this is from just a few years after their MMMBop days. There’s still very much the veneer of boy band surrounding them. It’s worth noting, though, that the entirety of the film is them attempting to break out of that image. It’s also worth noting that throughout the film, other musicians (Matthew Sweet, Carole King, and even Ed Robertson of Barenaked Ladies) show up at times. I get this—it’s a way to legitimize Hanson as something more than the kids who had a horde of screaming teeny bopper fans at the end of the ‘90s. There are a few moments like this where the film seems to be trying a little too hard, and believe it or not, the band doesn’t really need it.

The only other real issue I have here is how I watched it. The only version of this I was able to find was online, and the online version does show the whole film, but does so by dividing the film into thirteen parts and sticking a part of the opening credits in front of each section. What was a 90-minute film turned into (watched this way) closer to 100 minutes, with the same 45 seconds or so shown a dozen times. That’s not the fault of the movie, but it is an issue with the experience.

The truth is that this is a story worth seeing, because this is the kind of artistic drive and integrity we all really want in our artists. Anyone who takes any sort of artistic endeavor seriously should be willing to do anything to make it right and make it the way it needs to be made to fit with the vision. I’m not going to rush out and buy Hanson albums anytime soon, but I’m also going to freely admit that I have gained a good amount of respect for them as musicians and, more importantly, as artists. I’m not going to be a fan, but it’s impossible to see just how far Isaac, Taylor, and Zac Hanson are willing to go to not admire them at least a little.

Strong Enough to Break is, honestly, filled with music I can kind of take or leave, although it didn’t hurt my ears the way I expected it would. As a story, as a piece of actual music history, it’s worth seeing. Nick, I’m calling this a straight win, which puts you at 7 of 8. Also, you now owe me a watch of I Am Trying to Break Your Heart.

Why to watch Hanson: Strong Enough to Break: A story of dedication and redemption.
Why not to watch: If you’re me, there’s mild embarrassment in watching a film about what is perceived as a boy band.