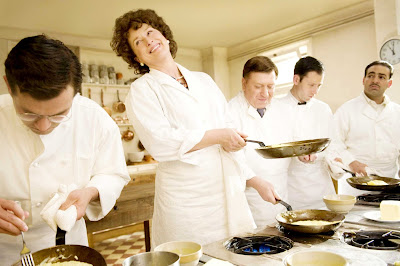 I first started contemplating the 1001 Movies project in the last half of 2009, perhaps a month or so after the release of Julie & Julia. The editor of the 1001 books is a guy named Steven Jay Schneider, which immediately led to a number of people being clever and asking me if I was attempting to replicate the plot of the movie. Honestly, nothing more than a happy coincidence.

Anyway, Julie & Julia is two stories that play out simultaneously. The first story is that of Julia Child (Meryl Streep). This story takes us through a good portion of her life, following her husband Paul (Stanley Tucci) on various embassy postings, the most important of which turns out to be in Paris. Wanting something to do, she tries a few hobbies until she decides to take classes at the Cordon Bleu. This leads to her teaching cooking and eventually collaborating on the cookbook that made her famous.

The second story is that of Julie Powell (Amy Adams), an office worker who, looking for direction in her life, starts a blog and sets out to cook every one of the 500+ recipes in Child’s “Mastering the Art of French Cooking” in the space of a single year. There will naturally be ups and downs in this story and a good amount of conflict with her husband Eric (Chris Messina).

I generally do a plot rundown in this posts, but I’m not going to this time, or at least not much of one. The truth is that Julie & Julia is two very different movies under the same title, and my reaction to these two movies is entirely different. Bluntly, there’s the half of this that I thought was great—sweet, entertaining, and heartfelt. The other half of this movie, frankly, I didn’t like much. I’ll make it easy. Every time the movie focuses on the story of Julia Child learning to cook, dealing with writing the book and getting it published, and exploring the relationship she has with her husband and with her co-authors Simone Beck (Linda Emond) and Louisette Bertholle (Helen Carey), I wanted the movie to stay there. That’s what was interesting to me, and what was worth watching. Every time we jumped into the modern world, I wanted to get back to Julia Child.

I rather like that the film doesn’t focus much at all on Child’s career on television. Instead, it looks at really what was the formation of her persona in the kitchen and the difficulty in creating the cookbook and getting it published. It would be difficult to watch this and not come away with a certain level of admiration for Julia Child. This was a woman who, despite a number of odds against her early on, was fearless in the kitchen, who loved food, and who had a real wit and joy in her life. It’s impossible to watch this and not want to track down episodes of The French Chef on YouTube (and there are plenty of them).

When we switch to the modern story, the film loses a great deal. The main thing it loses is the unassuming brilliance of Julia Child. And that’s the real issue with the film. Julie Powell is an unpleasant person and comes off as a narcissist. It’s worth noting that in the year or so before she died, Child was aware of Powell’s blog and thought it was a stunt and that Powell should have spent more time discussing what she thought of the food that she made and what she learned from the various recipes. I never read Powell’s blog, but I can’t help but agree. It would seem to me that the learning process and especially the food itself should be front and center. If Powell was instead just discussing her journey without discussing the actual nature of the journey, it would seem to be an exercise in self-aggrandizement.

And that’s really the pity here. Had this been a film strictly about Julia Child, her relationship with her beloved husband, and the process of putting together her first cookbook, I’d have loved this movie. Powell’s take on Child’s cookbook really does come across feeling like a stunt. She makes the recipes, but we never really get the sense that she got anything out of it but making the recipes. It feels like a quest for validation, not experience or knowledge.

This naturally brings up the question of why I do what I do, then. Am I doing this for validation? I’m going to have to be a little meta here, which is something I don’t do very often, but I think this movie requires it. I blogged in pretty much isolation for about a year and eventually found a small audience that has changed a little over the last few years but hasn’t really grown in any significant way. But from the start, I’ve done this for myself. I’ve done this as a way to document my experiences with movies. I’ve also focused as much as I could on the movies rather than on me watching the movies. And that’s really where I object to Powell’s side of the story.

Bottom line? The performances are good. There are some nice cameos from Jane Lynch and the always entertaining Frances Sternhagen, but neither are in the film enough. Fortunately, we spend more time with Julia than we do with Julie. If we could just get this to where we spend all of our time with Julia, I’d like this even more.

Why to watch Julie & Julia: Julia Child was an international treasure.
Why not to watch: While Julia is wonderful, Julie…not so much.