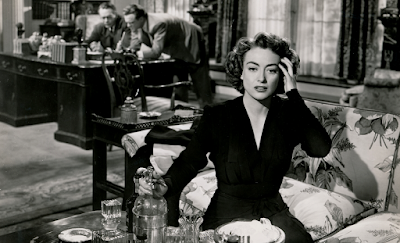 Say what you want about Joan Crawford and the reliability of the “Mommie Dearest” memoir, the lady could act. There’s lots of good Joan Crawford out there, but for me, the best Joan Crawford is crazy Joan Crawford. And so it was that I was really excited about the possibilities contained within Possessed where she plays a woman suffering from schizophrenia. It was either going to be an entertaining but complete train wreck or it was going to be sublime. The truth, as with most things, falls between those two possibilities, of course, but Possessed is more success in some ways than failure.

The film starts with a woman named Louise Howell (Crawford) wandering the streets of Los Angeles looking for a man named David. She’s eventually rounded up and sent to a hospital where it is determined that she’s got some significant mental issues going on. A little medication later and Louise is ready to recount her life story, which means that the rest of the film is going to be in flashback to get us to Louise showing up in the hospital.

So we jump back a few years to Louise being employed as a nurse. She is employed by a man named Dean Graham (Raymond Massey) to care for his invalid wife. While in that capacity, Louise begins spending a great deal of her time with an engineer named David Sutton (Van Heflin). Louise is madly obsessed with David, who finds her smothering. In fact, he is so put off by Louise that he takes a job in Canada to escape her. Without him around, Louise’s obsession with him goes into simmer mode. Eventually, Graham’s wife kills herself since she was more than a bit on the nutty end, too. Graham’s daughter Carol (Geraldine Brooks) is convinced that Louise was central in her mother’s suicide and that Louise has designs on her father.

In fact, the opposite is true. Dean Graham keeps Louise employed to look after his young son, and eventually, he proposes to her. Louise doesn’t want to accept his proposal and admits that she doesn’t love him. But she manages to iron things out with Carol and she does eventually marry Dean despite still being in love with David. This would be a dull movie if we stopped there, though, so David naturally shows up. Louise continues to make a play for him and he continues to be disgusted by her. Worse for Louise, David and Carol show and interest in each other and begin a slowly building romance.

Where Possessed succeeds is in the depiction of Louise’s madness. We get a few entire scenes that are shown to be hallucinations and taking place entirely in Louise’s head. For instance, at one point Louise leaves a concert early, leaving David and Carol alone at the theater. We see Carol come home, kiss David, and then confront Louise about her mother’s death, to which Louise admits being complicit. And then, we see Carol come home again, not kiss David, and express concern for Louise’s health. It’s done seamlessly, and we buy the first version because there’s absolutely nothing that indicates that the first version is entirely inside Louise’s shattering psyche.

The sell of Possessed is clearly Joan Crawford, who is magnificent. Crawford is at her best in the flashback scenes when she isn’t near-catatonic in the hospital bed. We’re able to track just how much her mind is starting to fragment simply by the way she is acting in each scene, and she plays these scenes beautifully. I wasn’t kidding at the top when I said that the best Joan Crawford is crazy Joan Crawford. In fact, Possessed is exhibit A.

Everyone else, though, is merely serviceable. We don’t get a great deal of reason for David’s pure contempt of Louise, for instance. Yes, she comes on a little strong in the first scene and in 1947 the idea of a married woman this aggressively pursuing another man was distasteful, but David moves from loving Louise in some respect to loathing her immediately, and manages to keep up that loathing after years of separation. For his part, Van Heflin is fine, as are Raymond Massey and Geraldine Brooks, but none of them is particularly enthralling.

The film also dips heavily into melodrama, and most of the cast simply can’t make that work. Crawford pulls it off, but the rest don’t.

I enjoyed Possessed a great deal, but I did so entirely because Crawford is brilliant and on screen for virtually every frame. It’s a film that is greatly improved by playing around with the idea of film noir and hitting some of those same sensibilities. Make it a little less melodramatic and clean up the very unsatisfying last few minutes, and we’d have a film that would be a lot more talked about today than it is.

Why to watch Possessed : Joan Crawford in full psycho mode.
Why not to watch: The ending is unsatisfying in the extreme.