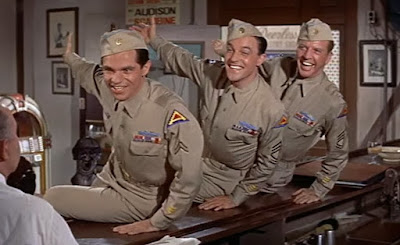 When I started this blog, I was a dedicated musical hater. My position has certainly softened in that respect over the last six-plus years. There are plenty of musicals that I like these days, but it’s still a genre that is more likely than most to leave me cold. When I think of a musical that doesn’t work for me, one like It’s Always Fair Weather is the kind that I tend to think of. And yet there are aspects of this film that really work for me. Does that mean I’m conflicted? Kind of.

We start in 1945. The war is over and a trio of soldiers has returned to New York. Ted Riley (Gene Kelly), Doug Hallerton (Dan Dailey) and Angie Valentine (Michael Kidd) show up at their favorite bar for a final night before going their separate ways. As it happens, Ted gets a “Dear John” letter that very night and goes on a bender accompanied by his two friends. They hit club after club and eventually wind up where they started at closing time. When the barman (David Burns) tells them that they’ll forget about each other, they make a pledge to return to the same bar ten years to the day at noon to reunite. The highlight here is a dance number the includes the three hoofing with a trash can lid attached to one foot.

Flash forward those ten years, and we discover that each of the three men has let his dreams and ambitions die a slow and painful death. Doug’s dream was to go back to Europe and study art; instead, he’s drawing cartoon characters for an ad agency and has a wife who wants to divorce him. Angie wanted to open a classy restaurant; instead, he’s running a hamburger stand. Ted has fallen the furthest. Once dreaming of a career in law and politics, he’s become a gambler and a boxing promoter. But, the three men dutifully return to the bar on the appointed day and reunite. And they discover something that is truly shocking for a film released in 1955: they not only have nothing in common, they no longer like each other.

That can’t be the end, though, right? It’s not. As it happens, Doug’s company sponsors a maudlin television program to promote a cleanser. A part of the show is sort of a “This is Your Life” moment where someone is reunited with another person or has a dream fulfilled. When host Madeline Bradville (Dolores Gray) balks at that night’s guest, producer Jackie Leighton (Cyd Charisse) comes up with the idea of having Ted, Doug, and Angie step in, not realizing that their reunion was a complete bust.

There’s also a subplot about Ted’s current fighter getting mixed up in a plan to take a dive, and of course there’s going to be a romance between Ted and Jackie, since the other two characters are married. These are the plots that drive the action on screen, even though the film is really about these three guys who have grown completely apart in their ten years of separation and the slow deaths of their dreams.

It’s worth saying that It’s Always Fair Weather gets a great deal right. This is a movie that in large part is designed to make fun of the 1950s boom in television. Dolores Gray’s Madeline is one of those movie characters that is so extreme that she can’t really be believed, but is comic nonetheless. She’s overly dramatic and flighty and wants nothing more than for people to love her constantly. She needs attention all the time and to be loved by everyone all the time. In a way, it’s a spoof on the idea of fame itself.

It’s also interesting that the film is, in many ways, an unhappy one. With two of our main characters, we learn over the course of the film that they are not only disappointed in their friends but that they are disgusted with themselves for living the lives they have. Ted and Doug come to the realization over the course of the film that they have sold out completely and that they are actually embarrassed at the lives they have. We don’t spend enough time with Angie to see if he comes to the same realization, but we do get a few hints in this direction.

There are some comic moments that really work, too. Dan Dailey’s big moment is a tremendous few minutes of film and something that may have been almost unique in film of this time. He gets a comic song and dance number that is, when the lyrics are examined, truly depressing and awful. This is dark comedy and it’s dark comedy that works.

Finally, of course, there’s some great dancing. This is the film in which Gene Kelly tap dances on roller skates. If for no other reason, it’s worth watching for that, even if in many ways this is more Dan Dailey’s film.

So what does it do wrong? There’s something about it that simply feels off. The plot points are too forced, for instance. The love affair between Ted and Jackie doesn’t really work for me. In fact, Jackie is a blend of done-right and done-wrong. High marks to the film for creating (in 1955, no less) a woman character who starts out as career-focused and who actively doesn’t want a man. She’s also a character who is smarter than everyone else on screen, and that’s pretty exceptional, too. But she’s unbelievably so—she knows everything. It’s a bit much. Even the fact that Cyd Charisse gets one of the best musical and dance numbers doesn’t change this fact. But it all seems tonally off somehow. Despite the fact that there are three or four knock-out musical numbers, I can’t help but think this would have been better if it weren’t a musical.

What really tweaks me, though? You’ve got Gene Kelly and Cyd Charisse in the same movie. You’ve got them in a movie where they become a romantic couple. And you don’t have them dance together? I haven’t been that disappointed in a musical since finding out that that Henry Belafonte and Dorothy Dandridge were dubbed in Carmen Jones.

Why to watch It’s Always Fair Weather: Gene Kelly tap dances in friggin’ rollerskates and the ending is surprising for 1955.
Why not to watch: Cyd Charisse and Gene Kelly don’t dance together? Seriously?

Posted by SJHoneywell at 5:10 PM