Films: In the Name of the Father
Format: DVD from NetFlix on laptop. 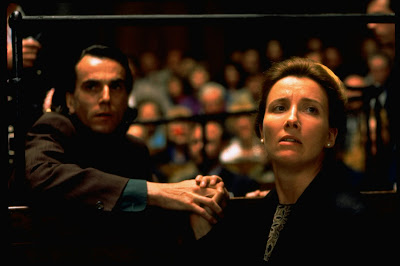 There’s a weird little subgenre of films that consist of people being wrongfully accused of crimes, being arrested, and then having to fight the system to prove their own innocence. Sometimes, we get a pretty solid action movie like The Fugitive. Other times, we focus on the lawyers like in A Few Good Men. Most of them, though, are more along the lines of In the Name of the Father about the experiences, botched trial, prison sentences, and eventual exoneration of the Guildford Four and the Maguire Seven. Don’t know them? Well, you probably would if you were British or especially Irish.

Back in the 1970s, Gerry Conlon (Daniel Day-Lewis) was a petty thief in Belfast, Northern Ireland. While the IRA was fighting the British Army, Gerry was stealing scrap metal for money. After a run-in with the police nearly gets him killed and almost starts a riot, his family decides that it’s time for him to get out of Belfast. His father Guiseppe (Pete Postlethwaite) and mother (Maureen McBride) send him off. On the trip, he encounters his friend Paul Hill (John Lynch) also headed to London. Once there, Gerry foregoes staying with his aunt and instead the pair moves into a hippie commune.

Here’s where things start to collide. While Gerry and Paul make friends at the commune, Gerry in particular makes a very good friend of a young woman (Saffron Burrows). At the same time, The IRA has stepped up its campaign of bombing various parts of London, including pubs that are frequented by British soldiers. At the time of one such bombing, Gerry and Paul have left the commune, and are turned in by another member who was evidently jealous of Gerry’s success with that young woman. As it happens, on that same night, the pair find a purse dropped by a prostitute. Gerry uses her keys to break into her apartment and steal 700 pounds, which allows him to return to Belfast.

That won’t last long. He’s arrested for the bombing, and because of the British laws, he is held for seven days without being charged. After a variety of tortures and threats, he signs a confession despite having nothing to do with the actual bombing. Paul Hill is arrested, too. In fact, so are other members of the commune, his aunt, two of his cousins, and even his father, who has come to London to try to free his son. Of course, none of them had anything to do with any of this, but it doesn’t stop them all from being convicted and given a variety of sentences. After all, the complete miscarriage of justice is the entire point of the film.

Worse, we’re eventually introduced to the actual bomber who confesses the crime to the same police officers who arrested and worked for the conviction of the Conlons. And, naturally enough, eventually a lawyer named Gareth Price (Emma Thompson) gets involved to try to get the Conlons actual justice.

So let’s get to the meat. In the Name of the Father is all about the performances for me. The story is tragic, of course, but after enough of these miscarriage of justice movies, you start to see exactly where the plot is going to go long before it gets there. There are really only two possibilities here. Either the Conlons are going to eventually be retried and exonerated or they’re still going to be languishing in prison and the film is another plea to get the out. The only real question here is if everyone is going to get something like justice or if we’re going to leave the film with an extra dose of moral outrage.

The performances, though, are another matter. In the Name of the Father is one of those rare films that managed three nominations for acting: Day-Lewis for Best Actor, Thompson for Best Supporting Actress, and Postlethwaite for Best Supporting Actor. Of the three, Thompson’s nomination is perhaps the weakest, but that is only because it is also the smallest of these three roles. She comes into her own in the closing 10 minutes or so of the film, and this is what sells her for the rest of the film.

Day-Lewis is brilliant, of course, because he always is. But it’s Pete Postlethwaite who has the role as the film’s moral heart and center. Postlethwaite was a sadly underknown actor, the sort of many who could play any role thrown at him, from crooked lawyer to priest to coal miner. Here, as a man possessed of nothing but his own dignity, he is one of the few people who can hold his own with and become more interesting than Daniel Day-Lewis.

In the Name of the Father is designed to make you righteously angry, to cause you to become incensed at the excesses of legal power that can be used against people unlucky enough to be the wrong nationality in the wrong place and at the wrong time. It’s a reminder that our legal systems aren’t as good or as fair as we’d like to think they are, and that innocent people can be convicted of crimes because of incompetence, desperation, racism, and the inability of others to admit fault.

This is a good film, despite its licenses with the real story, but it’s not a great film. It’s worth noting that it’s a good film with some great performances, though.

Why to watch In the Name of the Father: Great performances.
Why not to watch: It’s genetically engineered to rile you up.