Films: Greystoke: The Legend of Tarzan, Lord of the Apes
Format: DVD from NetFlix on rockin’ flatscreen. 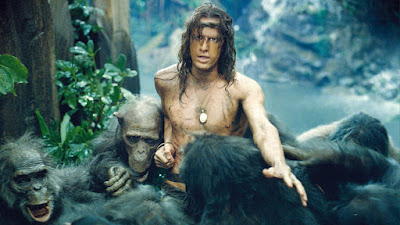 I remember when Greystoke: The Legend of Tarzan, Lord of the Apes was released. I was interested in seeing it for the simple reason that I grew up reading a lot of pulp novels. I read a few Tarzan books by Edgar Rice Burroughs and a lot of other Burroughs besides. Certainly I was curious. Having seen it now, I’m kind of glad I didn’t see it in 1984. I’m not entirely sure what my opinion would have been. There’s a part of me that thinks I would have appreciated how much it sticks to the actual story created by Burroughs. There’s a larger part of me that thinks I’d have been really disappointed with just how dull the whole thing is.

Yeah, it’s dull. I said it and I’d say it again if I had to. One would think that a movie about Tarzan (which, by the way, he is never called in the entire film) would involve jungle action, fights with wild animals, and all that sort of joy. No soap. Greystoke instead attempts to follow the book as closely as possible, and the first Tarzan book from Burroughs is mainly an origin story, and not much happens beyond learning how Tarzan grew up.

So, quick backstory. John, Lord Clayton (Paul Geoffrey) and his pregnant wife (Cheryl Campbell) go on a long venture, but are shipwrecked off the African coast. They survive, albeit temporarily. Alice succumbs to malaria soon after giving birth. Shortly thereafter, John is killed by an ape, who takes the infant with him and gives him to another ape who has lost her child. And thus the newest heir to the title of Earl of Greystoke is now being raised by apes. We see a little of him growing up and discovering the shelter that his father built. Fast-forward a few years and suddenly the boy is Christopher Lambert in his first English-speaking role.

Tarzan, despite not being called that in the film, is eventually discovered by a Belgian explorer named Phillippe D’Arnot (Ian Holm), the only survivor of an expedition attacked by a group of natives. D’Arnot discovers Tarzan’s real identity and slowly teaches him some English. Eventually, the two make it to civilization and return to England, introducing Tarzan, now named John Clayton, to his grandfather (Ralph Richardson, who was nominated in a supporting role), and his grandfather’s ward Jane (Andie MacDowell, but voiced by Glenn Close). Jane continues to instruct John in English and the two naturally become attracted to each other.

There’s a lot here that needs to be commented on. First, a great deal of the film’s budget was spent for the ape suits worn by a variety of people in the film. I would imagine that these were state-of-the-art and impressive in 1984, but they seriously show their age today. They look exactly like what they are—people in ape suits, mildly reminiscent of (but better than) the ape suit at the end of Trading Places. They look goofy. I know they’re not supposed to, but they really do.

Second, the film has decided that John Clayton is a near-perfect mimic. This means that he can accurately replicate any animal sound that he’s heard. What this means is that throughout the movie, Christopher Lambert opens his mouth and someone plays a recording of a lion roaring. This is roughly as goofy as the ape costumes.

Lambert is actually pretty good here. He’s asked to essentially be a human ape through much of the film, reacting to different situations as an ape would, and it mainly works. It’s odd to watch a grown man throw his arms around his head and “ook” at someone, but based on the premise, Lambert is pretty good at it.

The truth, though, is that Greystoke is a complete mess. Watching someone learn English words makes for dull footage. And really…Andie MacDowell? Sure, she was pretty enough in 1984, but they couldn’t find an actress who looked good in early 1900s costumes and could actually say the line without sounding like she’d just come from a hoedown? Nothing here works.

I seriously don’t know what I would have thought in 1984. There’s a part of me that thinks I might have defended it simply because I’d have wanted to defend the honor and integrity of Edgar Rice Burroughs. I tilted at more than a few stupid windmills in my youth and got worked up about stupider things. Still, I think it would be hard for someone raised on Star Wars and Raiders of the Lost Ark to really see this with anything like an appreciative eye. Greystoke commits the biggest sin it can: it takes a traditional action character and makes him boring.

Why to watch Greystoke: The Legend of Tarzan, Lord of the Apes: It’s certainly pretty.
Why not to watch: It’s also really dull.

Posted by SJHoneywell at 6:39 PM