This is the seventh in a series of twelve movies suggested by Chip Lary. 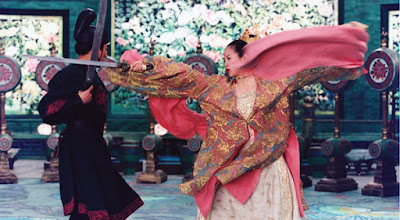 There was a time around the turn of the last century when wire fu and wuxia films were a thing. The Matrix and Crouching Tiger Hidden Dragon probably started the trend, which seems to have ended with House of Flying Daggers (or Shi Mian Mai Fu). There’s something dreamy about wire fu films and the way the characters move. I like everything about the style—I like the action, I like the way they are filmed, and I particularly like the kick-ass fight scenes that are filmed in a way that the audience can actually follow the action.

What I was expecting was something that looked a great deal like Crouching Tiger both in terms of visual style and plot. I kind of got that, but kind of didn’t. House of Flying Daggers posits a world closer to Hero in terms of the plot, but gives us a love story closer to Crouching Tiger. There’s a veneer of political intrigue here, a sort of social McGuffin that causes the rest of the plot to happen without really being that critical to the plot that we care about.

The overriding plot tells us that the Tang Dynasty is declining, which has caused the rise of a number of rebel groups including the House of Flying Daggers. Two police officers are charged with finding the head of the group and bringing him down within 10 days. Since Leo (Andy Lau) and Jin (Takeshi Kaneshiro) have no leads, this seems to be an impossible task. They do get a lead, though—a local house of prostitution. Jin poses as a customer and he encounters Mei (Zhang Ziyi), a blind courtesan, who is subsequently arrested and determined to be the daughter of the former leader of the House of Flying Daggers.

Mei is then broken out of prison by Jin, who claims to admire the Flying Daggers, but is actually hoping that Mei will lead him back to the group so that he can assassinate the leader. A few staged ambushes later, and Mei begins to trust Jin, a trust that deepens when real ambushes from the local military overtake the fleeing pair. All of this is overseen by Leo, who is also hoping that Mei will lead them to their goal.

What follows is a series of double crosses and double agents. The entirety of the film boils down to a love triangle between Mei, Leo, and Jin that becomes increasingly convoluted as the film continues. All of the political intrigue promised at the start of the film is left in the background as the focus shifts to the resolution of the love triangle. In this respect, it is similar to Crouching Tiger, because the love story becomes the story that we care the most about, or at least the story that I cared the most about.

Love stories and love triangles exist in numbers without measure in film, though, so while it’s certainly capable of keeping our attention, that’s not the reason to watch House of Flying Daggers. No, it’s all about the wire fu and the visual beauty of the film to keep us caring about the plot. There are plenty of good fight sequences here. This is another film that I would like action movie directors to watch on a loop—movies like this one film action well. We get most of the fights from a middle-distance shot so we can actually see what is happening. We get longer takes so the action is more than just a series of flashing images.

House of Flying Daggers is, for all of its sweeping scenery, a small film. It’s not easy to spot this when we have huge set pieces like a spectacular fight in a bamboo forest. The reality of the film is that it’s a bit disjointed in this respect—it’s a small love story told on a grand and epic scale. It all works, almost in spite of itself, because the different parts of it do work, but they work separately rather than together.

It also moves surprisingly quickly. The film still felt like everything was being set up when more than half of it was over. My guess is that this is because the initial belief of the audience (or at least me) is that we’ll be getting a great deal of political maneuvering and instead, it’s all about the love story.

Why to watch House of Flying Daggers: Spectacle.
Why not to watch: It’s not focused in the way you expect.

Posted by SJHoneywell at 6:50 PM