Three years ago, I posted a review of the 1932 movie The Goddess. As was my habit, I gave the review a goofy title. In this case, since this film was a sort of fable and took place in China, I called the review "Once Upon a Time in Shanghai."

As it happens, that's the name of another movie. It's worth noting, incidentally, that my review was published on September 20, 2013 and the movie of that name was released the following year. Regardless, the film company that owns the rights to that movie decided that I somehow was offering free downloads of their film and slapped me with a DMCA notice.

I'm not a film pirate. I support a film company's right to go after anyone stealing their product to the fullest. But this? This is stupid. Now, anyone who took more than six seconds to actually look at the original review and my site would see exactly what happened. The company cast a wide net and caught me even though I'm blameless here and no one bothered to take those six seconds to see if I'm actually a criminal or if this was just a weird coincidence of me picking a name for something and them picking the same name. The fact that my original post was a year before their movie release should be an indicator. However, not everyone actually does his or her job.

Could I fight this? Sure. But I don't need the hassle and I really don't need the expense. So I'm deleting the old post and reposting the review under a new name. Why? Because this not only retitles the review, but it changes the URL. So, someone else's slipshod pursuit of his or her job has forced me to jump through unnecessary hoops. And because I'm not a film company or fabulously wealthy, I'm taking the cowardly (but also easy and free) way out.

Anyway, DMCA notices suck when they're this unwarranted. 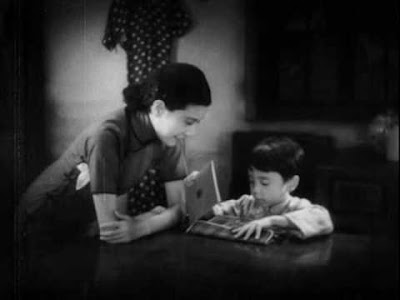 1001 Movies bloggers should be at least passing familiar with Ruan Lingyu, since her life and tragic death are the subject of one of the films on The List. Alternately called The Actress and Centre Stage, that film uses clips from some of Lingyu’s work intermixed with re-enactments of her personal life. Because of this, there’s a particular joy in getting a chance to see a full film of hers in Shen Nu (The Goddess).

Shen Nu tells the story of an unnamed mother (Ruan Lingyu) who makes her living as a prostitute (and because she’s unnamed, I’ll simply refer to her as “Goddess” from this point forward). Naturally, this is a difficult life made much more difficult by the presence of her son, Shuiping. Her need to make money requires her to depend on neighbors to watch after her son, and of course the police are a constant problem. A close encounter with a police officer is what causes the plot to begin. On the run from a cop, she ducks into a house where she meets a gambler (Zhang Zhizhi). Since he has protected her, he claims ownership over her, essentially becoming her pimp by default.

Unfortunately for Goddess, it’s not difficult for the gambler to get leverage over her. He tells her that if she doesn’t continue to supply him with money, he’ll take away Shuiping. For whatever her faults and the problems of her occupation, the film emphasizes that Goddess is the best mother she can be, and certainly better than most would be in this situation. She fights back as best she can, by hiding her money behind a loose brick in the wall of her apartment.

Goddess’s troubles are exacerbated several years later when Shuiping is old enough to go to school. Wanting the best for her boy, she enrolls him in school. This causes trouble when the other parents realize exactly what Goddess does for a living, and they demand his expulsion from the school. The school’s headmaster (Keng Li) goes to find out the truth, discovering that Goddess truly loves her son. Unable to see penalizing the boy for his mother’s life, the headmaster is forced to resign and Shuiping is expelled anyway.

This sets up the third act in which Goddess is forced to act in a way to protect her son, up to the greatest sacrifice she can make for him. I won’t go into too much detail here, because this is the sort of thing that could go in a couple of directions, and it’s better for the viewer to see the conclusion on his or her own.

Shen Nu is the sort of melodrama that silent movies were made for, and don’t think for a second that it’s not straight melodrama. Despite her profession, Goddess is someone we are supposed to like. For the most part, this isn’t much of a chore; she’s likable primarily because of the performance by Ruan Lingyu. It’s not difficult to see why she was considered such a noteworthy actor for China at the time. She is compelling even if the story is pretty standard stuff, with definite good people who are all good (like the headmaster) and bad people who are nothing but bad (like the gambler). What it lacks in complexity, it makes up in Lingyu’s performance.

This is a good thing, because there’s not really a lot else going on her. Shen Nu is pretty short, which means we don’t have a great deal of time to set anything up. Even if we did, there aren’t a lot of surprises in terms of the overall story here. This is the story of a woman torn apart by her situation who does the best she can do, and for whom circumstance is the biggest enemy. In that respect, it’s not so different from a film like Stella Dallas.

On a completely objective list of great films, I don’t think that I would include The Goddess even if it is the best surviving example of Ruan Lingyu’s work. It feels much older than it is—the Chinese film industry was still stuck in the silent era more than half a decade after talkies had premiered around the rest of the world. It feels almost amateur because of this. However, The List is at least partially subjective, and I understand the value of The Goddess. Leaving Ruan Lingyu off completely was a mistake for the first nine editions, just as not including a Valentino film was a mistake.

That’s really the value here. It’s not the by-the-numbers story or the melodrama that needs to be seen, but the pre-eminent Chinese actress of the time at the height of her career.

Why to watch Shen Nu: Ruan Lingyu deserves an hour of your time.
Why not to watch: The ending is inevitable, and not in a good way.

Posted by SJHoneywell at 6:34 AM