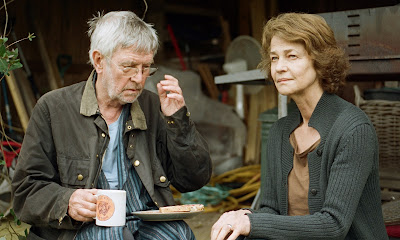 One of the things I love about movies is that they can present us with a story that perhaps couldn’t be real and yet still presents a very human story. That’s certainly the case with 45 Years, where we get a story that is just on the edge of being believable, but uses that fantastic tale to present us with something that is very real and surprisingly affecting. The audience needs to come to this with a certain amount of willing suspension of disbelief. Once we’re willing to do that, the story can play out in front of us.

In 45 Years, we have a couple approaching their 45th anniversary. Kate (Charlotte Rampling) and Geoff Mercer (Tom Courtenay) didn’t really celebrate their 40th anniversary because Geoff was ill. Now, they are planning a party that will involve a great deal of their small town. While Kate continues to prepare for the celebration, Geoff gets a letter that changes everything. This is the suspension of disbelief part.

Years before, even before Kate and Geoff met, Geoff was involved with a woman named Katya. While the two were hiking, Katya fell into a ravine. Now, more than fifty years later, global warming has melted enough snow and ice in the area that Katya’s body has become visible in a glacier. Geoff is naturally affected by this in a number of ways. It’s a reminder of his own mortality for starters, a reminder of his distant past and an old life long forgotten. For Kate, it’s a stark realization that her husband had a life before her, and that she wasn’t always the most important thing in his life.

She admits that it’s difficult for her to be upset with Geoff over something that happened in his life before she even knew him, but with the party coming and Geoff’s sudden dark introspection, this sudden appearance of Katya’s body affects her severely. It is almost like discovering an affair in the inexplicable wedge that it seems to drive between them. Kate becomes mildly obsessed with Katya, feeling as if her life and her marriage are suddenly overwhelmed by this ghost from the past.

This is a feeling that is driven by several admissions from Geoff. The first is that he was notified about the discovery of Katya’s body because he was listed as the next of kin. He and Katya has posed as a married couple to be able to stay in the same room during their trip; it was in the 1960s, after all, and social mores were what they were. The second admission is that Geoff says that had Katya lived and had the two of them made it to Italy as planned, he would have married her. In Kate’s mind, this realization seems to negate the 45 years she has spent with her husband. Geoff’s moodiness as the days continue doesn’t help.

45 Years is clearly a story about this couple suddenly in crisis, but it is much more Kate’s story than Geoff’s. Everything we see comes from Kate’s point of view. We see her dealing with this sudden realization of her husband’s past and see how she deals with it. At the same time, we see Geoff’s coming to terms with his past only in terms of Kate—what she sees and how she sees Geoff. This is clearly Charlotte Rampling’s film, with Courtenay providing pitch-perfect support for her as she goes through Kate’s struggle.

As this is Charlotte Rampling’s film and since her performance is the reason 45 Years arrived on my Oscar list, I should really focus on her. This is the kind of film that requires someone to be at the absolute top of her craft to make work. In one scene, Geoff is out for the day, and Kate climbs into the attic to discover a slide projector and the slides of Geoff’s trip with Katya. As the scene goes on, we see only a part of the slides and Kate’s face. As she advances each slide, the screen goes dark, and with each new slide, we see the complete range of emotions play out on her face silently, slowly, and perfectly. It’s perhaps the best example of real acting—no words, just pure emotional reaction—I have seen in some time, and it’s not the only time this happens in the film.

Having said that, I think it’s worth mentioning Andrew Haigh’s direction as well. I don’t think there’s a frame of this that doesn’t feel purposeful or where I think the camera is out of place. It’s the sort of film that benefits from a minimum of directorial input, and Haigh had the intelligence to get the shots he wanted and let the actors on screen, Rampling and Courtenay for the vast bulk of the running time, do all the work of telling the story. It’s exactly the kind of directorial performance that frustrates me when it ends up nominated, but exactly the sort of work that more directors should do in dramas like this one.

45 Years is a small film and it is potentially hampered by a strange premise. It is smart enough to remain a very human film with very human characters, though, and this is what makes it worth watching. Well, that and Charlotte Rampling’s staggering performance.

Why to watch 45 Years: Charlotte Rampling and Tom Courtenay are heartbreaking.
Why not to watch: While the emotions are real, the premise may feel artificial.

Posted by SJHoneywell at 8:06 PM