Blood is Thinner than Water 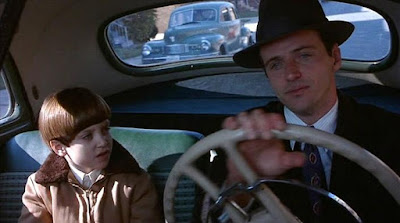 I find slice of life movies difficult to review. They’re difficult because in many cases, they don’t really go anywhere. We get a chunk of somebody’s life, or several somebodies’ lives. And then it ends. I realize that this is certainly a lot closer to the way the real world works. We don’t all have storylines with a beginning, middle, and end. But movies do. That’s one of the things that’s great about them. So, when I get a movie that just takes a chunk out of a life and puts it on the screen, I feel like I don’t get a complete story. This is exactly the case with Avalon.

Like a handful of other Barry Levinson films, Avalon is at least semi-autobiographical. In this case, it’s more about Levinson’s family and less about his own personal experience. It appears to be more or less the story of his grandfather and his life in Baltimore starting in around 1914. Using his grandfather’s experience and the experience of his family, Levinson is more or less recounting the story of the Polish Jewish immigrant experience in the United States from around the start of World War I.

So what happens? Well, grandfather Sam Krichinsky (Armin Mueller-Stahl) and his wife Eva (the always-wonderful Joan Plowright) raise their family with Sam working in the family business as a paper hanger. Their son Jules (Aidan Quinn) changes his last name to Kaye to get away from the obvious foreign (and possibly Jewish) connection to the traditional last name. Jules’s cousin Izzy Kirk (Kevin Pollak) go into business together, opening department stores that specialize initially in the budding technology of television and eventually attempting to revolutionize the world of retail by guaranteeing the lowest prices in Baltimore.

Part of the film is told through the eyes of the son of Jules and Ann (Elizabeth Perkins), Michael (a very young Elijah Wood). Michael doesn’t really understand the world around him much, and so great deal of the film comes from a fairly naïve point of view. When Jules’s and Izzy’s business starts to take off, the family moves to the suburbs, breaking up the larger Krichinsky/Kaye/Kirk family that originally lived together in a place they called Avalon. Things go well until the cousins open up a huge warehouse store with their guaranteed low prices. The first day of sales goes well, but the building catches fire, and Izzy has let the insurance lapse to pay for advertising and other expenses.

The bulk of the film concerns family relationships. There are several that are key to the film’s unfolding. The first of these is the relationship between Eva Krichinsky and her daughter-in-law Ann. Ann feels overwhelmed by the forceful and opinionated personality of Eva. She can do nothing to her mother-in-law’s satisfaction and always feels like she is being judged. Eva won’t even get in the car if Ann is driving, and when the car is destroyed in a freak accident, Eva sees this as vindication for not riding in the car with Ann behind the wheel. This relationship is part of the reason that part of the family moves to the suburbs.

The really central relationship is between Sam and his brother Gabriel (the underrated Lou Jacobi). The two seem to disagree with each other on many things, but eventually, a rift forms between them when, at a Thanksgiving dinner, Gabriel arrives late and Sam has the turkey carved before his brother arrives. This incident then colors everything that happens between the two brothers from that point forward. The extended family meets regularly to continue to bring other family members from the old country to the States. This is one of Sam’ role in the family, one that he gives up when he breaks from the family completely after yet another argument that goes back to the fateful Thanksgiving.

And that, really, is it, and that, really, is a problem. I know that families often split up for what is ultimately stupid reasons, but this is relentless. It reminds me of an old line from a Woody Allen story when one character comment on the “exoticness” of Jews, he respond by wondering about how people who endlessly argue about how close to sit to the television could be considered exotic. Arguing is constant in the film, and all of it is petty bickering. There are more and more intense arguments about feeding the dog at the dinner table than about the complete destruction of a massive warehouse full of merchandise.

Where the film succeeds is in its cast list. This is a good cast all the way through. I tend to always like Joan Plowright, and I like Kevin Pollak in almost everything I’ve seen him in, particularly in roles the run a little more dramatic. It’s very interesting seeing Elijah Wood at this stage. The roles are well handled throughout.

But ultimately, I don’t care about the story, or the people, or the experience. Sure, immigrant stories are important, but I don’t think that Avalon does anything that can’t really be found in other movies that are almost certainly more interesting and more accessible, or at least easier to find than this one.

Why to watch Avalon: Good casting and performances.
Why not to watch: It doesn’t really go anywhere.